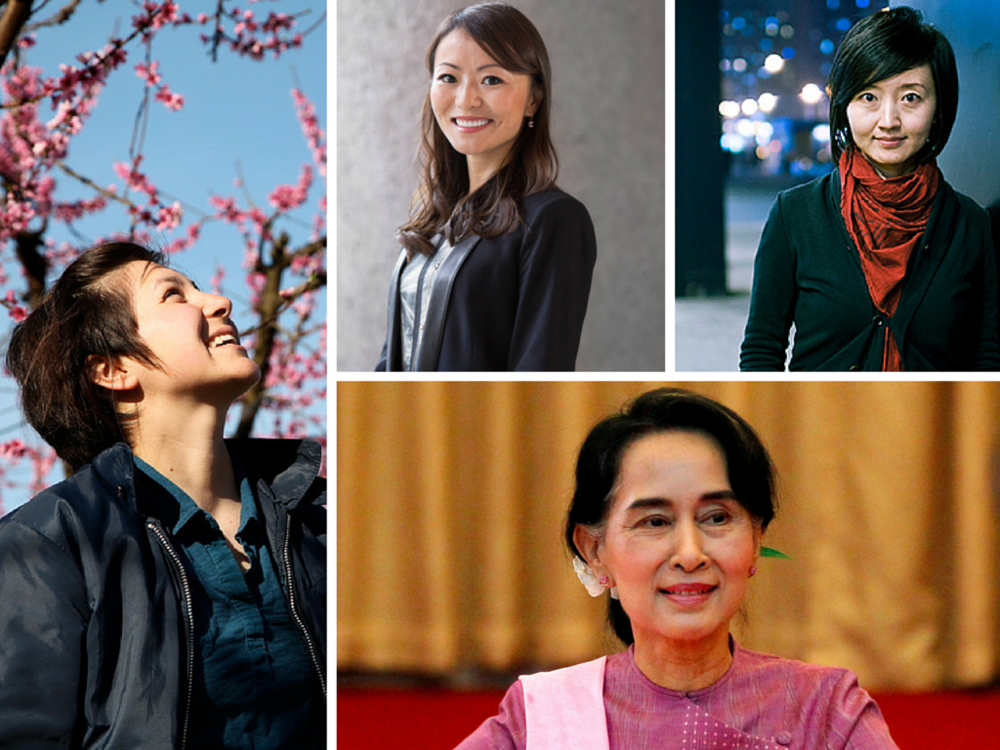 Every year, Fortune Magazine ranks the most powerful women alongside the famous Fortune 500. Though it’s a shame not to see any Asian businesswomen raising their voices in the U.S. or in the EMEA, it’s still refreshing to see a whole list of wonder-women of the Asia-Pacific.

However, there are other Fortune rankings with less business flair. Which of these formidable Asian ladies deserve more of our attention? We’re going to name just a few here.

It’s hard to believe Aung San Suu Kyi is already 70 years old and 25 years have passed since her Nobel Peace Prize. In fact, it’s harder to believe that she was a full-time housewife through her 20s and 30s. Suu Kyi used to live in cozy Oxford with her scholar husband and two boys. In 1988 she came to Myanmar (Burma) to nurse her mother and witnessed the 8888 Uprising. That was the beginning of her political career and two decades of on-and-off house arrest.

Last year’s landslide victory of Suu Kyi’s party in the national elections seemed to declare her the winner. The realpolitik, however, is different from the legendary fight against the ancien régime. The world is judging whether Suu Kyi is a great leader in peace as well as in war. She still has lots of work to do.

“Myanmar is about to complete a once-unthinkable transition to democracy after more than 50 years of military dictatorship. Aung San Suu Kyi, 70, won’t be the country’s new leader—at least not officially. But hers was the steady trickle of resistance that wore down the stone of Myanmar’s despotism over almost 30 years of opposition.

Suu Kyi, the daughter of one of the founding heroes of the country’s post–World War II independence movement, returned to Myanmar from exile in 1988 to oppose the junta that had taken power in the early 1960s. She co-founded the National League for Democracy and steadfastly renounced violence, even as the military subjected her to house arrest for nearly 20 years. Her personal sacrifice gradually rallied global opinion around her cause, the more so after she won a Nobel Peace Prize in 1991. Worn down by isolation and sanctions, the regime eventually agreed to allow free elections, which the NPD won in a landslide last November.

While rules imposed by the junta kept her from personally running for office, it was Suu Kyi’s nearly mythical reputation that rallied voters to her party. And she has made it clear that she will wield decisive behind-the-scenes authority (backing titular President Htin Kyaw, a friend and former aide) in the next, risky phase of the nation’s history.

Myanmar’s challenges include a struggling economy and violent conflict among its ethnic groups. But Suu Kyi has already demonstrated that her authenticity as a leader—her willingness to live the right message at any cost—can be a tremendous force for good.”

With her disarming smile and soft voice, Chai Jing doesn’t look like a warrior. She made war on the sky over her head nonetheless, with her self-funded documentary accusing the systematic problem of Beijing smog. What is her drive? Even the love of justice needs a personal motivation to be resilient. Jing’s motivation was for her baby daughter to breathe freely, and that appealed to Chinese parents all over.

Jing was famous from CCTV days for crossing the boundary between journalist and story material. When the Wenchuan earthquake struck in 2008 she stayed for days with the suffering family to report on the severe living condition firsthand. Turning news about the earth and sky into personal narratives is Jing’s strongest weapon so far.

“Smog is a daily phenomenon in every major Chinese city. But until former CCTV reporter Chai Jing released the powerful documentary Under the Dome last year on the causes of gray skies—failed government policies, feckless regulators, corruption—and their effects, including skyrocketing cancer rates, shorter life-spans, and childhood illnesses, China’s middle class had mostly taken it with a shrug.

Chai’s 104-minute documentary drew 200 million views online in a week before government censors took it down. It created a groundswell of concern and anger that continues today.”

For a layperson that dreads financial jargons as much as a dental visit, it’s not easy to grasp what exactly Fang does. She is basically a pharmacist of money, mixing and matching all the different financial ingredients (eg. stock, bond, currency) to create the perfect solution for each client.

Then imagine the added challenges of post-crisis banking and a ‘Wolf of Wall Street’ kind of bro culture. You just want to applaud her for making this far. Then another wow factor kicks in. She was a ballerina for 12 years. Ballet looks most elegant but requires every muscle to be tense and alert the whole time. She knows how to be tough, and tough as a woman, not ‘like a man’.

“At 17, Karen Fang hit a crossroads. Fluent in English (she won third place in a national speech competition), the China-born investment banker wanted to study overseas, but her parents would only let her go as far as Japan, where all she could say was hello and goodbye. That didn’t stop her. Fang completed a two-year Japanese language course in two months, and was enrolled in the highly ranked University of Tokyo by the next semester. She’s been on the fast road ever since.

Five years ago, she was poached from Goldman Sachs—where she made her name convincing a number of large pension funds to hedge in the run up to the financial crisis—by Bank of America to run a first of its kind on Wall Street cross-asset, cross-industry structured-strategies group (“It’s about solutions, not products,” she says). She has since grown her group to 55 from 10, and Risk magazine named B of A the top structured product house on Wall Street in 2015. Last year, Fang was also tapped by senior management to streamline the bank’s deal approval process. In April, she was named a Young Global Leader by the World Economic Forum.”

It’s easy to feel passionate about food, to follow the famous chefs, to check the locality of organic vegetables, or to plan the next holiday around a local menu. But how much do we know about the people who make the food in the first place?

Nikiko Masumoto transforms unknown and unheard farmers into individual, living characters. In her TEDx Talks, Masumoto talks about the origin of her family farm. After World War II her grandfather was released from an internment camp and founded their peach farm in California to set down roots in the land that once denied him and to feed its people. And her twitter bio (@nmasumoto) starts with ‘organic feminist farmer.’ Just like that, she became my favorite farmer.

“At least one good thing has come out of the California drought, according to farmer-artist-activist Masumoto: “It’s forcing the state to have big conversations about the future of water and climate change.” Masumoto, who works with her family at the Masumoto Family Farm, is an important voice in those conversations.

When she’s not working on the farm, the 29-year-old speaks at conferences and forums around the world, raising awareness about economic issues facing small, family farms, and encouraging broader discussions about climate change and labor policies in the agriculture world. She has also worked to educate grocers and consumers about the merits of small fruits, which require less water to grow than their larger counterparts.

The performance artist has also managed to carve out time for her artistic pursuits. “I couldn’t survive as a farmer without making space and time for my creative projects,” she says. “Most of my ideas come to me when I’m on the tractor.”