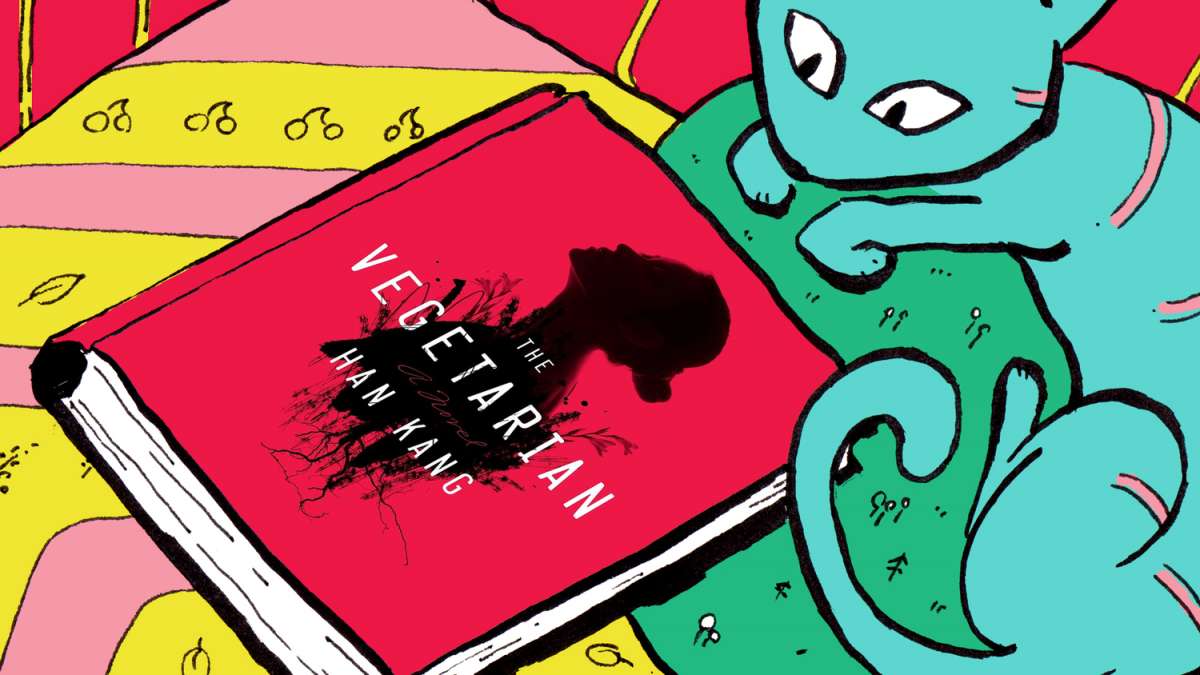 “It’s your body, you can treat it however you please. The only area where you’re free to do just as you like. And even that doesn’t turn out how you wanted.”

At the most basic level, The Vegetarian follows a woman who decides to give up eating meat and throws her marriage and family into chaos. At its core, Han Kang’s beautiful little novel is about taking control and stepping outside of the prescribed path of life, even if that requires stepping outside yourself.

Yeong-hye is the wife of Mr. Cheong, a chronic under-achiever who married her because she was perfectly ordinary and average. According to Mr. Cheong, the only thing that separates his wife from other women is her disdain for wearing bras. That is, of course, until he wakes up to find her discarding all the animal products in their house after suffering from a dream of blood and violence.

Yeong-hye’s seemingly simple decision to give up meat causes life as they know it to tilt off its axis: Mr. Cheong is embarrassed by his once ordinary wife and her parents react violently to the shame of having a daughter who will not feed her husband “properly.” As Yeong-hye’s vegetarianism evolves into something more complicated, she becomes the object of her brother-in-law’s obsession and causes her sister to wonder whether she would have had the courage to step so far out of the mold.

For such a short book, The Vegetarian attempts to look at quite a few themes: social and familial expectations, artistic inspiration, and the importance of having some control over your own destiny.

But what really stands out for me is the writing style itself. Deborah Smith did a fantastic job with the translation and beautifully captured the artistry of Kang’s descriptions. With a vague Murakami-esque essence, Kang’s writing has a surrealist and dreamlike quality. Yeong-hye is written almost like a mythical character and in the end I wouldn’t have been surprised if she actually did transform from a woman into a tree.

Rather than using a traditional chapter breakdown, the novel is divided into three parts, all of which are separated by different, unspecified periods of time. I think this was a very effective technique because it allows the reader to see the progression of Yeong-hye’s condition without creating a lull in the plot.

However, that doesn’t mean that all the parts are equal to each other. I personally thought the weakest part was the second section, which was narrated by “brother-in-law,” the husband of Yeong-hye’s older sister. While I can see how it was necessary to show the intermediate stage of Yeong-hye’s condition, I wasn’t so sure that the voice of her brother-in-law was the best for the job.

In contrast, I greatly preferred the final section, narrated by Yeong-hye’s sister. In that section, everything comes together really beautifully and I think we get the most interesting discussion about social expectations in Korean culture. While her sister has always been the responsible one, the daughter who did everything she was supposed to and supported everyone else, Yeong-hye has effectively stepped outside of those social constructs by deciding to take control over her own body.

In conclusion, this is a book I feel that I will need to reread again and again to discover all that Kang has hidden within its pages. Despite the novel’s short length, I cannot help but feel that I have barely scratched the surface of what it has to offer.

I would like to note that, despite its title, The Vegetarian isn’t really about vegetarianism or being a vegetarian in South Korea. I’ve seen many people jump to this conclusion and feel I have a duty to steer readers in the right direction. I would also warn those who are easily triggered by mentions of eating disorders, rape, or mental illness.

However, if you like strikingly beautiful literary fiction about what it means to take control of the self and are interested in works of masterful translation, I would highly recommend this novel.

About the Author: Han Kang

Han Kang was born in 1970 in Gwanju, South Korea, and was raised in Seoul. She studied Korean Literature at Yonsei University and made her literary debut with a series of poems in 1993. Kang now teaches creative writing at the Seoul Institute of the Arts in addition to her writing.

Since she began publishing fiction in 1994, Kang has won the Seoul Shinmun Spring Literary Contest, the Korean Novel award, the Korean Culture Ministry’s Today’s Young Artist Award, the YiSang Literary Award, and the Dongri Literary Award. Just this past spring, she received the Man Booker International Prize for her stunning novel The Vegetarian.