Why Ali Wong’s ‘Baby Cobra’ was so explosive 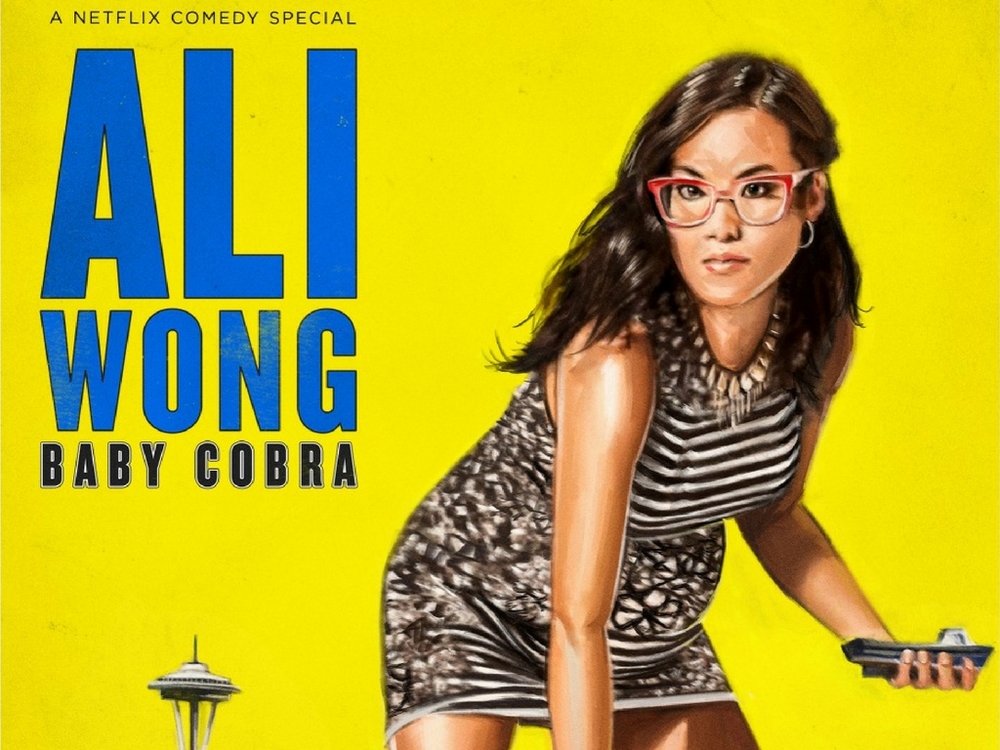 Since Ali Wong, a comedian and writer of Fresh Off the Boat, released her one-hour Netflix special ‘Baby Cobra’ last May, the responses have been spectacular.

“Ali Wong really puts her money where her mouth is, or maybe her vigour where her vagina is, because this woman is ON ONE.” (The Guardian)

Ali Wong’s ‘Baby Cobra’ is the most honest, rawest, funniest special I’ve seen in years. She has huge balls.” (Marc Maron of WTF)
Before this week, none of us had heard of Ali Wong. And now, frankly, we don’t know if we want to high-five her or mouth-pash her.” (Mama Mia)

The woman deserves all the credit. Ali took the most sensitive and ready-to-go-wrong topics like gender and race, and turned them into raw and sophisticated comedy for all sides.

1. Being pregnant is hilarious

“It’s very rare and unusual to see a female comic perform pregnant, because … female comics don’t get pregnant. Just try to think of one. I dare you. There’s none of them. Once they do get pregnant they generally disappear.”

Being a mom is already hard, and being a mom doing stand-up comedy was unthinkable before her.

This terror of losing a career was one of the reasons why Ali filmed the show seven months pregnant. In her recent interview with Elle she said, “I had so much anxiety about my stand-up career taking a big hit, so I wanted to use my pregnancy as a source of power and turn it into a weapon instead of a weakness.”

And it paid off. In another interview with Vogue she talks about the unknown benefit of pregnancy for comedians, “When you’re pregnant, you’re all gassy and you’re hungry, but then you’re nauseous. In past performances on late-night TV, I focused a lot on what I was going to wear and how I was going to look. For this special, I didn’t care about any of that. It was extremely liberating.”

While using her pregnancy as a weapon, she wields it to break another taboo; the miscarriage joke.

In a society that treats miscarriage as an unspeakable tragedy and yet less of an excuse to miss the work than the flu, we’ve been waiting to hear someone point out this irony openly in public. Ali also knew what she was doing. In the interview with Elle, she said, “The miscarriage joke, but it was important for me to leave it in. It’s a dark subject but something that happens to a lot of women, unfortunately. I’m proud that I was able to craft part of that experience into a joke, [and] I also wanted other women who have miscarried to know that I’ve had one too, and that they’re not alone—they’ll get through it.”

2. Asians are not all the same. And we make fun of each other.

“My husband’s half-Filipino half-Japanese, I’m half-Chinese and half-Vietnamese, and we spend a hundred percent of our time shitting on Korean people”

Have you ever felt that non-Asians are getting nicer to Asians just because they are afraid of China, and they don’t know the difference between Chinese and non-Chinese? For Europeans, anything East to Turkey would seem to be Asia. But just as Africa is not a country, Asians have complex dynamics within us, and, like, 50 different nationalities.

Ali, who is half-Chinese and half-Vietnamese herself, reaches the new frontier of the racial joke; Asian to Asian. She presents terms that many of us have never heard before but instantly understand: “fancy Asians” — Japanese and Chinese — and “jungle Asians” —Vietnamese and Filipinos. In the interview with NPR, she said, “Some of my Japanese American friends will see me going to town on a bowl of pigs’ feet and they’ll be like, “Oh my god, you jungle Asian.” It’s like, “We’re the same! I’m not supposed to feel bad about what I’m eating in front of you guys, but I do!” Because it’s different, you know?”

With all the love and understanding, yes, we know.

She also talks about Asian women who date white guys. Here’s the thing. When we condemn the white guys’ Asian fetish, it’s easy to forget that there’s another player in that relationship. What do Asian women think, other than a nagging doubt about whether the guy likes her or her Oriental-ness?

“You feel very picturesque when you’re with a white dude, you know. You feel like you’re in a Wes Anderson movie or something.”

We applaud her for initiating the conversation (and jokes) in which we all can jump in.

3. How to laugh at Feminism in a Feminist Way

“I don’t want to lean in, okay? I want to lie down. I want to lie the fuck down. I think feminism is the worst thing that ever happened to women—our job used to be no job. We had it so good!”

In the interview with Vogue, Ali said, “I’ve had one woman walk out because she couldn’t handle it when I said that I thought feminism was the worst thing to happen to women. That’s bound to occur, but if you stay till the end of the show, then you understand the irony in all of it. I do think that desire to not work anymore, even for women who are feminists, is real.”

For millennial women, the battle to earn the ‘right to work’ is almost over – though depending heavily on where you live. The fight is now to ‘make it work in work’ and to ‘reclaim the domestic bliss.’ I mean, it’s all good to ‘lean in’ and ‘break the glass ceiling’, but pushing and breaking all day long is tiring. Once you slow down the fight, there’s always some hard-core warrior seeing you as a submissive-third-world-doll ready to be enlightened. Then there are the trophy wives, who were supposed to have a ‘less’ fulfilling life, boasting healthier body and soul. Oh yes, Ali gets us.

We’ll see more of Ali Wong in coming years. And something tells me that she won’t disappoint us. A woman acting like she had trapped a man’s head between her thighs on stage while seven months pregnant? She can do anything.