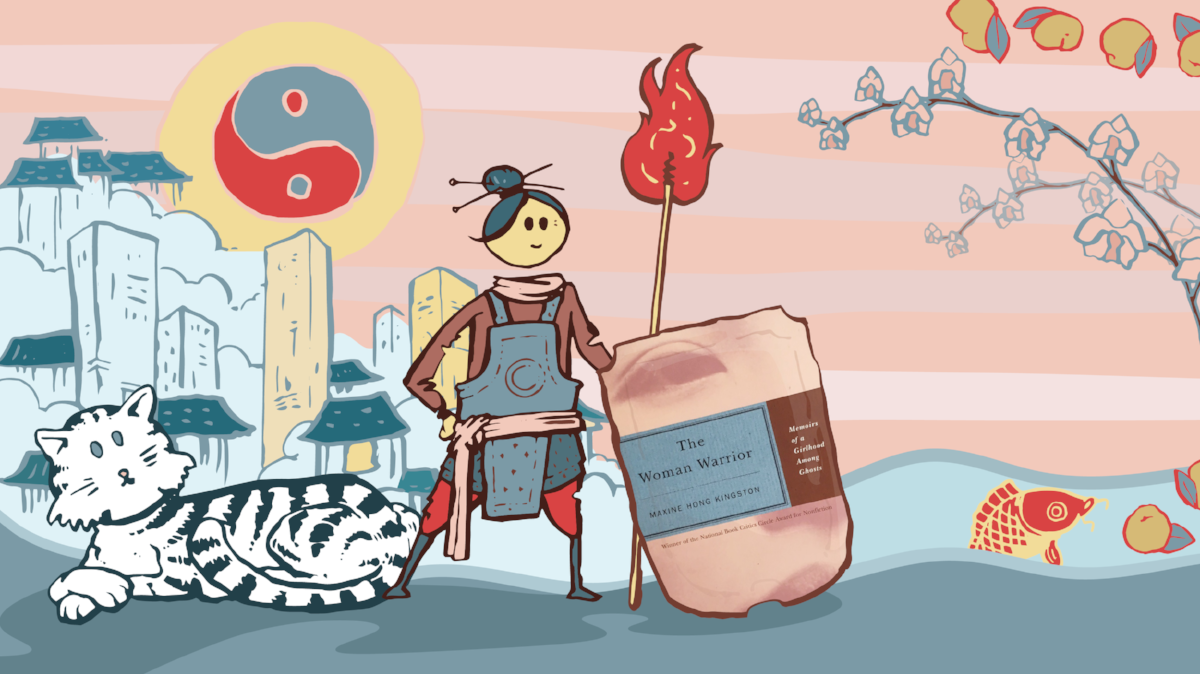 Maxine Hong Kingston is a giant within the Asian American literary community. She is known as a weaver of words with a unique ability to blend memoir with fiction and myth. Most importantly, she’s seen as one of the leading literary voices of Asian American women.

So how did she first get this reputation? By writing an enchanting mix of memoir and legend: The Woman Warrior.

The Woman Warrior draws heavily on Kingston’s own biography and focuses heavily on her relationship with her mother. In fact, the entire book is full of female relationships, the weak protected by the strong, as Kingston explores what exactly it means to be a Chinese American woman, torn between tradition and modernity.

Kingston captures the difficulty of this position flawlessly. Early in life, Kingston’s mother impressed on her the fact that, in China, having daughters was a very bad thing. Boys could work and fight, but girls were just more mouths to feed. Throughout the book we see that Kingston is never quite able to let go of her childhood fear that her parents will make good on their threat to sell her and her sister or marry them off as soon as convenient. Based on these same traditional values, Kingston is told over and over again that good Chinese girls are timid, speak when spoken to, and are skilled in running households. She can hope to be a servant or wife, nothing more.

And yet, her mother, the same woman teaching her these lessons, is the fiercest woman Kingston has ever known and a woman warrior in her own right. Kingston’s mother, Brave Orchid, was a doctor and traditional medicine woman in China, a strong spiritual presence who could chant souls back from the brink of nothingness. She doesn’t lose any of her fierceness in moving to the U.S. and even as she lectures her daughters on the merits of being “good Chinese girls,” Brave Orchid isn’t afraid to speak up and fight for her family like the legendary women of her own tales.

And what tales does she have to tell! Kingston’s prose flows effortlessly from memories of her mother’s perseverance into dream-like sequences of warrior women trained by monks to avenge their family’s honor. Particularly in the sequence entitled “White Tigers,” we get to see Kingston’s mastery of language in the way memory and myth bleed into each other. It is a technique that many authors attempt and few pull off so well. As Kingston herself says:

“Night after night my mother would talk-story until we fell asleep. I couldn’t tell where the stories left off and the dreams began, her voice the voice of the heroines in my sleep.”

This is the only way to accurately describe the power of Kingston’s prose: in her own words.

Ultimately, in The Woman Warrior, Kingston has created a striking portrait of what it means to be Chinese American woman and the dualities of that identity: the damsel and the warrior, old world values and Western social expectations. And despite how much the memoir is grounded in the times and locations of Kingston’s memories, it is still a greatly accessible book. Although my own experience differs from Kingston’s by several generations and a mixed-race marriage, I was surprised to read whole passages that felt as though they had been lifted directly from my own life. I recognized those family dynamics, the confusion surrounding traditions that are never completely explained, the opinionated matriarch who ruled the family with a stubborn will and fierce protectiveness.

The Woman Warrior was a landmark book for an entire generation of Chinese American women, who might have never before seen their own experience reflected back at them so accurately and beautifully. In my own generation, Maxine Hong Kingston is revered as a groundbreaker and yet is sometimes more admired than actually read. It is my hope that through this review, a younger generation of Asian women will discover the wonders of Kingston’s writing and pick up a novel that might inspire them to embrace their own inner woman warrior.

About the Author: Maxine Hong Kingston

About the Author: Maxine Hong Kingston is the third child of Chinese immigrants and was the first child born in the U.S. Kingston is most well known for her ability to blend fiction and memoir while exploring her cultural heritage as a Chinese American. She has written a number of highly celebrated works of creative non-fiction and one novel. For The Woman Warrior, Kingston was awarded the 1976 National Book Critics Award. She is currently a lecturer in Creative Writing at the University of California, Berkeley.