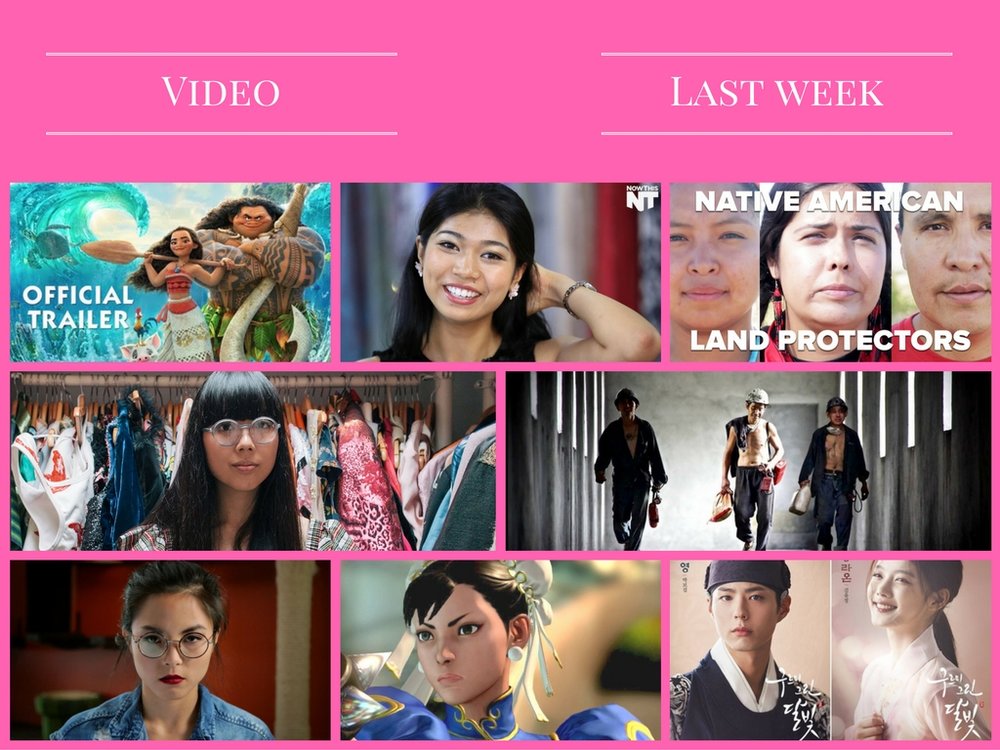 Ever since swallowing Pixar with its liberal flavor, and after years of criticism for promoting Barbie-lookalikes on screen, Disney has really been trying to embrace diversity and girl power. There was The Princess and The Frog, Brave, Frozen, and now Moana. It won’t satisfy everyone, but we love it already.

2. We Are Land Protectors, Not Protesters

Buzzfeed is now 10 years old in a business world that congratulates each other for surviving the first year. Once the equivalent of ‘cat videos’ and a mirror of dying traditional journalism, Buzzfeed now shows the voice of Native Americans protecting the land from a North Dakota pipeline. As Buzzfeed starts to act its age, it may show the glimpse of future journalism in the internet era.

Ms. Mojo, one of our favorite YouTube destination, chose strong female game characters and, of course, it includes Chun-Li. With nostalgic reboots of Pokemon and Mario, it’s heartwarming to see our favorite Street Fighter. We, however, hope to see more of awesome Asian female characters – preferably talking roles in decent clothes – in the future.

YouTube star Anna Akana presents, with her usual wit and kitschy visuals, how to drop hints to your boyfriend for a proposal. As she said in the video, it’s totally fine for the girl to propose, duh. But don’t we all know how we want to make the decision for ourselves on our own terms, and then let the guy do the romantic ceremony.

April Magazine has praised Susie Bubble for her inimitable style, and now she’s been visited by British Vogue. In fact, among all the fashion bloggers in the world, hers could be the wardrobe we want to see first. And it doesn’t disappoint. Even if you’re not interested in the fashion world, sweet Susie will guide you to her wonderland.

Priyanka Yoshikawa, a half-Indian and half-Japanese woman was chosen as Miss World Japan 2016. Last year’s Ariana Miyamoto was also multiracial, with an African-American father and a Japanese mother. What seems to be a positive shift to outsiders provoked a sort of identity crisis in Japan. But how Priyanka faces all this hatred with dignity and inner strength. Isn’t that what we want to see in Miss World?

For many women and men in the world, the South Korean drama is a dose of guilty pleasure. It’s the video version of a too sweet or too heavy desert, and we secretly love it.Moonlight Drawn by Clouds, a historical romance currently rating at number one in Korea, is a recent example.

101 East of Al Jazeera English is one of the most consistent and in-depth programs about Asia made by a non-Asian broadcasting network. This time presenter Steve Chao talks about China’s economic slowdown and potential aftermath, not just with statistics and numbers, but with the voices of actual people.