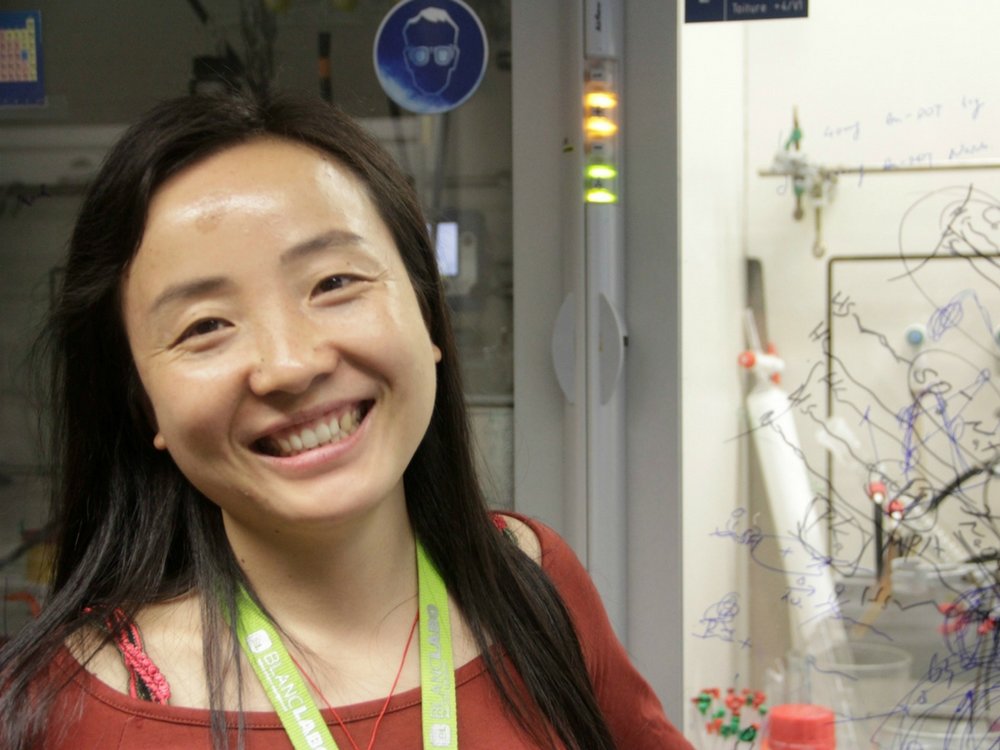 Science and Nature talk about gender equality in science, and even the EU has made a work program to promote gender equality in research. We see badass female scientists and mathematicians in films like the Imitation Game and the upcoming Hidden Figures. Nerdy girls can find role models in picture books.

It wasn’t like this several years ago. Numerous women have been dedicating their energy and passion to the sciences for ages, but even recently, the only female scientist we could casually name was Marie Curie. Marie Curie, the only person in the world to win the Nobel Prize in Physics AND Chemistry. The bar was that high to be recognized.

Huayan Yang is one of these passionate and dedicated women scientists. Huayan finished her Master’s and PhD in Xiamen University, China, for inorganic chemistry. She now does research at the Supramolecular Nanomaterials and Interfaces Laboratory (“SuNMIL”) in Ecole Polytechnique Fédérale de Lausanne (“EPFL”). The most prestigious federal institute of technology in French-speaking Switzerland, EPFL was recently ranked the second-best continental European universities – surpassed only by ETH Zürich – by London-based education company Quacquarelli Symonds.

And Huayan is the only Asian woman in her lab.

April: When was the moment you decided to be a Chemist?

Huayan: It was not me who chose chemistry, chemistry chose me. It wasn’t my first choice major! Even after my bachelor’s degree, I wasn’t sure, I simply didn’t find an interesting enough job, so I pursued a further degree at a better university, Xiamen.

It was a hard job. I did long hours of research during the week, and the experimental results only came in on the weekends. Somehow my weekend mornings became the most exciting part of the week. My work was, and remains, the structure of nanoclusters and nanoparticles, and on screen they seemed so beautiful. Then I realized that this was what I had wanted as a little child. I had always liked beautiful things and wanted to be a fashion designer, but my parents disagreed. Now, on screen, I saw beauty every day.

Some people think this level of fundamental research is not useful, but I think ‘beautiful’ is its own kind of ‘useful’. Like art. Chemistry is beautiful, too, and when I synthesize a new compound, this is something new. Something no human has synthesized and measured their crystal structures before and I can name the new structures however I want. I realized, “Ok, I can be remembered for this. Yes, maybe not be applied in industry, but beautiful.”

After your PhD and some post-doc research in China, you came here, to EPFL, in Switzerland. What is the biggest difference you feel as the scientist between a Chinese university and a European university?

In China, to succeed as a science professor, your life becomes boring. You don’t have weekends, you’re in the lab day and night. Some PhD students even become suicidal because of the high pressure, and some young professors die because of overwork. They sacrifice everything just to work in the lab. Here, in Europe, science is just another kind of work. When a scientist leaves the lab at the end of the day, they can leave the work behind and enjoy their life.

Also, in the whole Europe, everything is shared – information and equipment, which is important for science. The only problem is that this equipment is not freely available. Since it should be overseen by special technicians who only work on daytime, we cannot use it on weekends or at nights! The governments and universities care about their scientists’ health, but for someone who cannot stop experiments once they’re started, it is a bit inconvenient.

In China, equipment is always occupied and people take shifts to use them. Overall, in chemistry, I think scientists are more productive in China and Chinese scientists are becoming more and more successful in the field compared to 10 years ago.

You see more and more Chinese names in the prestigious scientific publications. In many labs in the U.S.more than half of the students are now Chinese. On the other hand, when Chinese students go to Europe or the U.S. for their PhD, they get used to a relaxed lifestyle and sometimes change their major.

You mentioned nanoparticles. Could you explain that a bit more?

Nanoparticles are very, very small – on the scale of 0.000 000 001 to 0.000 000 100 metres. When the size of matter becomes that small, the particles will show special properties. So we try to control and change the size and shape of particles to change various properties. Now we can use nanotechnology to change the color of cars, for example.

My research is actually about gold nanoparticles. Well, we can chemically controlthose nanoparticles in very precise ways and change its colour. From yellow to black, any color will be possible. But I cannot make gold from other elements. Some guys want to, but that’s beyond chemistry.

Another large area of research in nanoparticles is carbon, which is a very common and plentiful element. Most things in the world are made from carbon, and it is very light. Chemists are working hard to make different kinds of carbon materials these days, far beyond just diamonds and graphite.

Do you have any other female Asian scientist you admire?

There is one to name. Nieng Yan. She is a molecular biologist and became a professor at Tsinghua University in Beijing before the age of 30. When she came back from the U.S. to China, you could see her in the news everywhere in the whole country. She is so young, beautiful, and does great research. Publishing in Science would be a dream to many scientists and she publishes in Science and Nature almost every year! From her blog, you can see her personality and she’s beautiful, feminine and I think very lovely.

On the other hand, she’s almost 40, but still single. I want to see a female scientist who is super successful but also has a happy family. In China, I haven’t seen a good example of that yet.

Is this true only in China? Or do you see the same problem here too?

I don’t know much about the situation in Europe. As a scientist in China, you don’t have too much time to take care of your family and a lot of Chinese men want their wife to spend more time with the family. For this reason, women who can’t compromise their careers aren’t so popular with ordinary men. Maybe I should accept that there are so many female scientists who excel in the research and that’s all that matters. But I think the world hasn’t treated them very well.

Do you think your hard work also affected your relationship and your marriage plans?

Yes it did. I was in an eight-year relationship from my undergraduate years. During our Master and PhD we worked in the same lab, but on different projects. I always had to work very hard, even on weekends, and we only had mealtimes together. I was ok with this, but he wanted to have more fun outside the lab. We fought because of this and eventually broke up. I think that if I hadn’t worked too much at the lab, we would have gotten married.

After that, it was difficult finding a new relationship. I wasn’t that young anymore and I got good results at work. This made it even harder! Men would say, “Ok, you did better research than me, it will be a big pressure.”

In the first year, it was very difficult, but it made me realize that relationships between men and women are also quite complicated. Before, I had only focused on work. For life choices, I had relied on him. When I broke up with my ex, I started to do everything for myself. I’ve changed a lot, and it’s been the best thing I have done in my life. I go to the gym, I try things I haven’t tried before, and everyone I know thinks I’ve become more beautiful since then.

What’s your next step?

Honestly? I have much passion for my research, and I work hard to get good results. I want to feel safe and independent, and science work keeps me confident about myself. But I want to also enjoy life and look forward to finding a relationship and have a married life.