Raising a child the traditional Korean way in suburban America 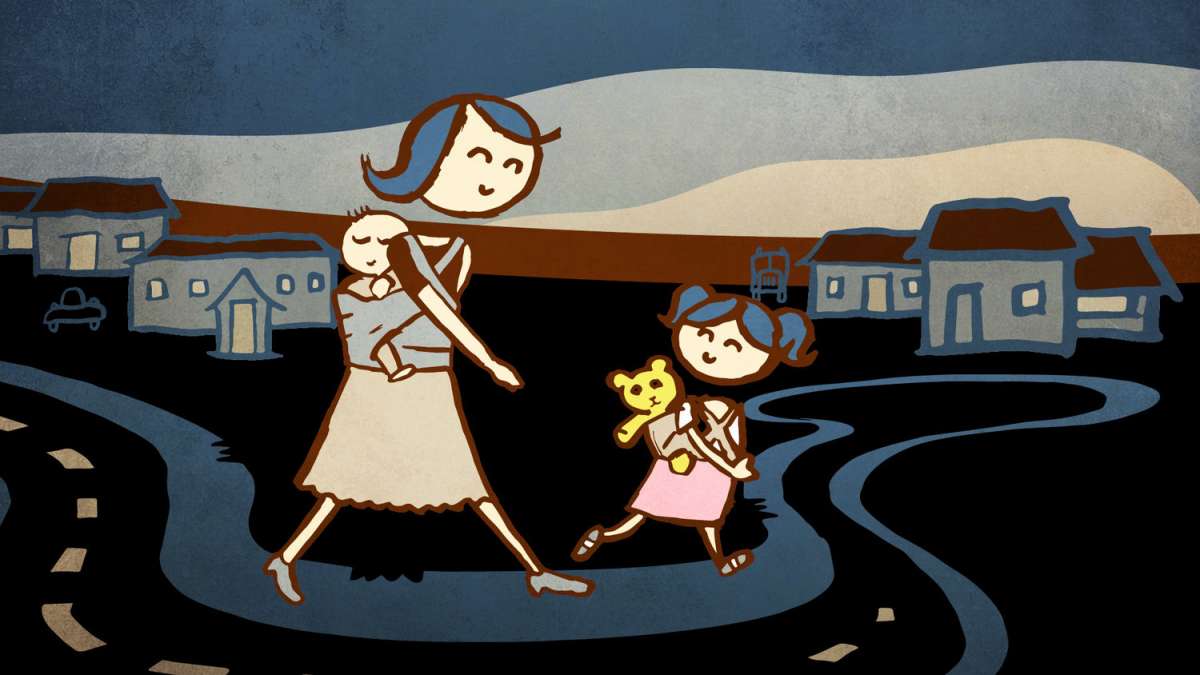 It’s 9 o’clock at night on a hot summer night, and the street is quiet … except for the sounds of footsteps shuffling. They belong to me and my two-year-old daughter, who is walking alongside me while holding a small flashlight to illuminate the ground beneath her small feet. Wrapped around her chest with a long piece of fabric is a baby doll, who she is constantly cooing. My daughter looks up and smiles as she meets the eyes of her little sister, also wrapped up in a piece of fabric and attached to my back. We are all bopping along silently in the dead of the night (well, dead of the evening, perhaps) while other houses’ windows show tv lights flickering and shades are closing to prepare for sleep … 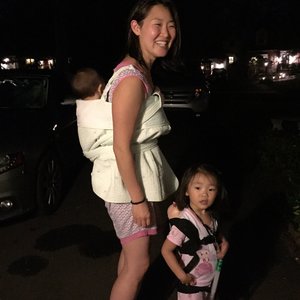 author and her children (Photo: courtesy of Sandy Lee)

I live on a dead end street in suburban Philadelphia where most houses contain couples who work full-time jobs and young kids who spend their days in daycare or preschool – most of these kids don’t make a peep on the street after seven o’clock as parents make sure the kids dutifully enter their bedrooms, receive their goodnight kisses, and close their eyes until the next morning. Then the parents break open a bottle of wine, relax in front of the tv, crack open that new bestseller …

Nobody else on the block walks their kids to sleep wrapped up in a long piece of fabric. And even if they did, I’m not sure they would admit it to anyone else – I mean, isn’t this the weirdest thing that they ever saw?! Those funny Asian people and their funny Asian ways!

Except that it wasn’t the weirdest thing when I was raised. I remember going to sleep wrapped up in a podaegi (a Korean-style carrier with two straps attached to a long piece of fabric) on my mom’s back on hot summer nights while she chatted with other tired moms who were walking the neighborhood and waiting for overworking husbands to come home. I remember looking up at the stars, leaning into the warmth of my mother’s neck and feeling my breath warm my face while the rhythm of her walking made me drowsy. And when my mom was busy, it was my grandma, grandpa, an uncle, or the next door auntie who carried me on their backs and swayed until I eventually slumbered.

Replicating this peaceful way of sleeping has been one of my goals for raising my kids – it’s one of the several traditional methods of parenting that I strive to keep as a Korean mother. But therein lies the issue – while my childhood was stereotypical of those raised in Seoul in the early 80s, is it possible to still practice those parenting methods in suburban America, especially in my town where we are pretty much the only Asians? Does the neighborhood know we have no cribs because my kids and I all lay on one flat mat as I did growing up? Do they think we can’t afford strollers because my babies are always being carried on my back? Will they think my kids are straight out of the Jungle Book because they fling their shoes inside every time they enter an indoor space? 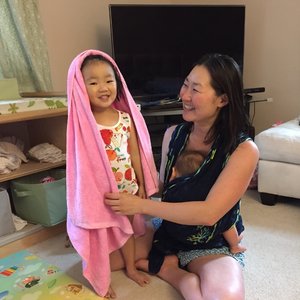 author and her children at home (Photo: courtesy of Sandy Lee)

One of the things that I did learn quickly as a mother is that no matter how I parent, someone will always offer some criticism (in Korea, that person is usually the mother-in-law; here, it seems to be anyone who has ever raised kids or has never raised kids). I often get suggested that I try the newest sleep training method to help my kids sleep more “normally,” or to make my kids walk more because they need to learn to be independent. Some of these suggestions do make me question not only my way of parenting, but my mother’s and my grandmother’s – after all, didn’t they raise kids the way I’m trying to raise mine and if I’m wrong, so weren’t they..? Should I be second guessing everything from the way I transport my kids, the way I put them to bed, how I feed them, how they are dressed… in fact, are they just too Asian for this modern day American neighborhood?!

Fortunately, my mother quelled some of these fears in me when my second child was born – she reminded me that mothering is a rather instinctive habit, and that the way she raised me was not only based on what she saw my grandmother and other Korean mothers were doing but also on what felt right in her gut; she felt better with her babies sleeping on either side of her and travelling around a bustling city like Seoul with babies securely attached to a part of her body. And no, it wasn’t because she couldn’t afford a crib (which was still fairly a new idea in the 80s) or a “baby carriage,” but that she didn’t feel like she could adopt those new fashionable Western ideas of parenting without feeling a knot in her stomach. So as children, we were carried to sleep and laid down right next to her or another adult family member and we were all happier for it. And so I thought until I started raising kids here.

The fact is, there is no way to know if my decision to raise my kids in the more traditional Korean way is “correct” or not because I don’t have a crystal ball to tell me whether my kids will turn out happier for it. Perhaps they would rather prefer a crib and to be riding in the newfangled stroller. But until they can articulate those choices (and even then, I’m not sure I’ll listen, frankly, as it’s just so convenient to put the baby on my back and go about my merry way), I will have to trust that the way my mother and so many Korean mothers raised children for millennia offers my children the sort of comfort and security that I myself enjoyed in childhood, albeit its strangeness in the environment I currently reside.