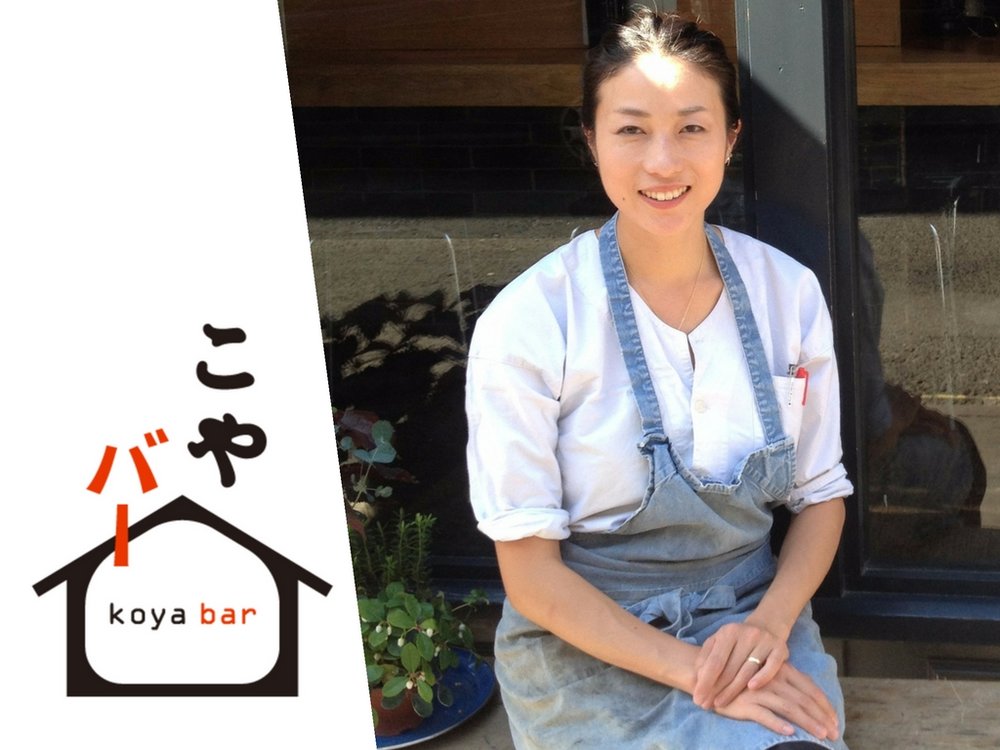 Koya Bar stands quietly in the middle of Soho, London, set among cool alleyways full of cafes, restaurants, gay bars, and creative production companies. Despite minimal advertising and a low-key appearance, with only a little red shed-shaped sign (Koya means a shed in Japanese) in front, Koya Bar is extremely popular. Through word of mouth, customers discover Koya Bar and keep coming back (I am one of them). Its atmosphere is serene and down to earth, the complete opposite of narcissism and cravings for the limelight. I met Shuko Oda, head chef and part-owner, who also gives an impression of genuine sincerity and honesty. She is a modern version of a food shokunin (craftsman, artisan in Japanese).

In search of becoming a udon specialist

April (Chiaki Mackie): Tell us about your life up until you started with Koya Bar. You were an original founder of Koya, a predecessor of Koya Bar.

Shuko: Yes, in 2010 together with John Devitt and Junya Yamasaki we opened Koya with two head chefs: Junya and myself. When Koya Bar opened next door we divided our roles. Junya remained in Koya and was fully in charge there while I moved to Koya Bar as head chef to create slightly different atmosphere. When Junya had to return to Japan last year, we decided to close Koya for the time being and concentrate on Koya Bar.

April: I heard that John initiated the concept of Koya, being inspired by authentic Sanuki udon (thick white flour noodles originated in the small village of Sanuki on Shikoku island in Japan) he ate in Paris.

Shuko: Precisely! John went to eat at a long-established udon-ya (a restaurant specialised in udon) Kunitoraya in Paris. That was a sort of lightbulb moment for John and he thought to himself, ‘This is it! I’m going to open a udon-ya in London!’. Junya and I were friends and we totally agreed with John’s idea and that was the start of Koya.

One of the first things to do was to work in Kunitoraya for three months during summer myself. I trained as a chef there and learnt a lot, while Junya went to Shikoku in search of authentic foods and tastes. After our training and research, we got together with clearer ideas.

April: Was a desire to eat something authentic in London a motive for setting up Koya?

Shuko: Yes, that as well. A true motivation behind it was that there were still only a handful of authentic Japanese restaurants in London which we felt pleased with. We found that most Japanese restaurants served multiple dishes rather than specialising in a particular food. They would serve ramen, udon, sushi, gyoza, well everything.

April: They also serve other Asian foods such as Thai food, Vietnamese, and others.

Shuko: That’s right. We wanted to be a specialist of one particular food; to master one thing.

April: Have you been in the food industry before Koya?

Shuko: We the founders had different careers. I had a part-time job in the kitchen as a student and two years experience in the kitchen after graduation. Apart from that, I was always in the fashion industry. Junya was in the film/magazine industry in Japan. After arriving in the UK, he became a café manager. John was a stockbroker in the city.

Although we all had some experience as chefs and in the food industry to a certain degree this was the first time that we concentrated on running a food business to this extent.

April: A complete change of careers! How did you find the transition?

Shuko: I personally found it quite easy to get used to as I already had experience working in the kitchen and I knew how it worked. Recruiting staff, as we were not seeking a senior position such as head chef, wasn’t too hard. In fact, when I employ staff, previous kitchen experience is not the top priority. The most important quality is the person’s enthusiasm, willingness to learn and passion for food. Their vision is important and we need to share the same value and ethos. At times, previous kitchen experience can be counter-productive.

Previous kitchen experience is not so important

April: I see. Staff in the kitchen in Koya Bar are mostly non-Japanese, is that right?

Shuko: I’m the only Japanese person working in the kitchen. There is some Japanese waiting staff.

Shuko: Some were. Some wanted to use Japanese ingredients, some shared the same vision, some loved our taste. Different background, different experience. There is a young man who started as a dishwasher then became a food preparation assistant and eventually worked his way up to become a tempura chef.

April: Working his way up, step by step. As you mentioned, it’s quite hard to find Japanese restaurants in London which are authentic. I must admit I often get disappointed. A Japanese person’s taste buds for our own food is so finely tuned that it can tell a very subtle difference in dashi (soup stock). How do you think non-Japanese staff can tell the differences? How can they recreate the authentic taste which you want to achieve? For example, I just had onsen-tamago (poached egg in chilled dashi), which is a unique Japanese dish, and the delicate and subtle flavour of dashi is absolutely vital. But it’s so subtle that my British husband would pour soy sauce all over and spoil it.

Shuko: Yes, a combination of poached egg served in cold dashi is something hard to accept for most British people with conventional taste. My husband is also British in his 40s and not a great fan of onsen-tamago, so he doesn’t eat it. However young people in their 20’s and 30’s, they are very flexible. They have eaten similar dishes and easily accept different foods. They don’t have that barrier anymore. Customers’ taste buds have changed, too. If it was 10 years ago, Koya Bar wouldn’t be as successful as it is now. Today anybody who is interested in Japanese food knows the word ‘dashi’. I think people’s interest in food has expanded.

Also because it’s in London. Outside London, it’s a different story. People’s taste buds are not as attuned.

April: Maybe the area matters as well? Can you tell us about the clientele you have around here?

Shuko: Many of our regulars work in the film, media or production companies. Also, some are tourists, local residents – various. Mostly non-Japanese customers. On the whole, the number of Japanese people is decreasing in London. Having said that, we have some Japanese regulars, including a Japanese businessman from Singapore who comes to London regularly and always comes here for Japanese breakfast.

Shuko: Yes, the main concept of Koya Bar is just an udon-ya serving authentic udon noodle and dashi soup, which are freshly prepared each day. Another vital concept is to use locally produced foods. Since we serve breakfast in England, ‘why don’t we serve English breakfast with a little twist? If we serve porridge, why don’t we serve kedgeree, too, then?’

April: All ingredients are locally produced?

Shuko: Yes, except katsuobushi (bonito flakes), soy sauce, dried seaweed and shiitake to make dashi stock. Recently a Spanish manufacturer started to produce bonito flakes but we still import katsuobushi from the same manufacturer in Japan. If we use different katsuobushi it may affect the overall taste. That would make me feel somehow betray our long-lasting customers. For this reason, we stick to the same manufacturers from Japan for vital ingredients. Apart from that, we try to use locally produced ingredients including a few from France.

April: Your noodles are freshly prepared using the traditional ashi-kone (kneading by foot). Do you have a factory?

Shuko: Not a big scale factory but yes, we have another premise to prepare udon each day.

April: Udon is your speciality with a seasonal touch. The unique combination of hot/cold noodles and soup with authentic flavours is something one would only expect in Japan. Are your customers’ reactions as you expected?

Shuko: Yes, our customers like what we serve. We also do day’s specials where we serve slightly different dishes such as mooli and kombu matsumaezuke, for example. We want to serve some unique dishes, which only Japanese customers find palatable and very simple home cooked dishes as well. Also, some textures which non-Japanese find hard to accept. One example is something sticky as in natto. We dare to serve these ‘challenging’ dishes on purpose, as there is no point of making only popular dishes such as deep fried dishes. We like making something different from others.

April: It must be fun to see the customers’ reactions!

Shuko: Moreover I cook what I want to eat.

April: I was talking with your staff, a young lady from Japan on a working holiday and she said she LOVES the makanai here.

Shuko: Yes, I had the same experience when I was working in Kunitoraya. The makanai there was that staff can eat anything they liked from the menu. I was so happy about it and wanted to do the same for our staff. Young men with a big appetite can eat a big portion!

April: Wow. They are so lucky!! I want to work here, too.

Shuko: Yes, I missed makanai during my maternity leave so often came here for it.

April: You have just come back from your maternity leave. Is it your first child?

Shuko: Yes, my first child who is now 8 months old. I returned to work two months ago and work full time on weekdays.

April: What are your next steps?

Shuko: We are considering opening Koya Bar 2 next year, possibly later this year. We haven’t decided on the location yet, but probably somewhere a bit different.

Then we would be able to offer better positions to the present staff. The present premises is small, so there are limits. With more space, there are more possibilities such as making miso ourselves. And possibly selling merchandise. We used to sell an original T-shirt which we used to wear as our uniform in Koya. This apron over a white cotton shirt is our current uniform.

April: I’ve noticed. This is a cool apron. I would like to buy it myself.

Shuko: Thank you. Maybe, but I’m not selling this one! The price is likely to be quite high as it is specially dyed in Kyoto. We also get asked about the teapot. It will be such fun to sell our original merchandise.

April: Lastly I have one more question. I nearly passed through Koya Bar. Only the small sign shaped like koya (shed) above the entrance, is there a special reason?

Shuko: Not really. We regard ourselves as simply a udon-ya, thus no need for a big advertisement. All we want to do is to make delicious foods and serve customers everyday.

(This interview is condensed and edited)

Shuko and Koya Bar fit so naturally into London, while firmly keeping a Japanese authenticity. This is somewhat new and characteristic to this generation. This bar sits as well in London as it would in Japan.

Chiaki is a Japanese nutritionist living in the southeast of England with her husband. She enjoys a morning routine of brisk walking or running in the countryside followed by a healthy breakfast.