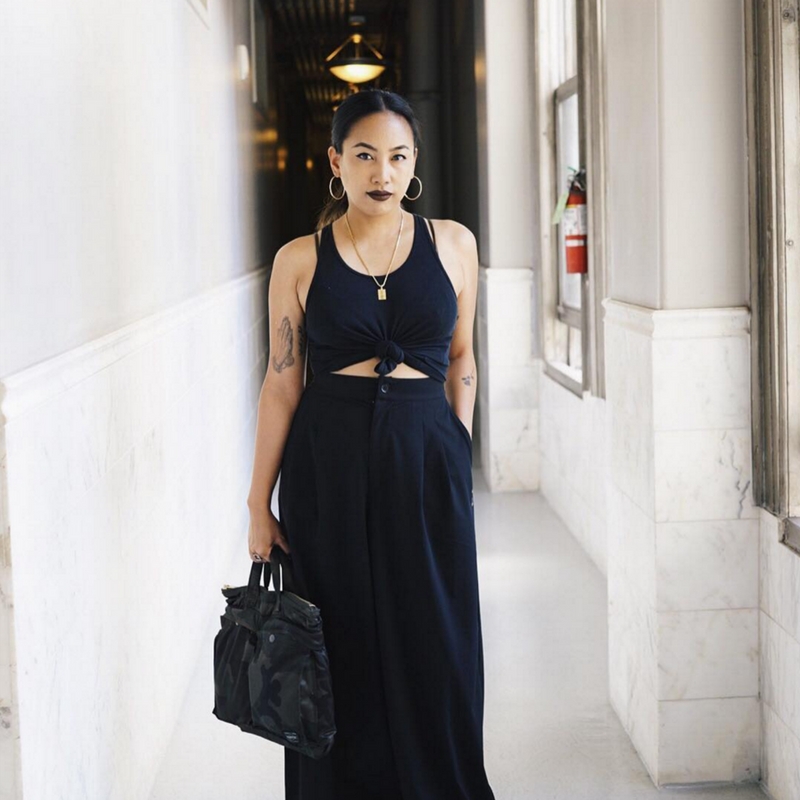 One summer, maybe seven or eight years ago, a new streetwear shop opened just a short drive away from my house. The shop was completely outside of the norm of my hometown in south-central Alaska. At the time, my older cousin was visiting home from her art school in southern California. She was friends with the owner of the shop and we’d spend some of our days just hanging out there. Every now and then she would let me in on some of the new things she’d found. One of those things was, or what I thought was just a simple graphic t-shirt.

We walked towards a display and she handed me one of the folded shirts, “It’s Hellz Bellz.”

“Hell’s Bells?” The name threw me off a bit.

I look back and can’t help but laugh at how insignificant I thought that shirt was. I would come to learn that Hellz Bellz, or more popularly stylized as HLZBLZ, is a big freaking deal. And, the woman behind this groundbreaking brand is an innovator not just for women’s street fashion, but the entire culture altogether.

Lanie Alabanza-Barcena, or Miss Lawn, got her start in New York City at Triple 5 Soul, the street clothing line, and moved onto Jay-Z’s Rocawear Juniors in 2004. It was at Rocawear that she would work her way up the ranks from a graphic designer to an art director. She has said in the past that, while at Rocawear, her designs were often seen as too outrageous and would never sell. But it was with those off-the-wall designs that she would breakthrough with Hellz Bellz in 2005 and interrupt the male-dominated streetwear market.

Hellz Bellz helped to give a whole new meaning to the term “statement piece.” At a time when graphic t-shirts were considered just a small aspect of an outfit, here came this brand putting the graphic at the center. This idea disrupted the usual standards of streetwear. While Hellz Bellz may not have been the only brand doing this, it was undeniably one of the shining trailblazers of the trend and the only one with Miss Lawn’s name and mind behind it.

In between her days at Rocawear, Miss Lawn would print her designs on t-shirts and began to build the foundations of her brand. She happened to wear one of her shirts to a meeting at Rocawear with founder, Jay Z, in attendance. After the meeting, Miss Lawn handed a packaged t-shirt to Jay Z who would then pass it to Beyoncé. Beyoncé was spotted and photographed wearing Miss Lawn’s t-shirt and the rest was history.

In some way, Hellz Bellz can also be seen as a testament to the kind of woman Miss Lawn is. She is a person who doesn’t just think outside of the box; she lives miles and miles away from it.

Miss Lawn has always maintained that her designs were and are mainly for her – or for girls like her – who weren’t into the conventional, ultra-cutesy clothing found at every shop. This genuine, heartfelt quality about Hellz Bellz is maybe why it resonates beyond just streetwear.

There’s a lifestyle, an entire world, full of women who break the mold and empower themselves through the way they come out of every obstacle.

They’re outspoken and independent. They express themselves through their work, their craft, their clothing, their entire demeanor. They bulldoze through the barriers people create for them. They create what they don’t have and build when other people choose to settle.

Ten years on, Hellz Bellz is a landmark brand that continues to grow. Miss Lawn, along with her husband, Bam, and her team, still pushes beyond fashion’s conventions. Today, HLZBLZ is seen as one of the ground-breaking brands of streetwear and Miss Lawn as a true pioneer.