Best TV and film to watch in October 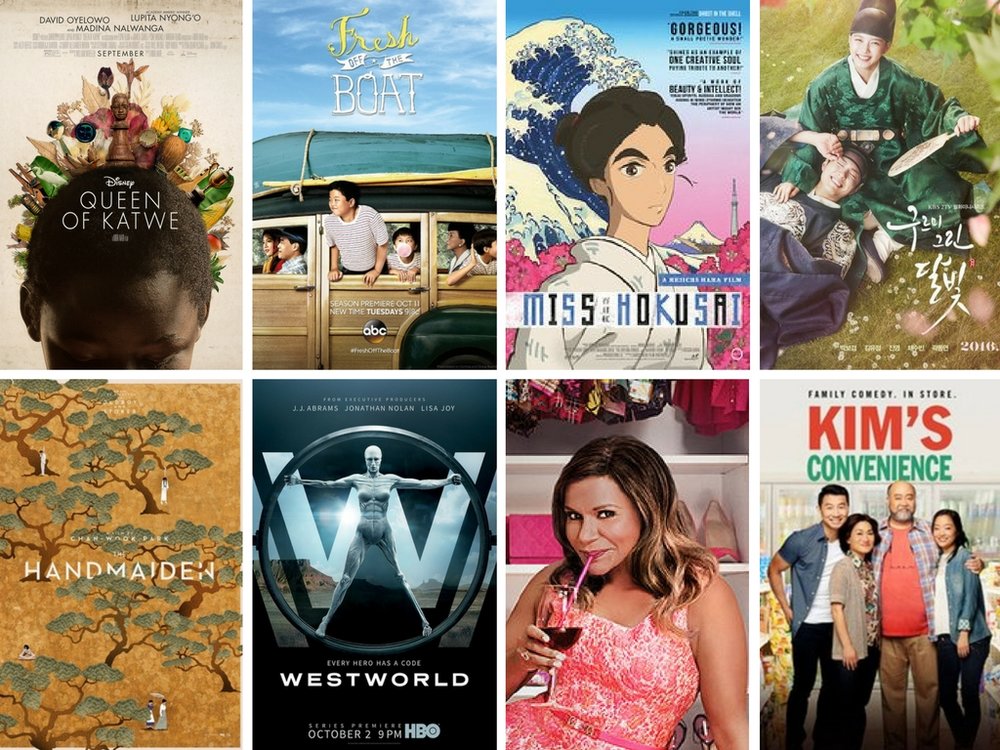 Here we go, ladies. The sweaters and scarves are out and the trees are turning into golden yellow or vibrant red. This only means one thing – fall has officially arrived. Let’s bid farewell to the blockbuster summer movie season and TV series as we move forward into the fresh new picks for October.

Disney’s latest film starring Lupita Nyong’o, Queen of Katwe chronicles the true tale of Phiona Mutesi, a young girl selling corn from the slums of Katwe in Uganda as she overcomes challenges to becoming a Chess Olympiad champion.

We’ve seen a bunch of Disney sports-themed movies about athletes that are physically talented. For a change, it’s refreshing to watch an inspiring film that honors a smart young woman at the top of her game.

Miss Hokusai is an animated, coming of age film about the life of Oei, the daughter of Japan’s famed artistic legend Katsushika Hokusai (think The Great Wave off Kanagawa). It is both intriguing and amusing to pay homage to Katsushika Hokusai’s famous masterpieces through the eyes of his daughter and follow her exploits as she struggles to step out of her famous father’s shadow to find her own place in 19th century Japan’s highly male-dominated setting.

Based on Hinako Sugiura’s historical manga, this film adaptation directed by Keiichi Hara is a visual feast for Japanese anime and classic 2D animation fans.

One of the biggest surprises and buzz-worthy films at this year’s Cannes Film Festival, The Handmaiden has been released to 175 countries; making it the most widely distributed Korean film of all time.

A gender bender period drama about a prince falling in love with a girl disguised as a male love guru, Moonlight Drawn by Clouds is South Korea’s latest TV drama sensation. The plot thickens when she became a eunuch for the royal courts in the 19th century Joseon dynasty and becomes entangled in the political turmoil of sorts. A case of mistaken identities resulting in unmistakable love, this light-hearted romantic comedy will surely melt your heart and will have you rooting for love to save the day.

It is already brewing up to be one of the most promising new dramas, and after watching the much talked about pilot, we guarantee that you will be looking forward to the next episode with anticipation.

The theme park’s attraction: Wealthy visitors get to interact with humanlike androids (called “Hosts”) programmed to behave as cowboys, gunslingers, and courtesans. These patrons can live out their most violent and lustful fantasies inside this make-believe world without any consequences or retaliation from the Hosts.

The twist: What if the Hosts are capable of doing, and feeling more than what they are initially programmed for?

Welcome to Westworld, HBO’s extravagant, sci-fi thriller based on the 1973 movie by Michael Crichton (writer/director). It has a stellar cast too, led by Anthony Hopkins, Ed Harris, and Evan Rachel Wood. As Winter, or rather the series end is coming for Game of Thrones, HBO is betting on Westworld to be the network’s next big hit.

An Asian-American version of Bridget Jones, Dr. Mindy Lahiri (Mindy Kaling) is a successful OB/GYN working in New York. She’s smashing all stereotypes of South Asian women often portrayed in TVs and movies – conservative, dutiful, and timid. In this romantic comedy, Mindy’s character is quirky, a tad narcissistic, shows no interest in religion or tradition, and is obsessed with romantic movies and finding her soul mate. Underneath her superficial character is a likable person trying to get her life together in her quest for self-improvement.

Catch The Mindy Project’s return for Season 5 on Hulu.

Exciting news for Sex and the City fans. Sarah Jessica Parker is back for an all-new HBO dark comedy series and she (well, her character Frances) is filing for divorce. Taking a hard look at a decade-long marriage gone bad might not seem like a laughing matter, but Divorce manages to provide just the right amount of balance between humor and painful reality.

Wait, there’s more. This is the American TV debut for writer Sharon Horgan, whose brilliant writing has brought us British comedy hits Catastrophe and Pulling.

9. Fresh Off the Boat

Disclaimer: Not all Asian-Americans are piano prodigies and Math geeks. For some, like the young Eddie Huang, are obsessed with hip-hop, basketball and all things American.

Loosely based on the memoirs of chef and food personality Eddie Huang, Fresh Off the Boat focuses on Huang’s childhood experiences growing up with his two younger brothers and Taiwanese-born parents. Smart, warm, and funny, it’s a 21st-century immigrant story that tackles the complexities of assimilation in America.

Fresh off the Boat returns for its third season where the Huang family will visit Taiwan, their homeland.

Kim’s Convenience is officially open for business and is all set to make its comic debut in Canada’s CBC Television.

This hilarious sitcom follows the life of the Kims, a Korean-Canadian family who operates a convenience store in Toronto. Mr. and Mrs. Kim immigrated to Toronto in the 80’s while their children, who are now young adults, were born in Canada. It’s a timely show about cross-generational and cultural family conflict amid the backdrop of the most multi-culturally diverse city in the world.