Best TV and film to watch in November 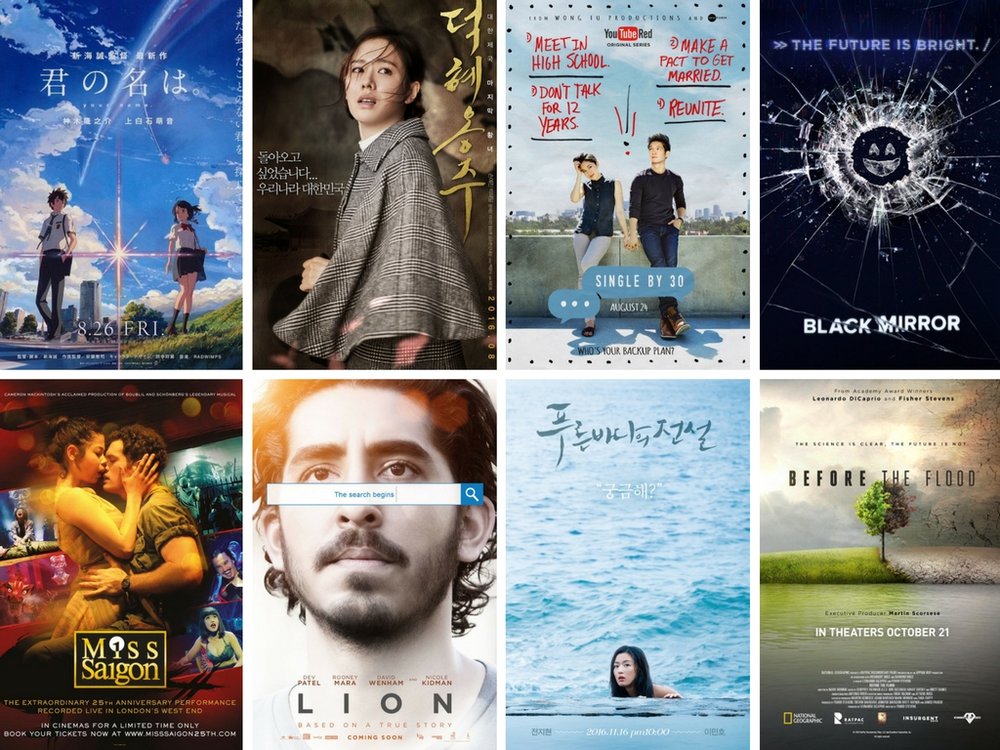 Be thankful. Be very thankful. November is not just for post-Halloween, pre-Christmas frolicking. This month also marks a smorgasbord of new and exciting films and TV shows. In between the holiday season, we carefully selected a list of quality shows to keep you entertained over the break. Scroll down, enjoy and we’ll see you in December.

An endearing romance-fantasy animation about two teenagers has taken over Japan’s box office as the country’s highest grossing film of 2016. Director Makoto Shinkai wonderfully combined intricate animation with a bizarre gender-swapping storyline centered on a country girl and a city boy drawn together in their dreams, sprinkled with the elements of star-crossed (literally, by a comet) lovers.

The hype is much deserved. Your Name‘s universal appeal has captured the hearts and imagination of a wider audience other than the youth and anime fans. It’s one of those rare movies that will charm and captivate you.

The tragic life of Princess Deokhye, the last princess of the Korean Empire who was forced to move to colonial Japan at the age of 13, is chronicled in this touching film starring Son Ye-jin. With the help of a childhood friend, the princess made several desperate attempts to return to Korea in the hopes of uplifting a desolate nation at a time of war.

Like what any good drama does, The Last Princess hits you right where it hurts, the yearning of going home. Its heartfelt scenes of longing, resolution, and redemption will definitely make your eyes a little misty.

Lion is the amazing true story of Saroo Brierley, who at 5 years of age got lost and was separated from his impoverished family in his rural Indian town before finally being adopted by an Australian couple. Some 25 years later, Saroo is introduced to a new technology called Google Earth. Armed with this technology and a few hazy recollections from his childhood memories, he retraced his path and is miraculously reunited with his lost family.

The true story already earned international attention, especially in India and Australia, when Saroo finally revisited his hometown. Given this biopic’s solid cast featuring Dev Patel, Nicole Kidman, and Rooney Mara, plus a remarkable life story, it’s no surprise that Lion has roared its way onto some major awards shortlists.

The heat is on in Saigon and in cinemas for a limited time only for this legendary musical about the passionate love story between an American marine and a young Vietnamese bar girl during the final days of the Vietnam War. You may like the songs or you may sense all the politically wrong elements, but there’s no denying its longstanding fame and solid provision of career for Asian musical talents.

To commemorate Miss Saigon’s 25th Anniversary, a sold-out gala performance was staged at London’s Prince Edward Theatre, and it was recorded live for filmed production. Emotional close-up moments and artistically framed choreography are brought into focus using high definition cameras from different angles. To top it all off, the film includes an emotional finale that features the current cast as they are joined on stage by original cast members Jonathan Pryce and Lea Salonga.

The grim, haunting techno-paranoia anthology series Black Mirror was first aired in UK’s Channel 4 five years ago. This fall the British cult hit show makes its mainstream leap to Netflix with six new episodes. The plot and characters are different for each episode, but each one builds on a common perspective: a cynical preview of how humanity could/would evolve in our tech-obsessed world.

Black Mirror is creator Charlie Brooker’s modern take on the Twilight Zone, but much more intimate and intellectually disturbing. It unflinchingly highlights the darker side of something very close to our daily lives – technology. Each episode’s satirical yet realistic approach about our not-too-distant-future delivers one key thought-provoking message. It’s not technology but rather a person’s unhealthy and excessive use and abuse of such tools that may lead to their own ultimate doom.

All eyes will be watching as two of Korea’s brightest stars, Lee Min-ho (Boys Over Flowers) and Jun Ji-hyun (My Sassy Girl), are set to make their small screen comeback this November. For the first time, Lee will be playing dual roles in SBS’ promising new fantasy/romance drama. The Asian heartthrob travels across time as a nobleman in the Joseon era and as a con-man in modern day Seoul. Jun will portray a mysterious mermaid in search of her lost love. The story, which was adapted from a classic Joseon legend, is written by Park Ji-Eun (My Love from the Stars).

Back in high school, best friends Peter and Joanna both agreed that 30 was “too old” to be single and alone. So they made a fallback pact to marry each other if they are still single by that age. Life goes on and fast forward to the present, now 30-year old Peter and 29-year old Joanna see each other again and they both happen to still be very much unattached.

Set in ethnically-diverse Los Angeles, Single by 30’s colorful cast is led by two Asian-Americans actors, Glee‘s Harry Shum Jr. and YouTube musician Kina Grannis. This eight-episode series from YouTube filmmakers Wong Fu Productions is for anyone in the mood for a feel-good romantic comedy.

It’s not an easy topic to watch, the concept itself is depressing. The most critical threat of our time, climate change, is highlighted in this monumental documentary by National Geographic. Directed by Fisher Stevens and hosted by environmental advocate Leonardo DiCaprio, the duo made a significant three-year journey around the globe to witness firsthand the catastrophic effects of climate change. In this 90-minute narrative, Leo assembles leading experts and some of the world’s influential figures like President Barack Obama and Pope Francis to educate and hopefully inspire action to save our dying planet.