Miranda Cuckson: embracing the world with violin and viola 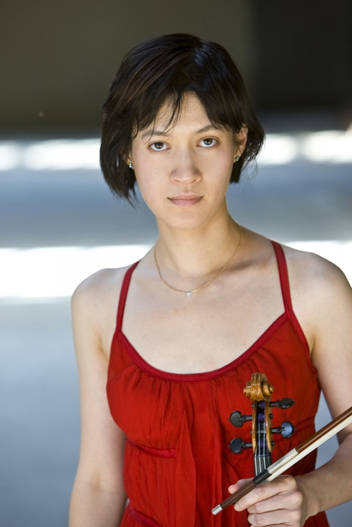 Miranda Cuckson is not one to wallow in a comfort zone. Three years after her very first violin recital, eight-year-old Miranda was playing for the most discerning of audiences: the auditioning panel at Juilliard, New York’s bastion of the arts. From tinkering with a hand-me-down violin, she’s gone to performing in the world’s most prestigious concert halls, continuing to cultivate a formidable reputation as a contemporary-music interpreter and performer. More than anything else, though, even more than an irrepressible drive to learn and excel, Miranda is most interested in simply exploring every facet of her craft.

While she has been lauded as a solo revelation, her approach to creating music is rooted in its universality. An Australian-born American with splashes of Taiwanese, Austrian and English heritage, Miranda credits her diverse background with having instilled the belief that understanding and communication are always possible. “It has given me a continual interest in putting myself in others’ shoes,” she says, “That attitude has carried over into what I do: with each piece, I endeavor to put myself in the shoes of the composer, irrespective of background or musical language.”

Shouldering the responsibility of a solo performance is thrilling, but Miranda also relishes contributing as part of an ensemble. “I enjoy the dialogue of playing with other musicians, reacting to each other, the spur-of-the-moment interplay.” She draws parallels with life itself, saying that as much as we need to be alone, we also learn about ourselves through existing in a group. “It teaches a lot: how to have a discussion, how to embrace differences, how to cooperate in an agreed-upon structure.”

These days she’s diversifying within the string family, exploring the viola for “an even broader palette of sounds” and expanding an already impressive repertoire. While she agrees that there’s an open inclusivity about contemporary music, Miranda says that it’s just as important to recognize and respect each other’s differences. “Artists are often in the vanguard of that kind of understanding and exchange because we deal with personal and universal experience, and communicating that with others.”