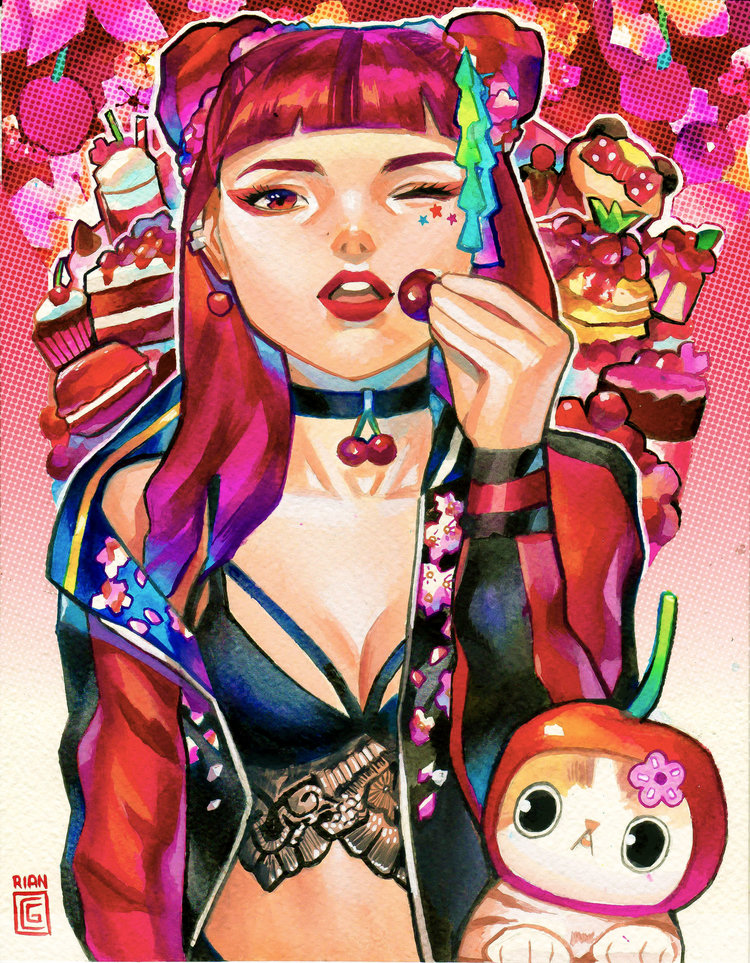 What caught my attention, however, was the additional re-launch of Betty & Veronica, the spin-off. Betty and Veronica started as the typical love interests of Archie and got developed as very different and equally interesting characters that learn to deal with high school and adolescence themselves. This project involved various artists as well, both renowned and independent, from all over the world to create cover arts. Rian Gonzales was one of them.

Rian, a Santo Tomas University graduate with a Bachelor’s Degree in Fine Arts, is one of the most prominent comic book artists in the Philippines. Now came the time for her to get her due recognition abroad.

April (Danielle): The comic book industry is known to have a mostly male audience, with only a small percentage of women. Do you see this changing over the years?

April: Do you think women are more interested in women-centric comic books?

Rian: I guess they work as a springboard. Before, women – audience and creators – usually didn’t know where to start because they felt out of place. Now, let’s say Batgirl and Miss Marvel, they help you to find interest in comics.

April: Now that you’re getting onto the international scene, do you think your work reflects your Asian heritage?

Rian: The most prominent theme in my work is the Japanese manga or anime style. That’s what really drew me in from the start, such as Card Captor Sakura or Sailor Moon. Only in college did I start to try different styles because my professors advised me not to draw anime-style artwork. They thought it strips you of individual style.

April: What other influences did you have, then?

Rian: The college helped me a lot of with anatomy. It gives you a better idea of the characters, as in Western comic art with more muscular shapes. There was also the Disney style, but manga style still had more appeal to me.

April: How do you see your work evolving over the years?

Rian: When I draw for myself, I just draw what I like. Like with the Candy Girls series. It was a personal project, sort of my retreat from being burnt out from work. I see my drawings evolve when I work for others, by trying other forms – men, backgrounds.

April: But Candy Girls is my favorite of your work! Then, who do you mean by ‘others’?

Rian: Ever since college, I’ve posted my drawings on DeviantArt. Individual clients have asked me for small-time works, some wanted their characters drawn and some authors wanted concept arts for their novels.

April: What kind of criticisms have you received from your past clients?

Rian: I’ve never really had problems with clients because they already knew my work before commissioning me. The harshest comment I got was from a fellow artist, a Filipino. I think it’s nice being critiqued, but it’s time to stop listening when the comments get personal.

April: Do your emotions tend to reflect on your work?

Rian: I think it’s normal, but when I’m feeling down, it doesn’t show on my work because I barely post it. It’s like social media pushing people to only highlight their triumphs, so the others don’t see the frustrating side.

April: What triggers you to draw or create anything at all aside from having to complete an order?

Rian: When I open Instagram, I see a lot of artists doing great work. That’s the most amazing part about the internet; you can get inspiration just by looking at your phone. Otherwise, I watch animations like from Studio Ghibli and Pixar. It takes away your stress or gets you to laugh.

April: Could you recommend other awesome artists?

Rian: Very recently, I liked works of Mingjue Helen Chen, Kevin Wada. Like Marguerite Sauvage, they redesign stuff to be more applicable to contemporary times. I was happy when Red Sonja stopped wearing a bikini, and when Vampirella got redesign. Her former costume was the most impractical of all time.

April: What do you think of Asian comic book artistry influencing the Western world?

Rian: I’m happy that now there are more Asian artists who have regular work with Marvel and DC, like Annie Wu, Stacey Lee, and Mingjue Chen among many. They influenced these big companies to consider different styles, like Jim Lee making a new house style. It’s becoming normal that there are Asians in the mainstream comic book industry.

April: It’s good that Marvel and DC have Asian artists, but they also have big markets in Asia. That’s not exactly the case for Archie Comics. I thought it’s interesting for Archie Comics to tap a Filipino artist.

Rian: I guess it was great timing. When they re-launched their covers was the time I got really into drawing for comics.

April: What was it like working with Archie Comics?

Rian: It’s really surreal. They are an American company, so their email came around 2 AM here. I was a bit groggy, and had to read it so many times before it sunk in.

Out of all the comics, Archie was the one that was there during my childhood. That’s the nice thing about Archie, you can see yourself in a day in the life of Archie, as a relatable teen, not a super hero. So I was thrilled when it turned out to be my first mainstream gig.

April: How was the process?

Rian: I read the rebooted series because I liked Fiona Staples’ work, made the fan art, and tagged Fiona. She noticed and commented on it. At that point, I was happy enough. Then they contacted me!

But in the beginning, they said that nothing was certain yet about Betty & Veronica. It was just an idea. I waited about 5 months before they decided to ask me for a cover.

April: Those five months must have been excruciating!

Rian: Yeah! And they told me not to tell anyone!

April: Do you plan to do more work for Archie Comics?

Rian: With Archie Comics, none at the moment. I’m working on a different comic book for a different company. It’s a bit female-centric, quite exciting. It’s coming soon.

April: Can you tell us more about it?

April: So far, which one of your work represents you most?

Rian: I guess it’s the Candy Girls series. I like punk street fashion mixed with Lisa Frank type candy colors and a bit of Kyary Pamyu Pamyu style. You can be cute and edgy at the same time. That’s what I do with drawing women. I want them to have an attitude, not just being sexy. Among Candy Girls, the most recent one, Cherry Red, is my favorite.

April: I noticed a cute cat in the Candy Girls series. Is it your sort of signature?

Rian: Yeah, a cute cat next to a bad-ass character, it balances out, makes the scene light and comedic. As Wonder Woman drawn in her signature poses and usual wardrobe, my style is to make superheroes look more down-to-earth. I like to show the mundane things in their lives, like Harley Quinn in a skater outfit.

April: What is your goal as an artist?

Rian: Right now, I want to have a regular cover run for a comic book series. Like Kevin Wada who did a series of covers for Catwoman.
April: What would be your advice for a budding comic book artist and fan who wants to be like you?

Rian: You should make your online presence felt. Everything is there – expand your visual library, look for references, and you can get contacts just by posting your work.

It’s also important to have a peer group, where you’re comfortable to share your work in progress to get the comments on what works and what doesn’t. Then, go to events like comic cons. I’ve met writers and artists just by going to conventions. Artists tend to be introverts, right? They warm up to you when they find out you have a common ground.

Also, Jake Parker said: Finish what you started. If you’re obsessed with perfecting your work, you will never finish it because you are your worst critic. So, just draw and post it.

Looking at this girl – who used to doodle at the back of her classroom – sipping her mocha latte and waiting for her turn to demonstrate her art at the InkFest at Ayala Museum, I couldn’t help but imagine the rest of the independent female artists all over the world. Soon, more Asian women artists will rise and rise and be the stars.