Best TV and film to watch in December 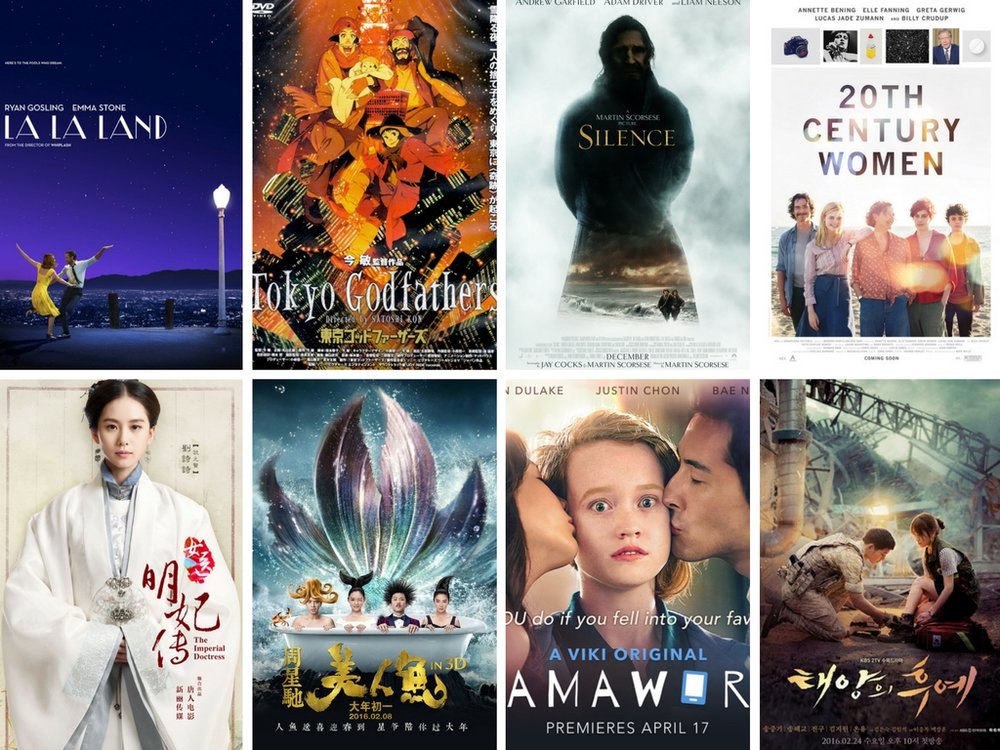 What films and TV shows are likely to be remembered long after 2016 ends? We’ve made our list and checked it twice. Get ready to find out this month’s recommended shows, which aren’t really naughty, but are absolutely nice.

A front-runner for the 2017 Oscar Best Picture race, La La Land is a delightfully exquisite, musical extravaganza about two Hollywood dreamers who fall in love in the tinsel town Los Angeles. Featuring outstanding performances by Emma Stone as aspiring actress Mia and Ryan Gosling as jazz musician Sebastian, the spectacle is written and directed by Damien Chazelle (the same genius behind Oscar-winning Whiplash).

There will be enchanting melodies. There will be John Legend. There will even be dancing on car roofs with the right amount of jazz. La La Land promises to deliver an immensely captivating production guaranteed to send you home with a spring in your step and a contagious smile across your face.

The Mermaid made a huge splash in China as the country’s highest-grossing film – not this month, not this year, but ever. Hong Kong comedy icon Stephen Chow (Kung Fu Hustle, Shaolin Soccer) directs this romantic comedy fantasy delivered with a powerful environmental message. A mermaid clan fights back to stop a greedy property developer Li Xuan (Chao Deng) from destroying their ocean habitat. The beautiful mermaid Shan (Lin Yun) is tasked to seduce and assassinate Xuan, but ends up falling in love with him.

You don’t need to belong to any cultural or ethnic background to enjoy this hilarious Chinese comedy. And underneath the laughter and hysteria lie a sense of purpose – a plea for ecological awareness and protection. With the nation’s overwhelming pollution woes, the underlying storyline is a much-needed breath of fresh air.

One chilly Christmas eve in Tokyo, three homeless people accidentally stumbles upon a newborn baby while rummaging through the trash in search of food. The misfit trio made up of middle-aged drunkard Gin, aging drag queen Hana, and teenage runaway Miyuki goes through the chaotic streets of Shinjuku in the hopes of reuniting the baby with her parents. Adapted from the best-selling novel Three Godfathers by Peter B. Kyne, the comedy-drama anime is directed by Satoshi Kon.

Tokyo Godfathers is, at heart, a genuine Christmas movie about family, friendship, redemption, and the goodness within us even when confronted with the direst of circumstances.

There’s a saying, “It takes a village to raise a child”. Or in this film’s case, three 20th Century Women.

Veteran actress Annette Bening, in one of her finest Oscar-worthy performances, plays Dorothea, a bohemian single mother raising her teenage son in Santa Barbara, California during the tumultuous late 70’s. As a mother determined to make a good man out of a boy, Dorothea seeks the aid of two equally compelling female characters – Abbie (Greta Gerwig), a punk photographer in her 20s and Julie (Elle Fanning), a liberated neighbor in her teens.

The comedy-drama, which is based on writer-director Mike Mills’ teenage life, is aptly described as “poignant love letter to the people who raise us – and the times that form us”.

Some may say, any movie directed by the great Martin Scorsese should be on your must-watch list. Silence, the master director’s passion project that he’s been trying to make for more than 20 years, will finally hit the big screen by the end of this year.

The long awaited film is an adaptation of Japanese novelist Shusaku Endo’s classic novel about two Portuguese missionaries who travel to Japan to spread Christianity during the 17th century. As Christianity was illegal in Japan during that time, Christians were driven underground or otherwise run the risk of brutal persecution and torture.

Step into the crazy land of Dramaworld, the first of its kind Korean-American mash-up series. Claire Duncan (Liv Hewson) is an American college student who is obsessed with Korean dramas (a.k.a. K-Drama). Her boring life suddenly becomes melodramatic when she is magically transported to her favorite K-Drama “Taste of Love”.

The 10-episode web drama will take romantics and K-drama fans on an enjoyable journey from Los Angeles to Seoul. They too will be able to live through Claire’s eyes as she navigates and stars into her very own telenovela. Surprise cameo appearance from Korean celebrities will add to the exciting line up of cast that includes Sean Dulake, Justin Chon, and Bae Noo-ri.

A bright, caring, and earnest young woman rises above the male-dominated world in ancient China to become a well known imperial doctor during the Ming Dynasty. She is the legendary Tan Yunxian (Cecilia Liu), and her inspiring true story is chronicled in the popular Chinese TV series The Imperial Doctress. In a distant culture where women had an unavoidably low social status and were downright considered inferior to men, Tan Yunxian dauntlessly beat the odds by secretly learning the art of traditional medicine despite her father’s strict objection.

The rich storyline is even made livelier by the show’s intricate costumes and visually stunning set. This is a historical drama that is both pleasing to the eyes and comforting for the soul.

“Watching Korean dramas could be dangerous, and may even lead to legal troubles.” This was the official statement released by China’s Ministry of Public Security after this South-Korean top rated drama became a phenomenal hit in China this year. Back home, some conservative political leaders praised the military-themed storyline for promoting patriotism and South Korean culture.

Descendants of the Sun tells us the story of a peacekeeping forces captain (Song Joong Ki) and a volunteer surgeon (Song Hye Kyo) falling in love amid the fictional war-torn country Uruk. Any self-respecting K-drama fan will agree that it has all the elements of a K-Drama classic: ridiculously good-looking and heroic characters, exotic location (Greece), and an irresistibly engrossing plot peppered with sweeping romantic gestures. So why don’t we revisit this beloved modern classic to wrap this year?