Chinie Diaz: Always look on the bright side of life 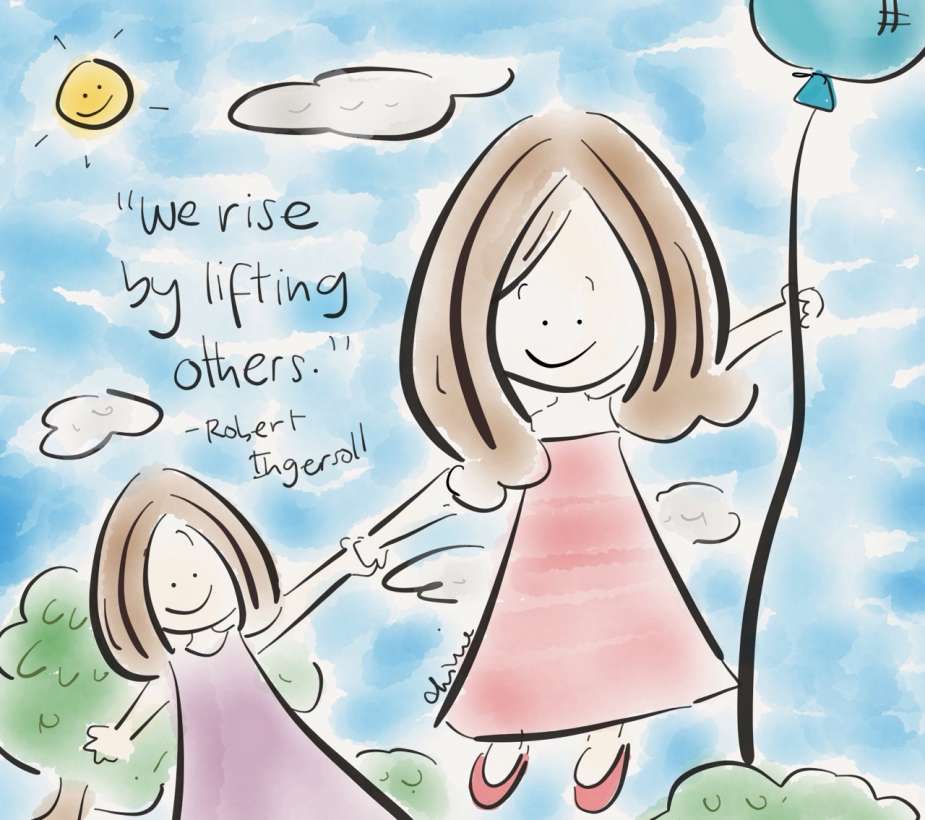 There are many inevitabilities of life, but what isn’t so predictable is how we navigate through them. The internet gives us lists to follow like “30 Things to do Before You’re 30” and “Everyone’s Bucket List Should Have These 5 Things.” Except, what’s wrong with this approach is we’re often left comparing ourselves to one another rather than reevaluating what we can do for ourselves. Sometimes, we need a little kick in our heels (or a hug) to get us started.

Chinie Diaz is the just cup of positivity, paired with a daily random reminder, that we all need. A cancer survivor and former teacher, Chinie knows the hardships of life but likes to look at the up side. I had the chance to get to know Chinie, how she stays creative, and what inspires her to create her simple yet inspirational illustration series Fab After 40.

Q. Tell us about yourself and how Fab After 40 started. Where were you in your life?

A. I started Fab After 40 in 2012, a couple of years after I turned 40. In fact, I didn’t even know I could draw until that game “Draw Something” came along recently. Then I discovered that I could draw – Not very well, just doodling, but still! Gasp! Who knew?! – and I loved the concept of the illustrated narrative. I also felt the need for an outlet to deal with the whole AGING thing, which felt more disturbing than delightful, so I needed to find ways to make it more delightful.

Q. Where do you – no pun intended – draw most of your inspiration from?

A. I really actively look for quotes on Tumblr and Pinterest, mostly, that are positive and uplifting. When I find something that resonates with me or answers something I myself am feeling that day, then I draw it. For the most part, I think the world as reported by the news and seen on the internet can get pretty negative and depressing, so I like to try and shine some light from my own little corner of the web. 😉

Q. What are your goals for Fab After 40 and who do you draw for?

A. Initially, my blog was really supposed to be this whole “Woohoo! Age is just a number! We rock!” type thing for fortysomething women like myself. But as I went along, I started getting messages and comments from all sorts of people – tweens, teens, twenty-to-thirty-somethings, gay men, senior citizens – asking me for advice and/or thanking me for cheering them up when they needed it. It was pretty awesome, so that’s how I’d like to continue.

Q. What do you do to stay creative?

A. To be honest, my drawings take about 5 minutes each to make, so there’s a lot of time left for other pursuits. I read a lot, and write. I’m actually primarily a writer — or at least I used to be. I very badly need to get back to writing more regularly. I’m also in marketing, which keeps me on my toes, creativity-wise, on a regular basis.

Q. Does your character have a name or is it you?

A. Haha! A lot of people ask me that, actually. The character is me 🙂

Chinie Diaz reassures us that it’s okay if we’re still trying to figure it all out. Not everyone follows the same trajectory. No one was really ever given a manual to follow and work out all the kinks of life. If we continuously work on ourselves, we’ll learn that it isn’t so much about where we end up but how we got there.