Bringing Up Boys: a mother’s courage to bridge the emotional gap 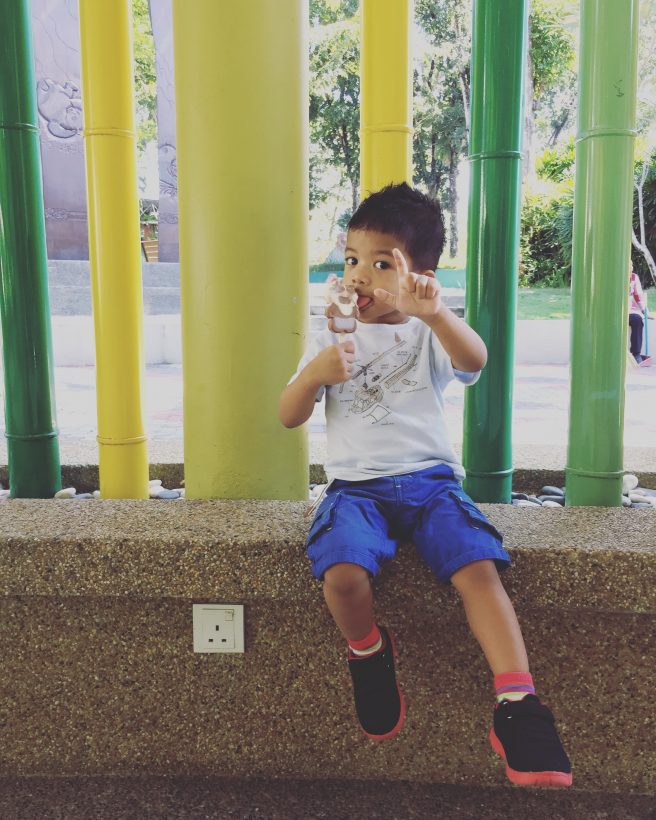 My son Khaleeli is turning 3 soon.

He is blooming and thriving ever so wonderfully, absorbing every little detail of the world around him, just like any other toddler would do.

He is beautiful, in his very own way, very expressive, naturally wired for rough, physical play and obviously developing a mind of his own.

He will take every chance to imitate everything adults do around him, including house chores.  Like sweeping the floor, for instance.

“Khaleeli, put that broom away.  You’re just like a girl, love to do housework!,” said his grandmother.

For starters, he is just a little toddler.  Then, I realized the fact that he’ll definitely be getting more of those words as he grows older.

I can’t help but feel weary of this kind of statements – so what if my son wants to help with housework?

In fact, do we still have to categorize things according to gender?  Why are we still pressuring our children with ridiculous expectations that they have to achieve in order to live up to their gender?

I wish that it never mattered.

When it comes to boys, how often do we hear people asking them to “man up”?   That “boys will always be boys”? That “big boys don’t cry” and “tears are signs of weakness”?

If the answer is too many to recall, that could dangerously mean that the message is so saturated within our society, subconsciously poisoning the minds of our children and already shaping a skewed, unfair expectations of being a man.

Once in high-school, I remember learning life skills – a subject that covers all the essential skills that every person needs to know for life. Yet, when it comes to selecting our specialization, there were only two boys (one of them was a close friend of mine) who dared to venture into cooking and sewing class.

I remember being proud of them for daring to break the stereotype and pursuing their interest in something that has been long and undeservingly associated with only girls.  Alas, a few days later, they were gone.

In retrospect, I wonder if it was really because of their lack of interest, or was it because of the peer pressure that “boys are not supposed to cook and sew”?

I highly suspect it was the latter.

The fear of being labeled as weak, as “womanly” or queer often drives them to suppress their compassionate and caregiving side, causing them to lose grip of their own emotions and subsequently the emotions of their loved ones.

The struggle with masculine stereotypes, where “real men” are defined by their ability to suppress their emotions, display strength and dominance in their attitude (even at the expense of themselves or others) and be a successful and high-performing breadwinners is taking a big toll, to the point that it contributes to rising rates of depression and even suicide in men.

Today, depression in men is often left untreated, and what’s more disturbing is that they lack the skill to recognize it and seek treatment, even when it’s plaguing them for their whole life.

A recent study by psychologists at the University of Westminster in London found out that because of these societal expectations, men appear to have a poorer understanding of mental health and aren’t as good at detecting symptoms of depression compared to women.

Could this be because they are so emotionally out of touch?

If yes, do our boys deserve this?

I certainly don’t think so.

“I alone cannot change the world, but I can cast a stone across the waters to create many ripples.” – Mother Teresa

In the spirit of Mother Teresa’s wise words, I see the powerful role a mother like me can play in bringing up our beloved boys.

It begins with raising them with nobler intentions – that’s to help them grow into emotionally content and happier men.

There will be times when our boys need to vent their emotions, so let them do it. Just like we hug and console our daughters, treat our boys ever the same.  Crying is not equivalent to weakness, tears are merely letting frustrations and sadness flow and making space for the heart to move forward.

Certainly, our boys need to learn to own up to their life and take responsibilities, so yes, don’t take curfew and discipline lightly.  Never let them drift away in assumptions and presumptions about the world.  Pull them close, let them learn about the world from you.

Let our boys learn to give and receive, it starts with letting them contribute to the home.  A broom doesn’t make them less of a boy, doing house chores doesn’t turn them into a girl.  Cleaning up after their own mess is a life skill they’ll thank you for when they’re older, and so will their spouses and life partners later.

Give our boys endless love and shower them with compassion, because when they receive plenty they’ll learn to show and give out more.

Mothers, we have the power.

Let’s start the ripple, because our boys deserve better.