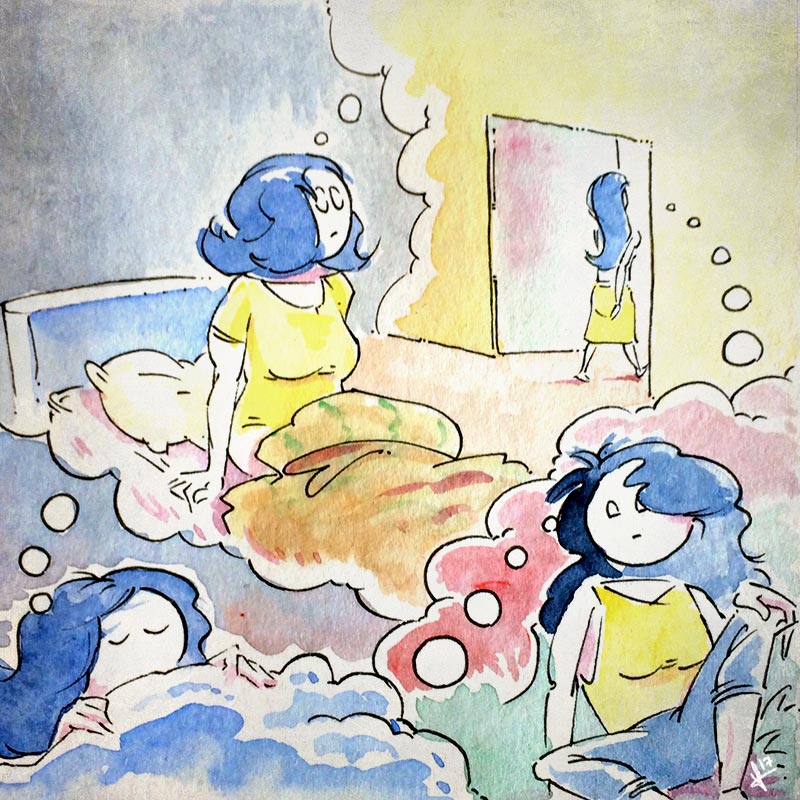 “After waking from my dream, I came back to reality. But my reality remains fictional… The most beautiful snow crystal in the world and the most beautiful word in the world still don’t exist. They don’t command any meaning. I think of the words I haven’t discovered yet. But that’s impossible.”

I first discovered The Impossible Fairy Tale last year while flipping through the Graywolf Press catalog and was immediately impatient for its release. It sounded exactly like something I would love: two young girls, one lucky and spoiled and the other luckless and invisible, and a writer confronted by her own creations. I was expecting something a bit dark, but lyrically beautiful and deep.

Yet after a month of tedious reading, I’m forced to admit that I have never before read a book that has left me feeling so very conflicted.

At the beginning of the novel, Han spins a dark tale of two girls at the threshold between childhood and their approaching teenage years. Mia is a “lucky” girl because she is pretty, innocent, spoiled, and has two fathers. She is a girl who has every single color in the world. The Child, on the other hand, is so luckless that nobody even knows her name. If Mia is colorful, then the Child is darkness and anger. One day, the Child sneaks into their classroom after hours and adds twisted and violent writing to each student’s journal, an act which sets off a swift unraveling of her nerves and reason.

In retrospect, I enjoyed this first part of the novel the most. Han does a fantastic job of tapping into prepubescent angst. She uses the Child as the magnifying glass through which she reveals the violence and anger inherent in children of that age, no matter how sweet or friendly they appear to be. One boy wants to kill a newly hatched chick; Mia’s best friend steals from her. Best of all, Han fleshes out each character so that you can see why they behave the way they do. The child who is bullied at home becomes vicious with his peers while the girl taking care of her elderly grandmother takes to lying. Even if they are only mentioned in a paragraph or two, each character has a multidimensionality that lends a realness and relatability to what is otherwise a very surreal novel.

It was in the second half of the novel, however, where things started to fall apart for me. Rather than continuing to follow the two girls, we instead dip into the mind and dreams of the female writer trying to write Mia and the Child’s story.  We spend a few chapters in this woman’s dreams, a few chapters in her writing, and a few in “reality” until they all start to blend together. The Child comes to visit her and, together with the writer, we begin to question: what makes a character fictional? How much control does a writer have over the story she writes or the characters she creates?

I feel that I should first clarify that there is no contesting Han’s skill. One moment she’s waxing deep and metaphorical about a writer’s process and another she dips us into the writer’s mindset through a series of short, almost erratic sentences. To encompass so many different styles of narration in a single novel is a quite the technical feat.

However, this ever-shifting narration did not work for me. If anything, I found the constantly changing tone and narration rather jarring. There were moments of pure poetry, where Han questioned the true role of the writer and the relationship she has with her characters. But it almost felt as though the novel itself had multiple personalities as each chapter jumped from insightful to spasmodic.

And although the idea of a writer confronting her process and creations was one of the elements that drew me to this novel in the first place, there were many instances in which the book felt too aware of itself. Even in the first half of the novel, there were moments where the narrator would refer to what the reader had not yet learned yet, a sort of break in the fourth wall. There was constant allusion to the author’s intention and what Mia and the Child “could know” or “would experience” which I found really pulled me out of the flow of the story. Furthermore, although the characters were realistic and could easily have triggered a reader’s empathy, I never found myself able to get close to the characters. I felt removed from what I was reading, almost like trying to interact with someone through a triple-paned glass.

In sum, The Impossible Fairy Tale was not the book for me. While there are a few moments of real insight and beauty, the jarring abruptness of the rest of the novel prevented me from enjoying it as much as I hoped I would. However, if you are interested in Korean fiction and want a very experimental take on the relationship between an author and their work, you may want to consider picking this up to form your own opinion.

About the Author: Yujoo Han

The author of four short story collections, Yujoo Han was born in Seoul in 1982. She runs the independent publisher Oulipopress and is an active member of an experimental group called Rule. The Impossible Fairy Tale is her first work to be translated into English.