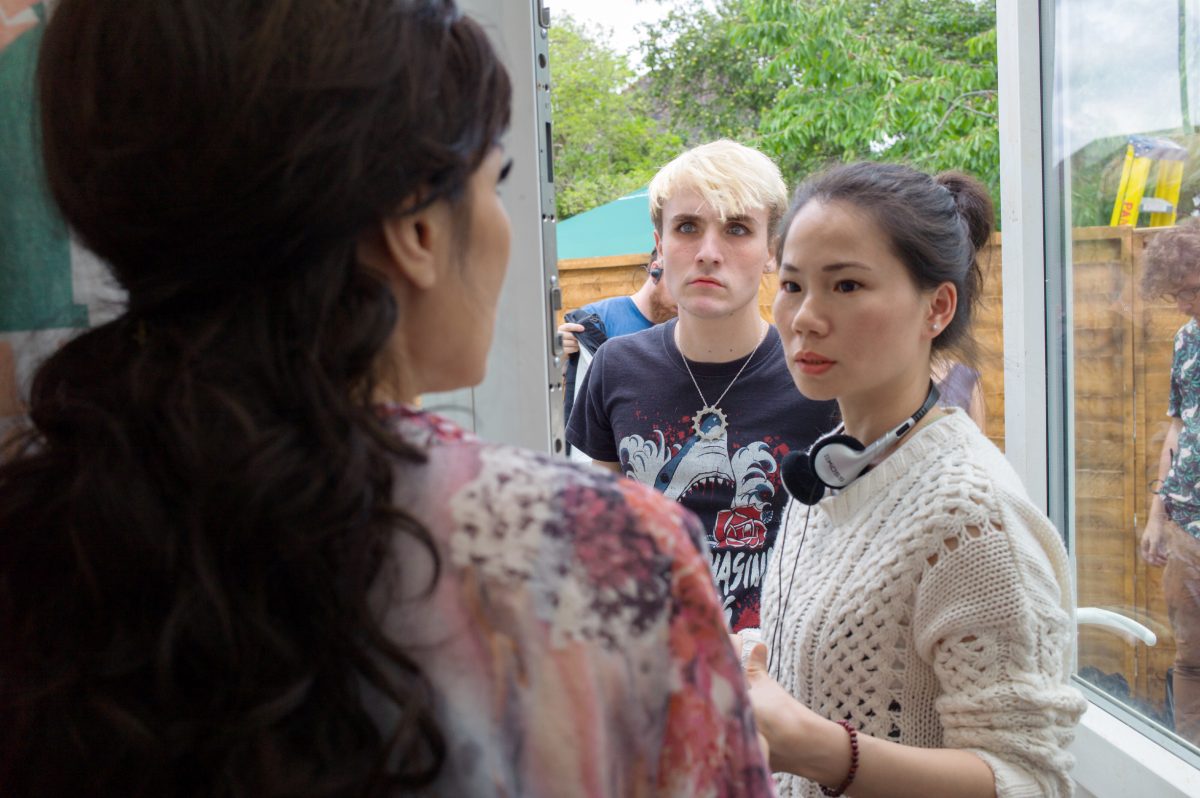 “What? Do you think all people who look Chinese sell DVDs? Are you racist?”

How else was Jenny Lu to respond when a random stranger stopped her, right in the middle of a congested London street, and asked if she sold illegal DVDs.

“Back in 2009 illegal DVDs were very popular. It makes me angry because of the generalization. People who don’t know our culture, have probably never been to Asia or met other Asian groups, build up these imaginations. We need to make a sound. We need to make our voice heard. Make a scene so they remember it. I think it embarrassed him. It must have felt crazy to have an Asian woman shouting at him,” says an amused Jenny, a London-based Taiwanese film director.

Little did she know that this same urge to make a scene and have her voice heard would lead her to write The Receptionist, a film which challenges the world to take a hard look at the sex trade industry. The drama follows the lives of Asian women who had come to London with hopes and dreams but end up working in an illegal massage parlor to survive.

The film received funding from the Taiwanese government and a Kickstarter campaign and premiered in Taiwan in 2016 at the Golden Horse Film Festival. In June 2017 the film screened at the Edinburgh Film Festival and Jenny garnered praise as both a creative storyteller and first time director. Soon other nominations followed, from the Milan International Film Award to the Salento International Film Festival in Italy, and most recently, she won the Emerging Director award at the 40th AAIFF, New York.

“I feel as a creator, everything I make, I have to put my own emotions in it, otherwise it won’t be real or relatable. Everyone is always looking for that realness. From writing to directing to editing, I always have a need to show truthful reality to make people question certain elements in their lives, what they are chasing after. When they watch The Receptionist, they feel like they can cry in the dark. For me that is important. In that moment, everything is worth it. If I make a film for entertainment purposes, then the whole setting and design of the film will be different,” says Jenny.

Part of what makes The Receptionist so hard-hitting is that it isn’t just a sentimental story, but is largely based on the life of Jenny’s friend, Anna.

Jenny first met Anna at a Chinese dinner gathering in London’s Chinatown. Anna came from a small village in China, hoping to scrounge out a better life for her family and pay off her debts, accrued when her family tried to arrange a fake marriage for her and to financially assist her brother’s family.

However, Anna’s story didn’t have a happy ending. Anna wasn’t earning enough to both support herself and send money back, so she began to work as a masseur in an illegal massage parlor in London. Two years later Anna jumped off a pedestrian bridge outside Heathrow Airport.

Looking somber, Jenny tells me, “I was really shocked [by Anna’s suicide] because I didn’t know why she did it. I felt there was a need to find out more, therefore I started to find a way to meet and interview her colleagues. It took some trust. Eventually, the more I listened, I felt compelled to tell theirs and Anna’s stories. It felt like a mission.”

“But also, so many of us take things for granted – people living around us, next door to us, people that are just there. We don’t appreciate their existence until they are gone. In some ways, I feel a little guilt. If I just paid a little more attention to her, listened to her story and talked with her, maybe she would still be alive today. There are many people around us like that. We are always on the move and so preoccupied that we don’t really care until suddenly they are taken away from us.”

The Receptionist is heavily based on the reality of Anna’s life and the lives of other girls in the sex industry disguised as masseurs. The story is told from the perspective of a fictional character, Tina, who is a Taiwanese graduate living in London during the financial crisis of 2008-2009. Unable to find work, she finds employment as a receptionist in an illegal massage parlor in London. The story gives honest insights into the lives of the young sex workers – physically, mentally and emotionally.

Jenny doesn’t pull any punches when it comes to the treatments of the girls, exposing just enough details to show what the girls suffer through every day. The paranoia of being discovered, the brutality of their clients, the threat of gangsters asking for protection money as well as squabbles, envies and competitions between one another, all happening under the confinement of one roof.

Yet, Jenny wanted The Receptionist to be more than just a documentary. In the midst of such an unpleasant situation, she delves more into revealing the deeper core values of humanity.

“Tina’s character is like us. She took us into that world that we don’t normally know or we often overlook and have established preconceptions about sex workers. ‘Oh, they are dirty. They are doing demoralizing things.’ She feels like she is better than them, thinking she is clean and doesn’t want to touch their clothes.”

“But then she realized that they all are just like her. They miss home. They crave love and they just want themselves or their family to have better lives. Sometimes it feels like they fight against one another over money but they still support each other when there is trouble. They cook for each other like a family. They laugh, they joke. She feels the warmth,” she comments.

“These girls take on so much because this society is so money orientated. The concept is, the more money made, the better the life is. It is never ending like a black hole. It is quick money but every day, they question if they are doing the right thing. They do feel the need to quit but they are trapped. It’s more or less the same kind of dilemma we all face – take on jobs we don’t like because there is a need to lead a better life and also because that’s how society judges us. For these girls, they feel like if they wear better clothes, they can have that reputation. What I feel so much in them, is also in us,” adds Jenny.

Despite the integrity of the film, I question Jenny on the foundational concept of many Asian families sending their children abroad to earn more so the family can have a better life.

“It still happens and I think that’s very dangerous. You send somebody over and they send you money like a supplier. Many think it is a glamorous lifestyle, but more often than not it isn’t. Many haven’t seen their family for years because of the image their family built up back home, not being able to tell their family about their real job as a dishwasher. It’s ego. They say, ‘Too much pressure. Too much hassle,’ and then they lose the relation.”

“Up until now, some of my family still questions my choice of work, about my future. They don’t see the revenues in film-making and would prefer I went back to teaching.” Jenny is a Ph.D. graduate from Chelsea College of Art in University of Arts, London and was giving lectures on Fine Art at GoldSmith’s and other universities before she entered the filmmaking world.

Speaking to Jenny at length makes me wonder: did directing The Receptionist, a film that is so personal and closely related to her, change her at all?

“I didn’t really communicate my ideas with other people while I made video art. I feel what I make is right and that’s it. However, having stepped into the film industry, I feel really humbled because I rely on the whole crew and the whole world, even the weather to make a film successful. It makes me feel small and respectful. It is a powerful thing for people working towards one goal.”

“Having said that, it is difficult to be a female director. I have to speak louder and be a little more insistent to make people notice. As an Asian woman, there aren’t so many examples because we aren’t given enough opportunities or beliefs that we are capable of making things happen. I feel I have to give that example. When I make films, I tend to bring more Asian women into my cast or crews. I have begun to write something, but it will be a female-led story as there is just not enough female-featured film out there,” replies Jenny.

I also question Jenny on her motive in mentioning the book Unbearable Lightness of Being.

“The reason why [the character] Sasa gave Tina the book, is like saying, ‘I have lived a part of my life and now you have seen how I lived, choose yours.’ In the book, you only live once and all the decisions you make, whether big or small, it changes our lives forever.”

The Receptionist isn’t a film you can watch once and forget about. You will never look the other way again. Yet it leaves you bewildered as to how we can move forward as individuals or a community to fight for and support girls that are trapped in similar lifestyles.

“When I interviewed these girls, there is an acute sense of need to have someone to talk to. At first, they don’t trust you but eventually, when you’ve gained their trust, they just want to tell you everything. They can’t talk to their family or friends. If there is support in the community and understanding for the reasons behind their lifestyles instead of condemnation, maybe we will know how to help. In retrospect, the movie will give viewers a moment to think about their lives by questioning themselves, at least make them think. Perhaps they can take up the theme and share it with their family and tell them how to act,” Jenny suggests.

The Receptionist will be screened at the London Raindance Festival on 21-22 September this year.