Farewell My King – How Thai women remember the late king 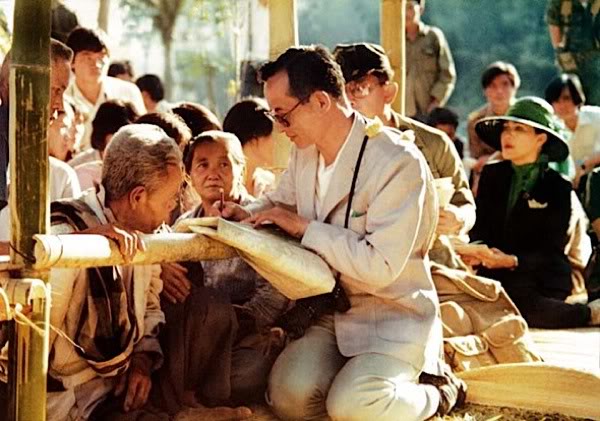 When I visited Bangkok five years ago I noticed the street vendors selling small Buddha pendants and Jasmine flower bracelets. Some were also selling old black and white photos of the then King Bhumibol Adulyadej. Photos of the King! I know some royals, like the British princes and the Jordanian queen, are celebrities, popular with tourists and foreigners. As a tourist myself, however, I knew those pictures were not meant for me. Then I thought, ‘Do Thai people have to buy this?’

I’m from Seoul. South Koreans know the details of the military dictatorship in the previous generation and have witnessed the bizarre regime of North Korea. We know a forced display of affection when we see it. This was not the case.

If those photos had been an ‘obligation’ in any way, they would have been official portraits of the king. Like the ones you see in Thai airports or government buildings. But no, those photos were old and personal. The young king looking lovingly at his wife, sitting on the ground with a bunch of people. I could feel the warmth from the photos, and from the pride and affection the Thai people felt for their king. So I bought two. He was not my king, but I wanted to cherish the connection a king has with his people.

When I heard that the Thai king had passed away, I felt shaken. It’s sad to see a grand figure who happens to be a good person leaving us behind in this turbulent time. I could not even imagine the shock of the Thai people. The whole country of Thailand stopped. In the media, Thai people, old and young, women and men, seemed devastated, wailing. In how many countries will people take the monarch’s departure this personally?

Then I wondered again. What do Thai people really think behind the camera? In English media, most interviews were with celebrities, foreign politicians, or even the expats in Bangkok who probably have the weakest emotional connection to the king’s passing. I wanted to know what real Thai women think.

Some writers of April Magazine and I asked the Thai women in our vicinity. We said they could be quoted anonymously, and we asked Thai women outside Thailand first. In retrospect, all the caution was unnecessary. We talked to about fifteen interviewees and all were eager to talk. Here are some of their words.

“He was a role model in my life. I have to follow the initiative of the King in my own life: not spending money on lavish things and always doing my best I’m proud to have found this great king and grateful that he has been a great role model for me. The King will be in my memory forever.” (Sorunya Jendong)

“If you ask Thai people about King Bhumibol most of answers you get are about the royal duties that he did for his people. For me he’s not only the king, but also a model for my behavior. He looked like the father of all people.

I don’t know how to express what I feel about him into words. He gave us education, better lives in the countryside. He has shown us that being king is not the most comfortable position. I can only say we were lucky to have a king that worked so hard for his people.” (Charukit Nammechai)

“He shed sweat while he worked. An image that has always stayed in my mind, and the minds of the people of Thailand.” (Thapanee Sitarisu)

“When I was little my father said, ‘In my life, I never saw a king who worked as hard for the people, so you should love and remember the king always.’ When I studied in high school, the teacher gave me an assignment about the king. I was really surprised when I saw the book, because it was so thick. I opened the book, read the king’s profile first and read about the royal duties. Was the king not tired? He’s not human, he is a god that can breathe because he could do everything for the people.

Now I study education at college and on the TV I saw the news stating that ‘the king had passed away.’ Then my tears ran all on their own. And I saw a posting in Facebook, quoting the king saying “Are you a teacher? Take care of the children and teach them to be good people (เป็นครูใช่ไหม? ขอฝากเด็กๆด้วยนะ และช่วยสอนเขาให้เป็นคนดี).” I promised in myself I would be a good teacher.” (Onwanya Rungsaeng)

“Losing him is not something that many of Thai people, including myself, can put simply into words. The feeling that we felt is not just one of losing the king of our country, but that we have lost a father who have done numerous things for us without being able to get repaid anything.

Yes, we view him as a dad. A dad that did everything for his children and his home, our country. It is really hard to accept the fact that we don’t have him anymore. I was so confused when he passed away. Everything in me has shut down. All I could do was cry. Cry until I felt tired and went to sleep. Cry when I woke up in the morning. This continued for a week.

Even I was amazed to see how much we had loved him. For most Thai people, the moment that the government announced the passing of his majesty was like the heart of our country has stopped. I will never forget that moment.” (Chamaiphon Wuttigorn)

“Since I was a little girl, I had learned thousands of times that the royal family were visiting many rural and remote areas throughout the country, regardless of convenience or facilities. The King travelled along bumpy roads, in areas without electricity, to the back country, and even the dangerous areas of communist insurgents.

King Bhumibol had served the people of Thailand for 70 years since his coronation in 1950. I cannot forget how the King and the royal family travelled in difficult conditions to see his people in remote areas, sat on the ground talking with his people, asking how he could help them, bringing that information to royal development projects to improve the well-being and education of the Thais. His royal palace in Bangkok was converted into a demonstration and training centre. His royal projects benefited millions of the poor and helped them to earn their living.

King Bhumibol is deeply revered and rooted in Thai people’s hearts because of his kindness and good manners, his modesty, his reserve, and his gentleness. He worked very hard to help his people and improve their well-being regardless of race or religion. People can feel the love and generosity that has connected them as a family and that’s why Thais call His Majesty the King the ‘Father of the Nation’.” (Apitsada Nethercott)

“He had unconditional love for all the people, regardless of races and religion. He was the only man in the country who could truly unite all the people as one.

I hope to tell you that we are not forced to love the King and other Royals, but we love them deeply in our heart knowing they’ve done a lot for our country in the past.” (Nantnaphat C.)

I don’t need to enumerate all their answers because they were surprisingly similar. Even to this day, it puzzles me that so many people felt the same sentiment and shared the same memories, with such profound individual impact.

A couple of months after the king’s death, I visited Bangkok again and the first thing I noticed was the people’s black clothing. Their faces looked brighter than what I saw in the news, but everything, from websites to TV channels was black and white. Some tourists in a hostel grumbled about not being able to go out and drink at night, not getting what they expected in Bangkok. I wore my black dress through the week. He was not my king, but I wanted to pay respect to the Thai people. It was also a strange feeling to be blended into the flow of mourners. It wasn’t a gloomy or even somber emotion but rather the shared intimacy.

Recently I read an interview with an old Thai lady to explain the puzzle: “Although he may not be physical with us anymore, I feel he will always protect us. So, when I think of him, I feel happiness rush through my whole body. When I think of him, I think of how he had made his people happy and we lived in peace and harmony throughout his reign.”

Now the Thai people say their final farewell to the late king in an elaborate cremation on Thursday that is part of a five-day ceremony, completing a year of mourning. The royal crematorium is majestic and golden, reflecting the 10-month toil of top artisans. The ceremony will be spectacular. Some Thais may feel different from others. Some may not be able to say so, fearing the state and the society. We can talk about the political turmoil and freedom of the press in Thailand till the night grows weary, and it is a valid discussion.

When we see the Thai people gathered one last time, wearing their vulnerable feelings, however, the truth is simple. This king was beloved. This king was respected. For many Thai people, he was the father, a kind of father some of us never had, more reliable than flesh and blood. So when a Thai on Twitter said, “We are not the best country in the world but we have the best King in the world,” I didn’t think I could argue with that.