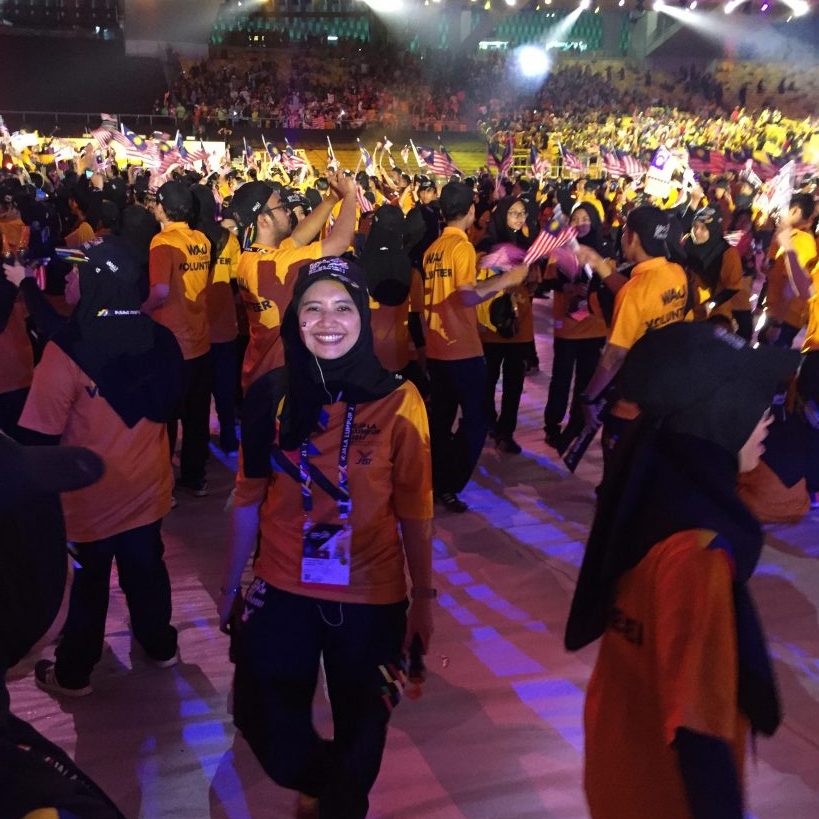 Ever since I was a child, I have always had a sense of curiosity about the world. I had a feeling that it was huge, brimming with knowledge, multitudes of different people and myriad places to be. It has always filled me with a sense of wonder, and the desire to play an active part in it.

My father used to work for the government and he traveled a lot, often coming home with various paraphernalia from the places he had been. Everything had little details that shed some light on where he was and what it was about.

There was only so much I could do as a child, though. I took every opportunity to discover the world. Back in the 90s it was mainly through media like newspapers, books, and television. As I grew older, I became more aware of the world around me and how large it was, knowing that somehow I was sent here to contribute by doing something bigger than myself.

I came to understand the concept of volunteering during my teenage years. At the age of 14 I contemplated registering as a volunteer for the Kuala Lumpur Commonwealth Games 1998, but I was too young and had to be away at boarding school. I once thought of joining the “Rakan Muda”, a youth movement initiated by Malaysia’s Ministry of Youth. Again, I was held back due to age.

Perhaps my ambition was too big for my circumstances, so I started small in my school and university. I took every opportunity to volunteer in clubs and events, each of which widened my experience and led me to learn new things. I am confident that it helped build a lot of my skills in communication, planning and socializing – the skills that I found handy for my subsequent professional career.

After so many years, my first big scale volunteering experience finally happened. In August 2017 I was selected to be a volunteer for the Kuala Lumpur Southeast Asia (SEA) Games here in my home country. To be part of a prestigious event on an international scale is honorable, but if felt even more meaningful as I realized that I was actually contributing to my own country. I knew I had to make it.

I would never say that volunteering is easy. It does demand a degree of commitment and effort, particularly considering that I am a mother of two with a career and a family to juggle. For the most part, having a supportive spouse and a family is imperative, as well as the determination to make it work.

Volunteering exposes you to a spectrum of human behavior, which, truth be told, does not often work in your favor. You meet a new group of people, of different backgrounds, ages, and upbringing, that will either make you or break you. You learn to cooperate, to understand and to accept each other, and learn to work with each other regardless of the differences, in order to achieve one common goal.

It teaches you the essence of giving without expecting much in return, opening up space for you to reflect on honesty, generosity, and humility and it’s magical way of making you feel positive about yourself as a human being, and helps boost your self-esteem.

At the KL 2017 SEA Games, I was a part of a massive ensemble of volunteers given the responsibility of conducting performances during the opening and closing ceremonies. It might seem fun and glamorous on the surface, but the real work lies in finding ways to synchronize and trust each other, the discipline to adhere to instructions and the perseverance to endure the long hours of training and rehearsals.

Most of all, it taught me that humans are absolutely powerful when they come together. At the end of the day, I watched in awe as the ceremony unfolded, utterly taken aback by its magnificence and how each of our minute tasks beautifully summed up to a full performance for the spectators of the world.

Amid the chaotic cues and voices that came through my personal radio communication device, I took my time to absorb every bit of the moment, while marveling at the thought of how much humans could achieve when we work together despite our differences, and accepting instead of shunning each other.

The experience that I gained from volunteering is priceless. Nothing beats the feeling of being part of something bigger than yourself, knowing that your little part has contributed to the success of something that matters to the world.

When it comes to volunteering in a different setting, such as a natural disaster or humanitarian crisis, I do believe that the experience would be richer, the challenges harder, but the impact on a person far greater.

As a woman, I find volunteering empowering as I am allowed to challenge myself and explore my true capabilities, while reaching out and letting the world know that I too can make a difference.

Being a part of a community and discovering the world through people is also another advantage of volunteering. It expands your network tremendously, connecting you with people who could turn out to become your new best friend or help lift you higher towards your goals. Not to mention that it does wonders for your resume too.

After all, it is an act of self-discovery, a journey that is unique to each and every one of us.

I urge you to take up volunteering at least once, not for the sake of just doing it, but for the sake of making a change in this world with your own strength. It would be one of the most rewarding things you could do in this life.

Everyone will definitely experience it differently, and ultimately, as the saying of Mahatma Gandhi goes: “The best way to find yourself is to lose yourself in the service of others”.