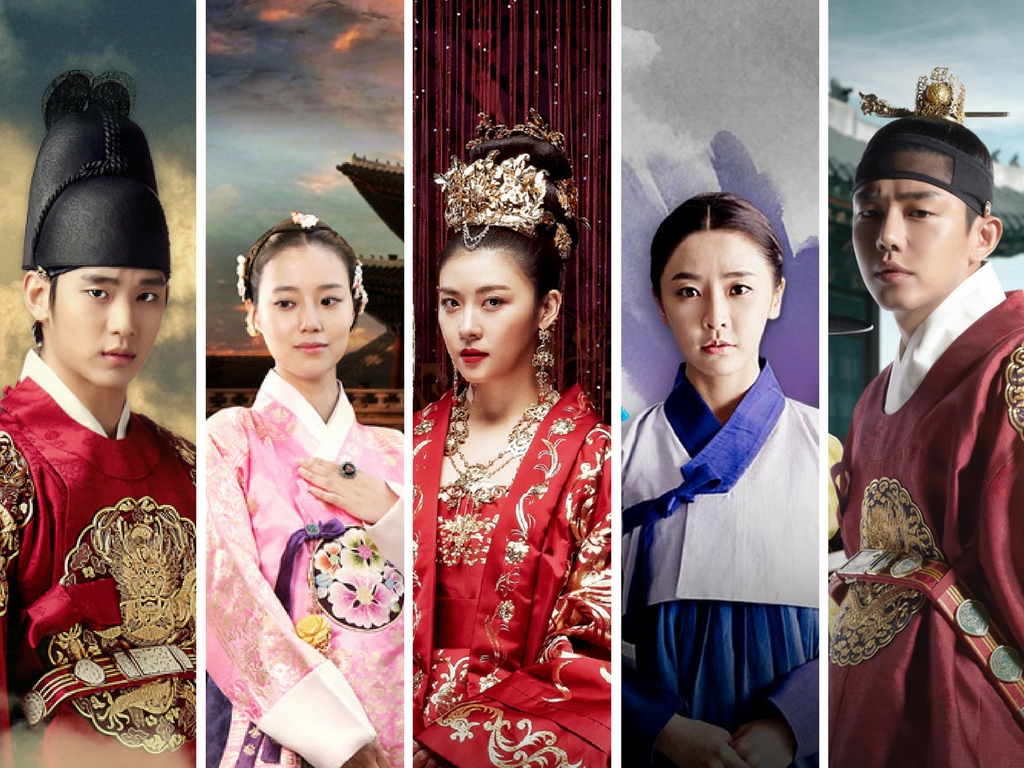 I started watching Asian dramas in 2006 while facing personal problems, and ever since they have been my happiness remedy. I watch all kinds of dramas, but historical dramas hold a special place in my heart. They are more mature, with political plots and wars. They are also more violent (many characters meet bloody ends) and the romance is more intense and deep (“love you for a thousands years” kind of thing, if you see what I mean).

My favourite thing about historical dramas is how they let me ‘time travel’ far away from my day-to-day worries (I learned so much about different Korean historical eras, kings and dynasties that I think I could win a special Korean history trivial pursuit!). Hey, how can I worry about everyday life problems while people are betrayed for the throne, tortured and even killed! That puts things into perspective. And not least, I also love the costumes and the whole visual delight of these dramas.

A small note on my selection: I prefer the ‘newer’ historical dramas, as the older dramas tend to be longer and more focused on palace intrigues, while I swoon for the romance and the heart-aching love triangles. I also don’t only watch Korean historical dramas. China has improved so much in the art of TV dramas and other Asian countries make interesting take on their histories. But, hey, we gotta start somewhere and Korean drama is an easy answer especially for the beginners. So here with my subjective top 5 of the best Korean historical dramas.

This 2011 drama is a big hit among Korean drama fans and continues to receive amazing reviews and ratings.

It is set in the 15th century during the Joseon Dynasty and tells the story of a forbidden romance between Princess Se Ryung (played by Moon Chae-Won), the daughter of Grand Prince Su Yang, and Kim Seung-yoo, the son of her father’s mortal enemy (played by Park Si-Hoo). From a cheerful and romantic start, it quickly moves into a Romeo and Juliet melodrama with blood and tears galore.

The actors successfully portray complicated emotions, and no one is wholly evil or good. It has a whole package: beautiful love story, wicked love-triangle and a dense political plot that actually makes sense and is interesting to follow. Overall The Princess’ Man is enjoyable and beautifully filmed with a good plot.

Edit Mar 2019: We recommended watching The Princess’ Man on dramafever, but it has shutdown. Still, some alternatives have sprung up.

This one wasn’t so much of a hit when it first came out. It starts beautifully – the acting, the images, the romance (ohhhh the romance!!!) and then it goes dark. Really dark and tragic.

Jang Ok Jung offers a fresh take on the romance between royal concubine Jang Ok Jung (a.k.a. Jang Hui-bin), and King Sukjong during the Joseon Dynasty. Jank Ok Jung was traditionally portrayed as the villain of several popular historical dramas, and histories portray her as manipulative and power-hungry. This drama tells her story from a totally different perspective, and the actress Kim Tae-Hee gives a good shot at portraying her complex personality on the edge of good and evil.

The story starts with Jang Ok Jung’s youth as a Joseon era ‘fashion designer’ and ends in more conventional harem-palace tragedy. Despite the predictable end (it follows history …), it is worth a try and has a special place in my heart. Special mention of the character of Prince Dongpyung who gives you serious second lead love syndrome!

This is a seriously underrated Korean drama and I want to do it justice by saying how much I loved everything about it!

Maids tells the story of a young noble girl that falls into slavery after her father is wrongly accused of treason. The lead actress, Jeong Yu-Mi, does an amazing job portraying the young girl who grows from an arrogant young noble into an extremely mature and determined person. There are lots of ups and downs, a mystery to discover, an investigation to fulfill, and of course love-love-love.

All the cast did great, and I became attached to every one of them in their own way (yes, even the villains). There is a love-triangle (of course! My heart skipped a beat or two when watching) and lots of heartbreaking scenes. Overall this drama is more mature (but without ‘mature content’) and is not your typical relaxing romance. Also, the music in Maids is absolutely beautiful – and I still spend hours listening to its soundtrack.

Edit Mar 2019: We recommended watching Maids on dramafever, but it has shutdown. Still, some alternatives have sprung up.

Ok, now we move into ‘serious’ territory – meaning dramas I am so obsessed with that I have already re-watched them several times!

The Moon Embracing The Sun is a perfectly beautiful love story between an imaginary Joseon prince (played by Kim Soo-Hyun) and his childhood sweetheart (played by Han Ga-In). A tale of love that survived years of separation and adversity. This drama is original and quite typical at the same time. Original because it brings you into the world of ‘Shamans’ during an imaginary Joseon period. It is also quite conventional because the love story is predictable and magically sweet (but who cares, right?).

The first several episodes portray the main characters as teenagers and let me tell you: this young crew did a fantastic job! They display stunning acting skills and the story they both tell makes you laugh and cry by turns. I was smiling so much during these first episodes that I may even have drooled a bit … Later the story slows down to meditate on the power of love and destiny. Overall, a very enjoyable drama that offers a great escape into an epic love story.

There are not enough words to describe how much I adore this drama! I usually don’t recommend it as a first drama to watch for ‘Asian drama newbies’ because it is quite long (at 51 episodes it is by far the longest Korean drama I have seen). But if you don’t mind the length, then watch this drama!

It is based on historical events, depicting the story of Empress Ki who went from being a Korean (Goryeo at the time) concubine to the Empress of the Yuan dynasty of China (that’s the one founded by the Mongols). Despite its length, the drama is never boring as it takes us through several distinct phases: the youth of Empress Ki as a badass ‘bandit’ in Goryeo, her as a servant in the Palace, and finally as concubine and queen.

All the actors are beautiful and skilled (some serious eye-candy going on in this drama!) starting from the lead actress Ha Ji-Won, the love-triangle is just out of this world, and even the political intrigue is amazingly well conducted. By the time it aired in Korea in 2013 I was watching each episode twice (without subtitles – then with subtitles) and I have re-watched it since. This drama received multiple awards, and was immensely popular in Korea. Empress Ki displays amazing acting, gorgeous costumes and a great soundtrack. Needless to say, this drama is my all-time favourite.

Sungkyunkwan Scandal didn’t make it into my top 5, but it is definitely a good drama and worth watching. It’s a light comedy about a girl who pretends to be a boy in order to join the prestigious Sungkyunkwan academy during the Joseon dynasty. If you want something sweet and funny, this drama is a good match!

(Written by Cecile. Cecile is a European blogger based in the US. She blogs about Asian beauty and Asian dramas on her Koreainbeauty.com blog.)