I’m not feeling the “Chinese Burn” 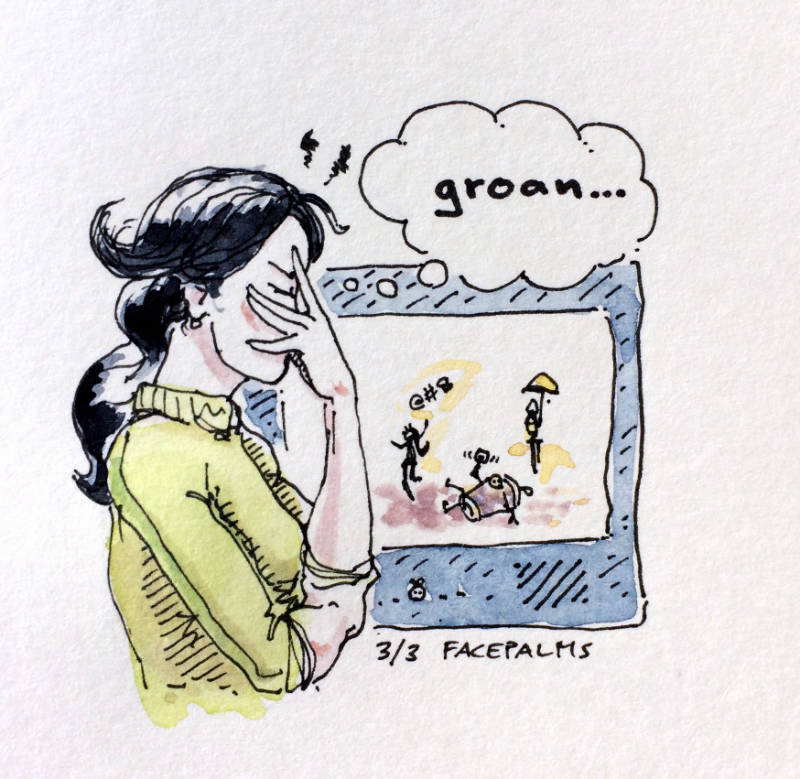 “Everyone knows what Chinese girls are like right? Wrong! ” the narrator pauses, then and continues, “These girls you’re about to see aren’t your ordinary Chinese girls.”

My friends and I were wondering why this show sparked controversy and decided to see it for ourselves as we heard that it was a sitcom with both humor and real-life parallels. After that line, I was already feeling like it was about to head downhill.

“It’s such a cliché story about a person of Asian descent who’s trying to rebel against society,” I said.

My friend S interjected, “Well, the best we can do is give it the benefit of the doubt and see it for ourselves.”

I acquiesced and settled in to see if there would be any moments that I could relate to. In particular, I could see where the particular character, Elizabeth, was coming from as she was a millennial like me, facing similar struggles in the job market. She ended up working at a boba-tea (bubble tea) place, dressed up as a life-sized boba-tea cup, only to get fired right away. I  tried to keep that in mind as the show progressed.

Before watching the show I thought that the intention was for these women of Asian descent to empower themselves. However, as the show went on, I felt like its aim was completely opposite.

“Wow! After standing up for herself, she goes back to playing that degrading role?” I said when I saw Jackie, a half-head shaven and all-black-wearing Chinese British woman, recite a line in a stereotypical Asian accent after previously expressing her disdain for being seen as the “stereotypical Asian” and getting into a fight with a few white British men.

That was just one example of what turned into a string of scenes where Elizabeth and Jackie showed their negative associations about Asian guys and “FOBS” or people that had recently immigrated from Asia. I realized that in this show the three women’s ‘personal empowerment’ was coming at the expense of distancing themselves from anything that was ‘Asian’.

To begin with, Elizabeth and Jackie were accompanied by a recent immigrant from Taiwan named Fufu. Throughout the show, Fufu hangs out with the girls only to have sarcastic remarks hurled at her. In particular there is one scene where Fufu says, “Chinese girls don’t drink alcohol,” only for Jackie to retort, “Well this is how British Girls do it.”

This interaction shows how Jackie is trying to distance herself from her Asian identity by implying that Fufu is not a “British Girl” and therefore someone she should not associate with.

The result is a perpetuation of the stereotype that everything ‘Asian’ is negative, which is the obverse of the model minority myth—that creation of American sociologist William Petersen that regards Asians highly for their discipline and studious behavior.

I remember my 21st birthday when I had a glass of wine to celebrate, only for other people around me to stare at me as though I was mad. Although I’m not a mind reader, the looks from predominantly Caucasian American people reminded me of that model minority stereotype.

After that experience to even think about insulting another person for being Asian is wrong in my eyes and I felt yet more annoyed when Jackie narrated a scene and introduced the acronym D.A.G.S: Desperate Asian Guys.

“They dress well, but too well,” she elaborates as we see these men interacting with each other, looking like they’re having a good time.

My friends and I rolled our eyes in disdain. J spat, “Why did she have to insert ‘Asian’ there? Can’t any guy be desperate?”

I added, “Those comments were unwarranted. Those men didn’t talk to them, so how could they have such opinions in the first place?”

This scene vilified Asian men by categorizing them as ‘desperate’. With her words Jackie distances herself from these ‘foreign’ men. The men’s ‘Asian heritage’ is a mark of their undesirability and shows like this perpetuate the trope that Asian men are sexually deviant.

This can be traced back to the early 20th century when movies like Broken Blossoms (1919), depicted Asian men as deviants threatening to “destroy the nuclear family.” The men’s Asian heritage was the stain of their foreignness and should any boundaries be crossed, these men would suffer the consequences.

Today negative stereotypes towards Asians continue to flourish in our media and the co-creator of the show Shin-Fei Chen, who plays Elizabeth, acknowledges that. At the same time, her reasoning for showcasing these stereotypes on the show seemed like a contradiction to me. “In order to smash stereotypes, you have to offer them up,” she says.

Sure, you can showcase the two scenes I mentioned above in order to make a point that putting down Asian traits is problematic. However, is the audience going to get it?

As much as I want to be optimistic, my personal experience has shown that some beliefs are hard to drop. BBC is a British Channel and although their audience has become more diverse over the years, I still think that there are people watching this particular show that may well believe Asian people are inferior.

I mean, if people look at me weirdly to this day for holding a wine glass, or if people keep talking about how they are creeped out whenever a person “doesn’t act Asian.” We are still far from running out of non-Asians who hold stereotypes as self-evident truth.

Luckily, not all hope is lost. Nowadays independent media is the buzz and people are looking to YouTube and Netflix for entertainment. Channels like Wong Fu Productions are helping people of Asian descent gain traction with their acting careers and media content.

In return, people like me can enjoy watching these channels that give a more nuanced representation of Asians. In these channels, I can find relatable stories where Asian men and women come together to empower each other, whether it’s school related, romance or career opportunities.

As for the women who created Chinese Burn, I’m not asserting that they themselves are problematic. Rather, I would advocate for them and any person of Asian descent to represent themselves in independently in alternative forms of media, because by moving towards those outlets, they can push back against the stereotypes placed upon them by mainstream media.

Deep down, I want to see people of Asian descent thrive in the media. However, there are other ways to achieve that. We no longer need to rely on mainstream Western outlets like the BBC or Hollywood to get our voices and desire for representation heard. With the rise of independent online media we can show the world that Asians are nuanced people with hopes and dreams just like everyone else.

PS — I’m pulling a shameless plug here, but I am currently also collaborating with three other women of Asian descent on a YouTube channel called ‘Journey to the West’ and if you’re interested in seeing more of my thoughts on “Chinese Burn” please visit us on YouTube and support us.