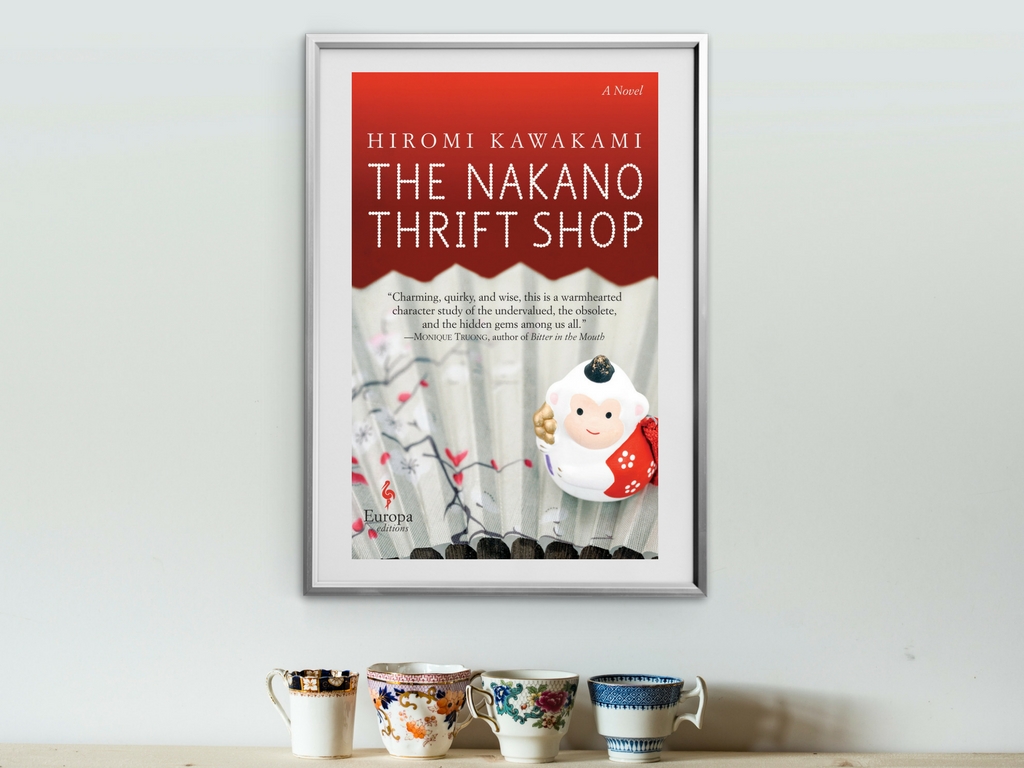 is home to a colorful cast of characters. First of all, there is Mr. Nakano, the rather eccentric, middle-aged shop owner who has both a wife and a mistress and whose favorite phrase is “You know what I mean?” Mr. Nakano’s older sister, Masayo, has a passion for decorative crafts and sells more than anyone else at the shop because of her charm. Then there’s Takeo, the awkward young man who helps Mr. Nakano with the heavy lifting and barely speaks, except to say “Sorry.”

Last but not least, there is our narrator, Hitomi. What she lacks in sales experience she makes up for in curiosity about the others around her. And it’s important that you know that Hitomi thinks she might love Takeo, except that most of the time, she actually hates him.

Each one of these characters has their own humor and their own colorful personalities. The thrift shop itself almost feels alive with its random assortment of second-hand items. And yet the beauty of this novel comes from the fact that it is all so refreshingly normal.

In The Nakano Thrift Shop

, the author Hiromi Kawakami has written a beautiful celebration of everyday life. Rather than relying on magical realism or overly exaggerated plotlines, she highlights the humor and subtlety of our interactions. She builds the novel around an exploration of how the angst and self-involvement of youth evolve into the stubbornness and wisdom of age. I’ve read reviews complaining that “nothing happens” in The Nakano Thrift Shop. On one hand, these reviews are correct, but this is not the kind of novel you read for the plot. It’s a novel you read to discover the beauty in the ordinary.

While reading the novel, I was really struck by its tone and immediately began to brainstorm how to best describe it. Unfortunately, the best I can do is to say that The Nakano Thrift Shop

is just so… Japanese.

How unhelpful of me, I know.

What I mean to say is that the novel contains everything that I have come to associate with Japanese literature and film. It has a kind of quiet, self-contained atmosphere which Allison Markin Powell’s translation captures beautifully. When there is dialogue, it’s not forced or overly scripted, but rather takes a random and organically rambling path. Centered mainly around the single stage of Mr. Nakano’s little thrift shop, there isn’t much “action” plot wise. Instead, the focus is on slowly revealing more and more about the characters, peeling back each layer of their outward personalities with each repetition of their daily routine.

As I read, I couldn’t help but imagine the novel as a short, Japanese drama series. Hitomi would be a cute, if rather apathetic main character and Takeo would be played by a tall young actor whose hair would flop down over his eyes every time he shyly looked down.

Is this the most beautifully written novel I’ve read this year? No, it’s not. But I can confidently say that I have never read any other novel so secure in itself. And its core, The Nakano Thrift Shop

is a simple story about simple people and their simple lives and is content to be just that.

If you’re a plot-driven reader, this may not be the book for you. But if you’ve ever wondered what kind of novel Haruki Murakami might write if he were a woman (and a bit funnier), or if you’re looking for something easy and comforting to read this holiday season, The Nakano Thrift Shop may be your cup of tea.

About the Author: Hiromi Kawakami

Hiromi Kawakami was born in Tokyo, Japan, in 1958. She first debuted under the pen name “Yamada Hiromi” in NW-SF No. 16 with the short story “So-shimoku” (“Diptera”).  Kawakami later reinvented herself and in 1994 published a collection of short stories, Kamisama (“God”), under her own name. Her other novels include The Briefcase and Strange Weather in Tokyo. Although Kawakami is most well-known for her off-beat fiction, she is also a literary critic and essayist.