Ode to My Lola 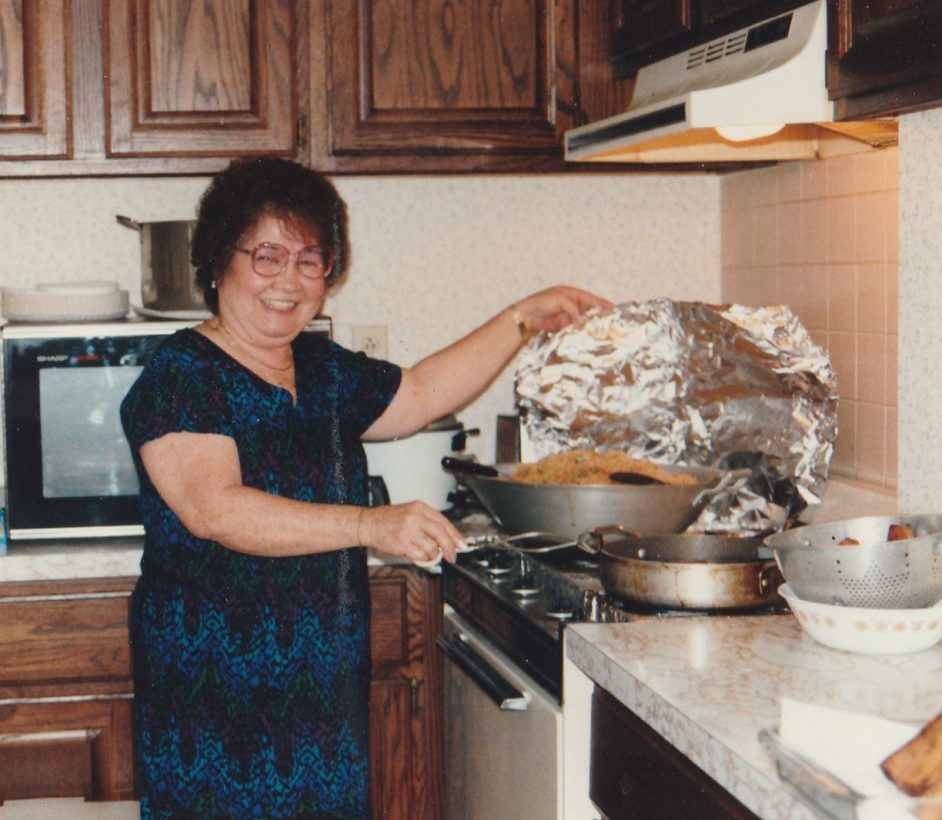 The warm, spiced scent of Calvin Klein’s “Obsession” wafts through the open door with a burst of humid air from inside the apartment. That familiar smell mixes with the sweet and savory notes of the day’s cooking. Hand-rolled lumpia with chicken and vegetable filling, pancit bihon with rice noodles and shrimp, and sticky, sweet cassava cake line aluminum trays along the kitchen counter, ready for pick-up. Pink foam rollers nestled in her hair and a pair of tongs in one hand, my grandmother greets me at the door for a hug and “smelling kiss,” as a smile wrinkles at the corners of her eyes. Dialogue from her favorite dramas babbles on in the background amid the crackle of hot oil in a pan.

“Did you eat yet? Kain na tayo!” She spoons hot rice onto my plate and gestures at a bowl of yesterday’s reheated chicken adobo, whose tangy, garlicky flavor has intensified overnight in the fridge. For us, sharing a home-cooked meal at the same table is one of the many ways we say, “I love you.” Meet Lola Rosy, a woman who was as independent and strong as she was generous and loving.

My earliest memories are of summers spent in transit, a different kind of shared experience. Together, my grandmother and I waited beneath shady oaks at the street corner for a bus to the mall, or sat side-by-side on graffiti-sprayed benches, listening for the whine of the next train. When she needed to buy groceries in Chinatown or refill her prescriptions at the local drugstore, I was there, watching her strike up conversations with friendly strangers in broken English with confidence. And when we crossed the street together, her iron grip around my wrist kept me close at her side. Her instinct to protect had always been strong.

In the 1980s my uncles served in the U.S. Coast Guard and their close-knit families established the first Filipino-American community organizations in the area. They lived on the same street in military-provided housing, caring for each other like one large, extended family. Lola Rosy would babysit the kids while their parents were working. At times a strict disciplinarian, she was also fiercely protective.

Every time my cousins and their other Asian friends rode bikes outside, a young white boy — whose father was also a Coast Guard member — taunted them with racial slurs like “chink” and “gook” as they wheeled by. Nothing they said or did ended the bullying. But when my grandmother found out about the harassment, she had a chat with that troublesome boy, machete in hand. He got so scared, he never said another word to my cousins again.

Lola was an expert with both the machete and the cleaver, able to split open coconuts and even butcher an entire cow by herself. She has long been one of the most sought-after cooks in our community, and was often commissioned to cater parties for local Filipino families. Though she never received formal training, she honed her talent through decades of practice.

As a young mother raising two daughters in Manila, it was difficult to feed everyone on her husband’s salary. During one of their toughest times, an injury kept my grandfather from working for many months. That Christmas they had only dried sardines to eat. A resourceful woman, she cooked food and sold it to hungry passerby in the street. Steaming cups of mung beans were stewed in chicken broth with pork and bitter melon leaves and served over rice, while her children handed out polvoron, a crumbly shortbread pressed into molds and wrapped in colorful cellophane.

Lola Rosy was no stranger to hardship. Her mother died when she and her nine siblings were very young, and she spent her teenage years under Imperial Japan’s invasion and occupation of the Philippine islands in the 1940s. Unlike other Filipinos, her family’s light skin and reddish-brown hair made them visible targets for violence. Afraid for their lives, they abandoned their home to hide in nearby hills, returning only at night for food. With the aid of neighbors, they managed to survive unscathed, but in the many years that followed my grandmother outlived all her siblings, wishing each brother and sister had been granted more time than she.

When her husband suddenly passed away in 1983, Lola Rosy became the emotional glue for our family as we tried to heal the aching gaps in our own lives. Though it was sometimes difficult to connect with her American-born grandkids, she would show her love for us in other ways. She was a constant fixture in each of our lives. She was the center of every holiday cheering us on at every sports game, performance, and graduation ceremony, pointing us out to those sitting next to her and beaming with pride.

Though she was a stay-at-home mom for most of her life, Lola made sure that it was anything but boring. She was a skilled mahjong player and loved to travel. Once she even took a train by herself across the country, to visit relatives in California. In her later years, she booked annual trips to the Philippines, taking balikbayan boxes stuffed with clothes, chocolates, and toiletries for family back home, and returning with suitcases full of candies, knick-knacks, and souvenirs for us. Though she was frugal in her own life, recycling cardboard boxes and glass jars and hoarding napkins from fast food restaurants, she spared no expense when giving to others.

Even when conditions like arthritis made it harder for her to move around, she continued to travel alone, and insisted on living independently until her health declined so much that she needed 24-hour care. This upcoming March, she would have been 92 years old. I miss celebrating with her.

In these challenging times, may we all channel Lola Rosy at her happiest: dancing in her sequined terno gown with its distinctive butterfly sleeves, surrounded by loved ones. Let us swing, joyfully, into the new year.