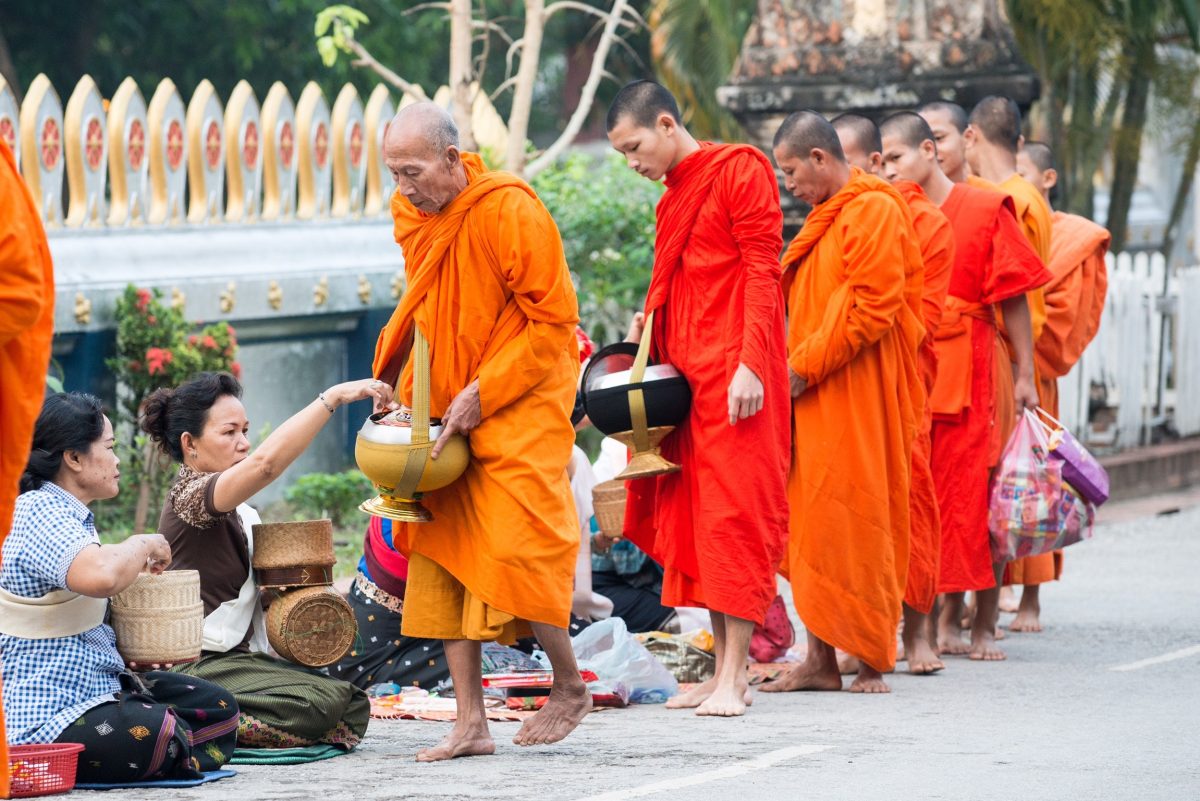 I sat down and asked Dr. Ariya Svetamra of the Women’s Studies Centre, Chiang Mai University, whether women have a place in Thailand’s Buddhism, and many other questions about Thai women’s relationship with Buddhism.

The average Buddhist is asked to follow a mere five precepts (rules which govern thoughts and behaviour), a challenge most human beings would fail miserably to meet during the course of one life, let alone multiple lifetimes. After all, many of us drink, lie and gossip, have helped ourselves to something not freely given, have probably enjoyed some sort of sexual impropriety (whatever that means in this day and age), and who hasn’t killed or harmed some living creature or another, be it just a mosquito?

Buddhist monks, on the other hand, are tasked with following a whopping 227 precepts; while bhikkhunis, or ordained women, are expected to follow a mind-bending 311 precepts; not only must they control their own desires, they also have the extra anxiety of making sure they don’t inadvertently arouse the desires of men.

Yet in spite of such prohibitive standards, should one of us ever aspire to become a bhikkhuni, the Thai sangha (order of ordained monks) has made it impossible to do so, forcing Thailand’s approximately 200 bhikkhunis to go across the pond to Sri Lanka for ordination; only to return to a country which doesn’t recognise, or support, them.

“I believe that for the most part Thai women are more active Buddhists throughout their lives than men,” claimed Dr. Ariya Svetamra, “It is women more than men who spend time at temples, who listen to the dharma, who meditate and pray. Yet women’s lowly position in Buddhism is glaringly obvious. The role of women within the temple compounds domestic gender roles—cooking, cleaning, laundry. In the past nuns were largely seen as women with problems such as heartbreak, homelessness or poverty. This meant that they had no negotiating power. Compare that with monks who have financial support from the sangha and their devotees to build, to educate, to license, to staff and to purchase.”

“If a middle- or higher-class woman goes to the temple then she is exempt from such duties because her class trumps her gender. This is an obvious legacy from India’s caste system of the days of, and following, the Buddha. Whereas a poor man can be ordained and rise in rank and power, nuns have nowhere to go within a temple hierarchy. That is one reason why many women want to be ordained. They want to practice dharma and receive the same recognition and support from the sangha and the general public, not to end up being domestic workers. Instead women who do become bhikkhunis have to work so much harder than their male counterparts to receive any respect, and often they even have to face insults and worse. I have seen monks with bowls overflowing with alms walking the same path as a bhikkhuni with an empty alms bowl. Some even say that they have encountered villagers shouting insults at them—after all, some people believe you get more karma from giving to a monk than to a nun, a bhikkhuni, or the needy. And many people doubt or are suspicious of the intentions of bhikkhunis.”

“I have studied Buddhism and I can tell you that many of these beliefs are not Buddhist,” insisted Dr. Ariya, “It’s animism, it’s local dogma, it’s Brahmanic cultural residues. It’s not the gods who talk this way; it’s always the men who run religions.” And, of course, the women who become the blind and self-defeating defenders and enforcers of the patriarchal exegesis.

The Sangha Supreme Council is the arbiter of all things Buddhism in this country. While in many areas the sangha can’t quite make up its mind; for instance, it can’t seem to bring itself to hold a position on the Buddhist persecution of Rohingyas in Myanmar; yet in other matters such as female ordination, it seems to have a very firm and finite opinion.

The reasoning du jour is that, traditionally—and we are talking nearly a millennia ago kind of tradition—five bhikkhunis were required to preside over the ordination of an aspiring bhikkhuni. And since the bhikkhuni line in Theravada Buddhism is believed to have died off sometime between the 11th and 13th centuries, following the destruction of Buddhism by an invading force in Sri Lanka, this is a conundrum the sangha claims is unsolvable. Never mind that the male sangha managed to rebuild itself from scratch, while admittedly the bhikkhunis never phoenixed out of those ashes. This obtuse position falls in line with the power of the patriarchy to define its own limits of power. Like most religions, there is ample room for interpretation, and through the centuries, the men have interpreted women so far out of the picture, we are clinging to the bottom of its frame!

“The good news is that for the first time in history the gender discourse in Buddhism is being discussed outside the sangha,” smiled Dr. Ariya, “TV programmes, blogs, YouTube videos and marginalised voices like ours are being heard; it’s no longer a top down dialogue. What I have found is that there are many career monks who are very innocent. They may have been ordained decades ago and frankly they are no longer of this world. So when they sit on their council seats to make decisions about women’s roles, and they are surrounded by conservative lobbyists, and they don’t understand modern issues or expectations, they are easily swayed. This is also why many bhikkhunis are not rushing this issue. They feel as though time will be their best ally.”

“You can’t judge a situation today without historical context,” explained Dr. Ariya, “Let’s look at the north of Thailand, where women traditionally had much stronger roles in Buddhism, acting as mediums and witchdoctors. It all changed with the rationalisation of Buddhism, which started during the reign of King Rama V. Before that time Lanna had about 30–40 sects of Buddhism, each tied to an ethnic group, which was often led by a charismatic kruba (a northern term equivalent to a Buddhist guru), but within these groups, there would often be a role for a strong or powerful woman.”

When Rama V created the sangha, he not only impacted how people worshiped, but their entire social structure. “Northern women always had more power than their central counterparts,” continued Dr. Ariya, “Men would move into their wives’ family compounds after marriage, denouncing their family spirit—phi pu ya—and embracing their wives’. Even virginity was seen as something one could lose without much ado; a small spiritual ceremony could bring back any negative spiritual effects of its loss. In the old days it was even possible for a poor old Lanna (Northern Thai) woman to shout and insult her lord, as long as she was being possessed with a spirit and acting as a medium. This power must have been very satisfying! In Bangkok, on the other hand, women were seen as property to be married and traded, their virginity safely guarded or purchased.”

As only men can become ordained, the burden now falls on sons to generate enough karma, through ordination, to propel their mothers to a superior next life. Sons traditionally spend one to three months as a monk and that is often seen as the greatest gift to his mother. Daughters on the other hand must cook, clean or marry into wealth to contribute—as is obvious by the number of Thai women who financially support their parents, often through whatever means necessary. As mothers cling onto their sons’ saffron robe-tails to collect their karmic credits, they perpetuate the sangha patriarchy.

“Patriarchy isn’t a person,” concluded Dr. Ariya, “it is an idea, a thought. It is inside us, not an outside force to battle. The way I see it is that feminism has come in waves, some more impactful than others. Most of the bhikkhunis today are not feminists, they are not here to fight or champion a cause. Maybe this is wrong, I don’t know. But perhaps western resistance may not work in the east. There are bhikkhunis who are slowly gaining ground and a following. And it isn’t because they are confrontational or aggressive, but they are simply doing the right thing. They believe that by doing that, others will eventually fight for them. This is a Buddhist belief.”

Whether bhikkhunis are accepted or not; they are here to stay. As Dr. Ariya explains, they emerged and they exist. They are witnessing and they are witnessed. Their strategy is to focus on dharma and by donating themselves to religion, by ignoring the noise of the sangha and badly behaved monks, by holding themselves accountable to higher standards, by proving their purity and hard work, they will—they hope—eventually gain trust, admiration … even respect.

But that is just 200 women. The rest of us who are still struggling to navigate our role within this patriarchal Buddhist society, many of whom are active and devout supporters of Buddhism, are beginning to question whether and how Buddhism supports us. I think this is a valid question, and I think soon there will be many more, and much louder, voices to join ours.

For a more detailed overview of the status of women in Thai Buddhism see the 2014 article Breaking Through Buddhism: Beyond the Dogma and Patriarchy at www.chiangmaicitylife.com.

(This article was originally published in Chang-Mai Citylife on January 1st, 2018. We republish it here as part of our collaboration with other media who share our vision of raising the voices of Asian women.)

Half Thai and half British, Pim has been running her tiny media empire in Chiang Mai since she left university over twenty years ago. She publishes a lifestyle magazine, Citylife, a food magazine, Spoon&Fork, an events guide, CityNow! and runs the website www.chiangmaicitylife.com which covers all topics Chiang Mai.