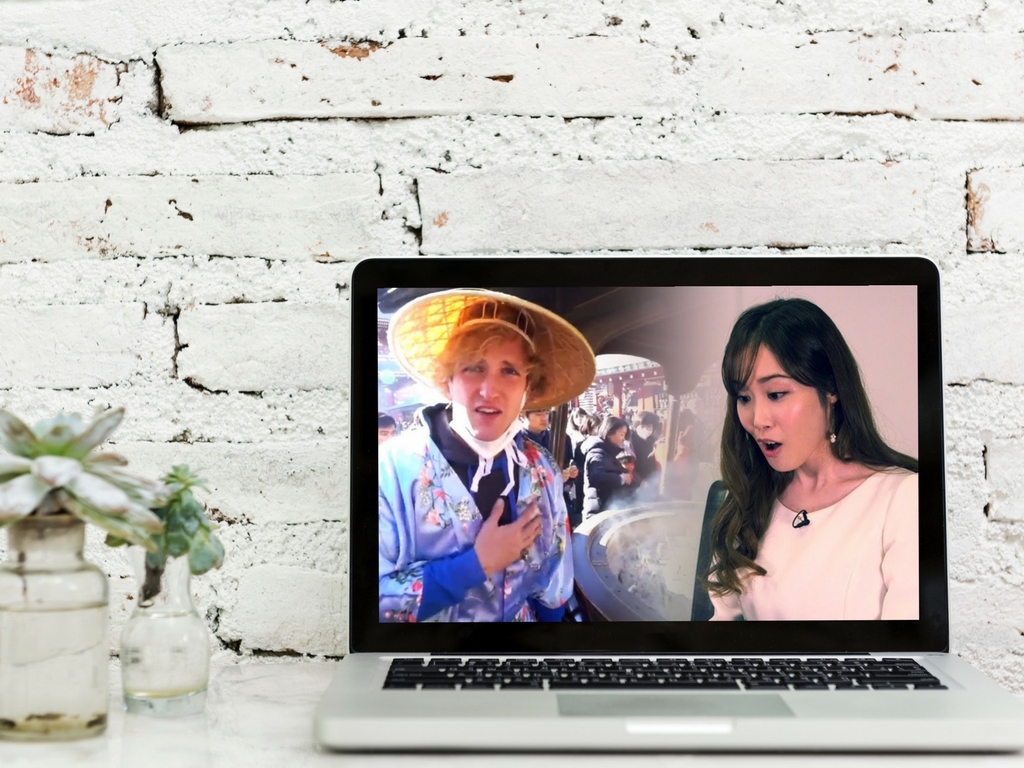 By now, we’ve likely all heard about Logan Paul and the infamous video that sparked a social media firestorm. In the now-deleted vlog, which was uploaded early this month, the 22-year-old vlogger filmed himself and his white friends as they walked through Japan’s Aokigahara forest, widely known to be a location where people go to take their own lives. Veering off-trail into a restricted part of the forest, the group stumbled upon the corpse of a man who recently committed suicide hanging from a tree. They crept even closer, panning between shots of their own nervous laughter and close-ups of the deceased, while cracking tasteless jokes about their unsettling discovery. The video, which Paul has since taken down, was entitled, “We found a dead body in the Japanese Suicide Forest” and featured a blurred image of the victim in the video’s thumbnail.

It would be all too easy to dismiss his behavior as an innocent mistake or single lapse in judgment. Instead, the footage reveals Paul and his cohorts treated the sacred site like a tourist destination in an attempt to capitalize on its tragic, “foreign mystique”. The vlogger insisted that he intended to focus on Aokigahara’s “haunted” quality in an effort to “raise awareness for suicide and suicide prevention,” hoping to capture or even fabricate a supernatural encounter with one of the many spirits of the deceased said to inhabit the forest. With little respect for or knowledge of Japanese culture and customs, Paul went through the trouble of planning out his content, filming it, editing the footage, and eventually uploading it for the world to see. At no part in this process did he or any member of his crew stop to consider whether or not it was appropriate to air.

Sadly, this was not an isolated incident. Previously released vlogs show the former Vine-star-turned-Youtuber cavorting around Tokyo with his friends, harassing locals while wearing conical straw hats and kimonos, and being as loud and obnoxious as humanly possible. He gleefully dunks a GoPro camera into a koi pond, leaves dead fish on the back of a taxi, and hurls plush Pokeball toys at passerby, policemen, and moving cars. “Tokyo is a real-life cartoon!” he exclaims for the camera. At one point, he even uses broken English to deride service workers. Nothing seems to be off-limits for the sake of more views. But why did it have to be Japan?

“Japanese people are so nice,” a smiling Logan claims in another vlog. Youtuber and Japanese native Yuta unravels this misconception, explaining that “Just because somebody does not yell at you and tell you to “get lost”…doesn’t mean they like you.” In fact, the clips show Japanese citizens glaring at him as he wreaks havoc and harasses those around him, and Japanese Twitter users censured the vlogger, saying “Shame on Logan Paul” and “What did Logan Paul come to Japan for? Truthfully, I want him to go home.” According to Yuta, Paul and his American friends are “taking advantage of the non-confrontational nature of Japanese culture.”

Logan Paul isn’t the first content creator to travel to Asia and commodify the suffering — real or imagined — of the people who live there. This past September, Nick Joseph and Dan Rue, the duo behind a popular comedy Youtube channel, filmed another video in Japan that recently resurfaced on social media. It featured the two American men mocking the Japanese language and kidnapping a Japanese girl from her family at a market, and was criticized for its striking similarities to Paul’s vlogs. In response, they dismissed viewer concerns, saying they didn’t “have time to argue” and claiming that the family consented to the staged kidnapping. Instead of an apology, they fell back on a familiar excuse: “it’s just a joke.”

But Internet celebrities aren’t the only ones who dehumanize Asians while traveling abroad. Last month, South Korean news outlets reported an increase in foreign men catcalling and even following Korean women. Racialized sexual stereotypes embolden these men to harass local women with unwanted attention. These men feel entitled to Asian women’s bodies and see us as nothing more than exotic, sexualized objects.

Whether these incidents occur in Tokyo or Seoul, they spring from the same underlying attitudes. All too often, Asian people of all ethnicities not perceived as equals to Westerners, thanks to Western media’s long tradition of reducing Asian cultures, languages, and bodies to props for entertainment. Unfortunately, new media influencers like Logan Paul reinforce these distorted portrayals, creating a negative feedback loop that exacerbates the issue. Additionally, Youtube employs a business model that rewards creators based on quantity of views rather than quality, which incentivizes the mass production of problematic content.

Paul has a net worth of about $15 million, and even more in dedicated fans. Coming from this place of wealth and privilege, this man is in a position to use his popularity for good. But instead, he chooses to abuse his power by degrading other cultures. His behavior is extreme, but whether he likes it or not, he acts as a representative of his people. As a content creator at the forefront of what has become a global platform, he has the social responsibility to be respectful to other cultures, especially when staying as a guest in a foreign country. With so many impressionable young fans who look up to him as a role model, he needs to be conscious of the influence he wields and must be held accountable for his actions.

And as Twitter user Kim Cruz said, ”If you have younger siblings/children/relatives, please make sure to guide them when it comes to idolizing the right people.” So as we disavow Logan Paul, we need to make sure that our support as consumers of media goes to people who seek to make a positive impact. Moving forward, let’s empower creators who actually care about our shared community, instead of those who squander their opportunities for selfish reasons.

Melodee Morita is a bilingual Japanese American vlogger and TV news reporter who creates informative and entertaining content that people of all ages can enjoy. Weylie Hoang is a Chinese American vlogger who makes lifestyle videos, gives girl advice, and makes videos that encourage young women to be comfortable in their own skin and be proud of who they are, saying “Pretend that I’m your sister.” Wong Fu Productions is an Asian American group of men and women working together to produce content that portrays Asians as actual people. They’ve created everything from comedy sketches to dramatic web series, their videos are family-friendly, and they’ve even made thoughtful short films in Cantonese and Japanese.

Only when we raise our own voice we can subdue the negative impact Logan Paul and what he represents caused in our media environment.