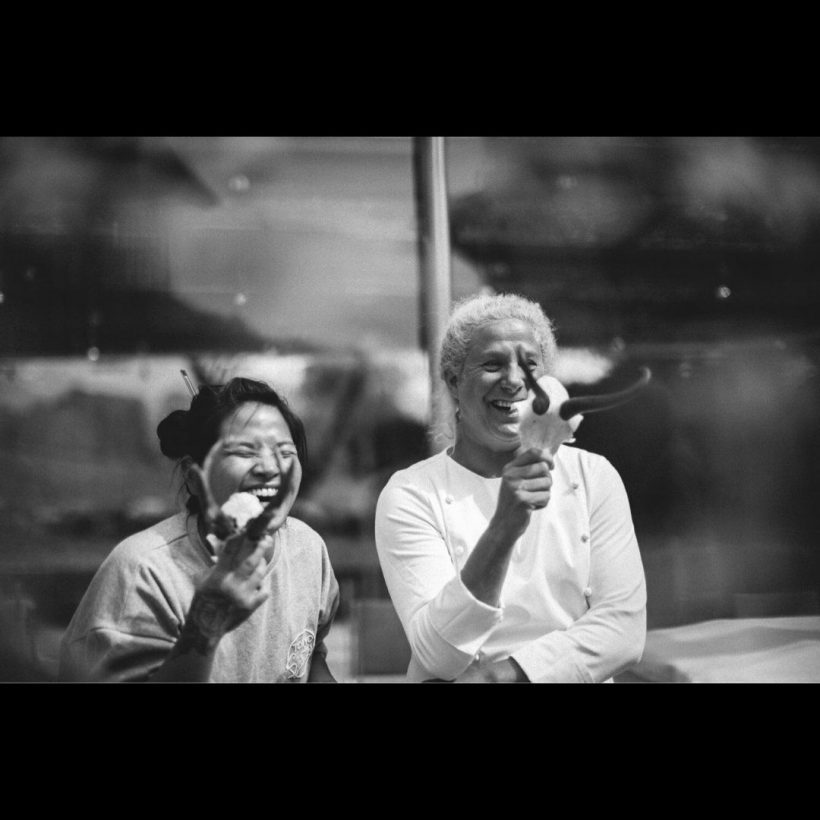 Meet Emily, a Korean-American Chef in the Slovenian Alps

Emily is a globe-trotting Korean-American chef I ran into in the village of Kobarid, in a tiny, jewel-like Alpine corner of Slovenia. Far away from a typical food capital of the world, she works as a sous-chef at the restaurant Hiša Franko, led by the chef Ana Roš, who happens to be the world’s best female chef. We met for a light lunch to chat, and the more we chatted, the clearer it became that her own story is amazing.

Editor: Could you briefly summarize your life path so far?

Emily: I studied music for most of my life, training to be a classical musician. My dream was to play in a ballet pit orchestra! I attended a boarding school for the arts and somewhere around my final year, I started to become anxious about where my life was going. I decided to drop out of school and move out.

Wow. So you went from musician to chef?

Oh, it wasn’t that simple. I was lost in the mess of many different odd jobs to pay the bills and I fell into the restaurant industry. It took years of serving, bussing tables and catering before I made it back into the kitchen.

How did you build your career in the kitchen then?

The first “cooking” job I ever had was at one of those “Mongolian grill” buffets. (laughs) People would come up with big bowls of raw meat and vegetables and I would cook them in front of them on a giant scorching flattop grill with two or three other guys. This was not a passion, it was a way to pay bills.

The first real kitchen job I had was prep-cooking at a steakhouse I was serving in. Cutting vegetables for stock and peeling potatoes, simple stuff. The first real thing I learned to make was spaetzle [a kind of soft egg noodle found in southern Germanic cuisines -Ed.]. I remember being pretty terrible at it, but I really loved being in the kitchen.

You mentioned that you are a Korean adoptee. How do you think that childhood experience has affected your career?

I get asked this question a lot but I never know how to answer it. It’s always a bit strange for me to try to explain how being an adoptee affects any part of my life because it’s all I know. I’m not really sure what aspects of my career or life would be different if I were or were not adopted.

I will say this, though: I love coming from two different countries. I love them both. Especially as a chef, I love the cuisines from both places.

You didn’t stay a prep cook, however. You ended up living and working outside the US as well.

There was the Alinea in Chicago. Then The Nomad Hotel in New York. After that, I left the States and worked at the Maaemo in Oslo, Norway. There were also the internships at La Bouitte in St. Martin de Belleville, France, and at the Nihonyori Ryugin in Tokyo, Japan.

And now you’re working at Hiša Franko in Staro Selo, a small village in Slovenia. How is it different from previous environments you’ve worked in?

Though I have worked in the countryside before, there is something so pure about living in Slovenia. You can drink directly from the Soča river. It’s insane!

In today’s world where everything is so processed and overly packaged, here is a place where the people are so conscientious about their environment that it is so unpolluted that you can actually drink straight from the river. This absolutely shows in all the products we use, from our vegetables to our fish and meat. We are very lucky about that.

However, the valley can feel quite secluded sometimes, that’s definitely a con for me. Also, there can be a bit of a more traditional mindset here. That is something that is difficult for me to absorb.

What’s it like to work for the world’s most famous female chef? What are the pros & cons?

I came to work for Ana right before all the media chaos started, before the Netflix Chef’s Table episode came out. It was also before she was named best female chef of the year. So the Ana I work for is still the Ana who personally responded to my application and cooked lunch for her staff several times a week. Things have changed now because they’ve had to, but I definitely still consider myself lucky to work for Ana, whether or not she’s a famous chef.

Since the award, I have noticed one interesting change: the different shades in all the talk about gender equality. Much of inequality is so ingrained in us culturally and the prejudice is often very subtle and nuanced, which can make it so difficult to pinpoint. Since Ana won the award, many people have liked to project their own agendas on her, and on to what we do at Hiša Franko. Don’t get me wrong, I am so proud to be living in a time where the conversation on gender equality is at the forefront. But I also know that for so many people feminism is synonymous with man-hating, which is not the answer.

Ana is not a man-hater, however, and just because she has a female sous chef does not mean we are trying to make a statement about gender inequality. We have plenty of men and plenty of women who work at Hiša Franko, and we all work along wonderfully.

(laughs) Yes, I genuinely love to cook. That was something I had forgotten about for a long time before I started working for Ana. I love the organization of it. I love making lists and keeping things organized. I also just simply love the act of cooking. I find it very comforting to be in the kitchen.

What is one dish you like most in the world?

It’s soup. I know that sounds ridiculous, but it’s true. Even on a 30-degree day you can see me in the corner of the kitchen slurping down a steaming hot bowl of tom yum or tortellini en brodo.

What’s your dream as a chef?

As I’ve gotten older my dreams have become a lot more practical.

I want to work in a restaurant with ethical practices and a manageable carbon footprint. I want to work where people are actually sufficiently happy to stand in front of the stove day in and day out, where I can sit down for at least one meal a day and get a little jog in the morning before work.

I don’t have long-term dreams because you never really know where life is going to take you. Three years ago I never would have imagined I’d be living in Slovenia. Until last year I was convinced I would leave this industry.

The best piece of advice I’ve ever received was to find a good fit.

When you’re a young cook it’s so easy to be swept up into the glamorous life restaurants tend to portray. Top restaurants’ and chefs’ Instagram profiles portray smiling cooks in perfectly clean uniforms, staged photos of awesome ingredients, trips to exotic places and wonderful meals.

But at the end of the day, working in restaurants is a hard business, and when you strip it down to bare bones, it’s more humbling than glamorous. If you’re not cooking in a place that you love, for someone you believe in and with people whose company you genuinely enjoy, then you will burn yourself out just trying to fake it.

Thank you, Emily. It’s been a pleasure talking with you.