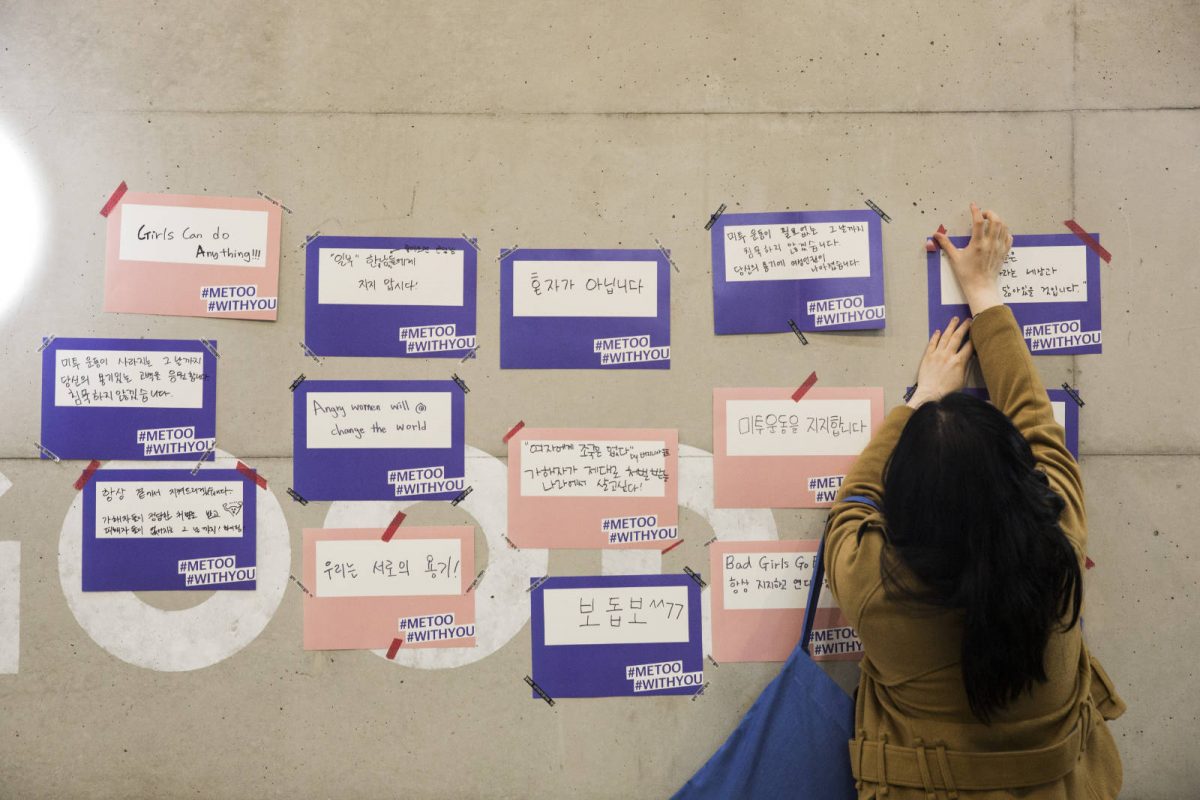 The 2018 International Women’s Day celebrations drew the highest participation yet in South Korea as the #MeToo movement swept across every sector of this male-dominated society.

On March 8, Korean women’s organizations of old and new, including the Korean Women’s Association United, Korean Women Workers Association, Femidangdang and FireFemiAction, celebrated the annual event all across the city in Gwanghwamun, Myeong-dong, Hongdae and Seongsu-dong.

The Women Workers Association organized the “Stop Work at 3” strike as a way to protest the pay gap in central Seoul. South Korea ranks dead last among OECD countries, with the largest gender pay gap of any member country. The average South Korea woman makes only 64 cents to every $1 a Korean man makes for the same work. In terms of the 9-to-5 working day, that is the equivalent of every Korean woman working for free after 3 p.m., day in and day out.

Younger groups from the social startup communities organized a “Why Not” festival hosted by the WildBlankProject and WeConnect in eastern Seoul. A wide range of working women, from CEOs to activists to comedians to novelists, celebrated the day in a festive mood while sharing their stories at panel talks with topics such as “Why Not raise a feminist issue at work?”, “Why Not led a mom to do many things?” and “Why Not led a woman be funny?”

Whether protesting or celebrating, many participants talked about the recent #MeToo movement that has shaken up every part of this society, from the government’s legal branch and high politics to art and academia, business and religion.

“These have been grueling months, as new #MeToo revelations come out every day,” said Hong Jinah, co-founder of WildBlankProject, a social entrepreneur group, “I’ve been running by the Han River every day and I would roar while running just to let off some steam.”

One of the most powerful Korean politicians, Ahn Hee-jung, is currently under investigation by the prosecutor’s office as one of his female aides, Kim Ji-eun, revealed last Tuesday that she has been repeatedly raped by Ahn since last year. Ahn resigned from his post, and his campaign team, which has been shattered, released a statement to fully support Kim Ji-eun and potentially other victims.

A famous Korean poet, Ko Un, who has been nominated for the Nobel prize in literature, also faced the consequences of numerous sexual harassment allegations, first accused by female writer Choi Young-Mi in her poem “Beast”. Ko’s work will be stripped off honorary titles and removed from national textbooks.

And there are so many more high profile males, whether famous actor or renowned professor or musician, going through similar downfalls.

“It’s important to note that the #MeToo campaigns from Hollywood and the brave revelations of Seo Ji-hyun may have been a tipping point in the rise of the #MeToo movement in Korea, although they are not the only causes,” said Lee Na-young, a sociology professor at Chung Ang University in Seoul, during a press conference organized by the Korean Women’s Association United.

The first #MeToo case was triggered by prosecutor Seo Ji-hyun, who exposed her colleague who had sexually harassed her in public eight years ago. When she reported it internally, she faced only criticism and was even transferred to an undesirable position in a remote region of the country.

Even before #MeToo, a local hashtag campaign called, #SexualViolence_In_XYZ had emerged, where women from different industries shared their personal stories. But this time, the repercussions of the #MeToo revelations have had a more powerful impact in toppling the predators.

Additionally, Prof. Lee of Chung Ang University laid out a “special context” behind the Korean women who joined the #MeToo campaigns: they’re the digital-native millennials who were raised in both neoliberalism and a patriarchal society. In other words, they were taught to have a stronger sense of independence and individualism, but in the real-world they still face misogyny and sexual violence, thus leading them to express anger and resistance.

And these young millennial women expressed their voices in empowering sessions like the Why Not Festival.

“As we shared our own stories to cope with #MeToo and the aftermath, I feel more energized and hopeful that we can live better lives as we come together,” organizer Hong said after the festival.