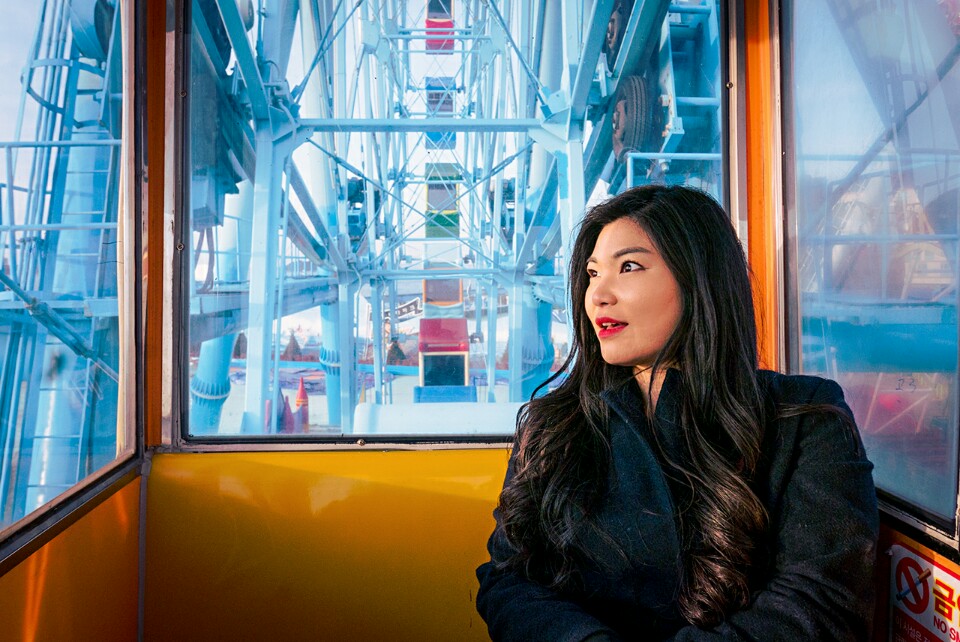 Lee Jihee is better known by her nickname and stage name “Matt돼지” (wild boar) in Korea. She is also the popular podcast host of “영혼의 노숙자” (Homeless Soul), which has hit number one on local podcast charts.

Before this she hosted another podcast, “독일언니들” (German Sisters), with her childhood friend nicknamed Drama Queen. In her shows Jihee talks freely with her guests about various topics, from sex and pornography to sexual health and aging, and manages to bring lots of laughs to the table. She was first inspired by a local podcast hosted by two female comedians, Song Eun-yi and Kim Sook.

Jihee aspires to do a standup comedy show, which is not so common in Korea, not to mention a female standup comedian. She enjoys the work of Yoo Byung-jae, one of the few successful Korean standup comedians, who now stars in the show “Too Much Information” on Netflix. She also liked Louis C.K., though she was disappointed to see him admit to serial sexual misconduct in the midst of #MeToo allegations.

Her ultimate role model, however, is Tina Fey: she wants to write sketches and TV series, and also play in them. For now, Jihee is practicing a standup performance in front of her podcast fans as she organizes regular meet-ups.

As the #MeToo movement is gaining momentum in Korea, we decided to talk about “sexual consent”, a topic people don’t talk about too openly, which makes it a perfect subject for Jihee.

Yewon: On your podcast it was refreshing to hear you talking with humor about taboo subjects regarding sex.

Right, there are a few female sex columnists, serious ones, but I haven’t seen a platform for women to talk about sex in a light way.

Speaking of sex, how do we talk about consent in a relationship? And how would you draw the line between harassment and just an uncomfortable situation?

For both women and men, but especially men, it is important to accept one’s ‘no’. Sometimes men falsely assume that women saying ‘no’ on the surface means ‘yes’ in reality. Men should be ready to accept that ‘no’ means ‘no’, and women should learn to state their opinions affirmatively.

As women we never learned how to say, ‘No,’ affirmatively. But just because we don’t say no, taking that as a ‘Yes’ is a problem. It is socially taught for women to be more understanding, more compassionate and more smiling [than men], so we should take this context into account when we explore why it’s not easy for women to say no.

There’s also a stereotype that if women come on ‘too strongly’, it is a turn-off for men, whereas men, who are aggressive and persistent with their moves, are praised as the so-called, ’Sang-namja’ (Naturally manly man).

I really feel disgusted with that term, ‘Sang-namja.’ I personally cannot stand a man who over-emphasizes his masculinity. I’d rather be comfortable with the ‘herbivore men.’ But it’s a different story in bed. Is this the time to transition from day-talk to night-talk? (laughs)

Anyway, I once dated a guy who only waited for me to do all the action in bed. It was suffocating for me. I guess I’m pretty comfortable taking the lead when having sex, but that wouldn’t always be the case with others. As long as you feel comfortable with talking about what you want with your partner, that’s important.

How would you communicate what you want in bed without killing the mood?

I don’t think it’s such a mood killer. I think it can actually be an arousal factor for a man, too.

I often say that it’s important for women to know their bodies so they can say what they want, what feels good for them. Then, they can say it aloud more easily. Of course, I wouldn’t scream out loud in the middle of the sex, “No, not like that!” (laughs)

I would say things softly about what feels good. It’s important to make a positive reaction to the partners. Men also feel satisfied when they get affirmation from women in bed. It’s arousing for men to see their partners getting aroused.

But there are certain men who don’t get the signals, assuming that the way they’ve always done things is always the right way.

It reminds me of a joke: the reason that men prefer virgins is because they cannot tell the difference between good and bad sex. Bad joke (laughs).

There’s also the fact that women tend to be extra caring by putting the other person’s pleasure over their own.

Right. Men never fake orgasms. The majority of women, I’m sure, have the experience of faking it and men not realizing it.

On a different note, I have this experience: my longtime boyfriend asked me to do something in bed that I didn’t feel comfortable with, so I firmly said no. Then he said to me, ‘do you not love me? If you love me, why won’t you do it for me?’ Because I didn’t do him a favor he tried to question my love for him! It was his trick to make me do the things that he wanted. I was deeply hurt at that time.

Do you think it was a trick or that he really believed it?

It was a trick. I think it has to do with the sense of entitlement, thinking that this woman is ‘mine’. It is related to this distorted view that when a man tells his girlfriend what to wear and not to wear, it’s considered an expression of love and care.

I also have a personal experience with this. My first love, which was tragic, I want to believe that’s a universal fact. (laughs)

I dated this guy for more than four years, but he always criticized my appearance. He would say things like, ‘You look nice today but you seem to have gained weight. I’ll pay for your fitness pass.’ Or, ‘Your skin looks bad, let me take care of that for you.’ My self-esteem got so low from that relationship. Thankfully, I was able to recover when I later moved to Germany. During my time there none of my friends and boyfriends, not once, commented about my appearance. Not even on a day when I had the biggest pimple on my nose!

That’s all I had for today. Thank you for talking with us, and best of luck with your standup comedy.

Thank you, I enjoyed it.