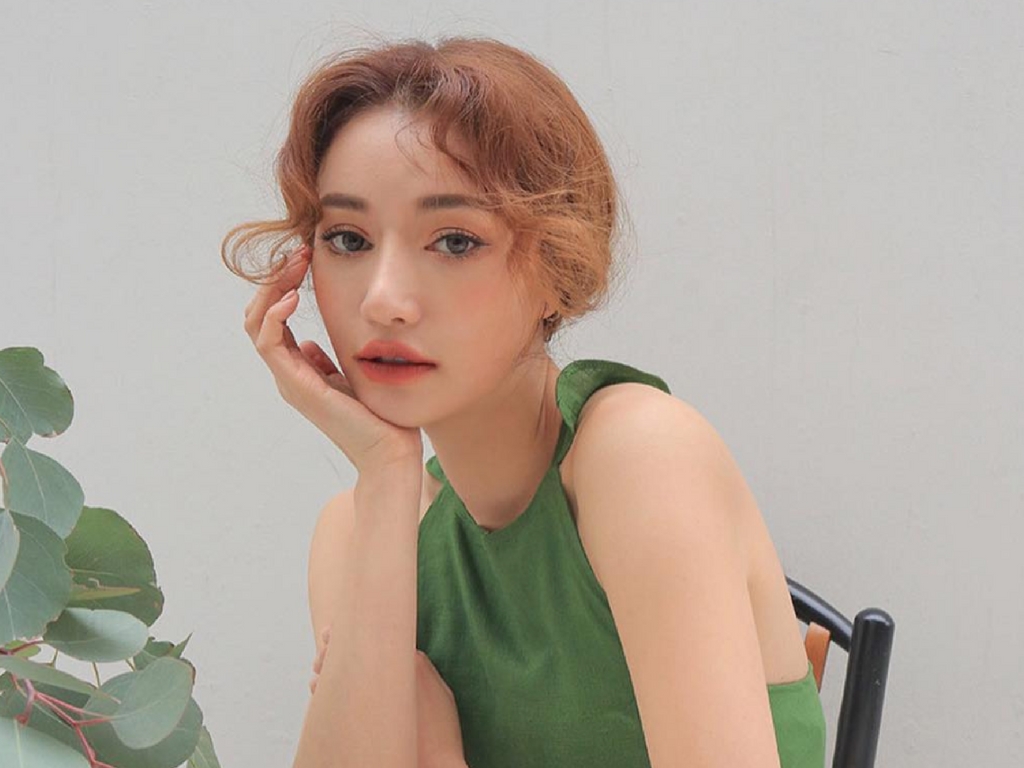 It just takes time to shed the guilt of liking pretty stuff: soft flowers, the color pink, and all the so-called girly stuff you feel obliged to reject, or at least be indifferent to, as a strong independent millennial woman. However, it’s not binary. We may like both, September and April. We can be both: soft and strong, girly and mature, independent and lonely, black and pink—wait, isn’t there a girl group called … oh, that’s why!

Here I share my inspiration board for this lovely month of April, hoping it brightens your day, too.

Was it Kate Spade who said that pink and grey go together? Doesn’t matter. Ms. Margaret Zhang proved it.

Great icebreaker for an office lounge: “Have you seen these lamps?” “I thought they were bells!”

There’s a fine line between a sophisticated monochrome look and your grandma’s drapes. Ms. Khue Tran is definitely on the safe side.

I know of Irene Kim, but not much yet. I cannot tell her personal style from other Instagram fashionistas, her hair color from other pink-haired ladies. But there’s something about her photos capturing your attention, and this one was just a work of art. Looking through her feed, I thought hers was consistently well put together, with good color schemes and great composure. Then I noticed her face. This woman looks confident, no matter where she is, no matter who she’s with. If that’s the influence she’s influencing as an influencer, I’m for it.

Lots of fashion shoots try to imitate classic western artworks. You know, the portrait of an aristocratic lady. Few, however, succeed so effortlessly as this one.

For style inspiration, Art Basel Hong Kong beats lots of fashion shows and interior design fairs. It is the proud proof of the practical function of fine art: for the art business, for the image of Hong Kong, for all the Insagrammers, and for all the visitors who will go back to their walks of life with a renewed love of art. For me, this picture just gave me the idea of the next Lego building I’ll make.

Art Basel Hong Kong exploded the Instagram feed of every fashion blogger who was there. You just cannot get better background color, composition, and a sorry-you’re-not-here vibe than this. And one blogger I was genuinely curious about was Susie Bubble. She blows my mind every time she dresses. Period.

This is one house party I won’t feel out of place! I couldn’t read the Thai caption, but one thing was abundantly clear. Great scarf, ma’am.

If you have watched more Hollywood films than Chinese films, like I have, chances are you know Fan Bingbing, but only as a most popular token Asian actress wooed by mega studios when they want to woo the Chinese market. If you know a movie where I can see her great acting skill and talent, please do let me know. Meanwhile, there’s no doubt that she’s impeccably beautiful in the traditional sense. When I saw this picture, the first thing in my mind was ‘Disney Princess!’ and a little girl in me was so awe-struck that adult me couldn’t come up with any joke.

Recently, Vogue Magazine introduced Elfira Loy as ‘Malaysia’s Answer to Selena Gomez.’ I know less about Elfira Loy than about Selena Gomez, which means close to zero (shameful as a longtime Disney fan), but Ms. Loy is fast becoming one of my favorite fashionistas. Her Instagram wardrobe is so powerful, it feels flatly ironic to call modest fashion. Ah, she’s the one in the middle.

Who’s Ms. Meghan Markle? Ah, that sassy actress in that American TV drama. The one who’s getting married to that British prince, you know, the one with red hair. I don’t have any special affection towards the British royal family (they don’t let me play on their lawn), but something tells me that this lady will be my favorite one.

Even with my limited experience of luxury hotels, I don’t feel reluctant to say that Mandarin Oriental Bangkok is my favorite hotel in the world. The service, the scent, the flower decoration in the lobby. Imagine getting their legendary spa on a sunny afternoon, away from the hustle and bustle of metropolitan Bangkok. Now, snap out of your imagination and get back to work, to afford said spa.

As far as I’ve witnessed, this is the only look you can wear red eyeshadow with in the office. Matching the color with your sophisticated blouse, how smart! Still, it won’t repel that one colleague awkwardly asking you which tearjerker you have seen last night.

If I walked out dressed like that, my mom would drag me back and ground me no matter how old I am. At least in my imagination. But I admire your attitude, Ms. Kiko Mizuhara. You do you, girl.