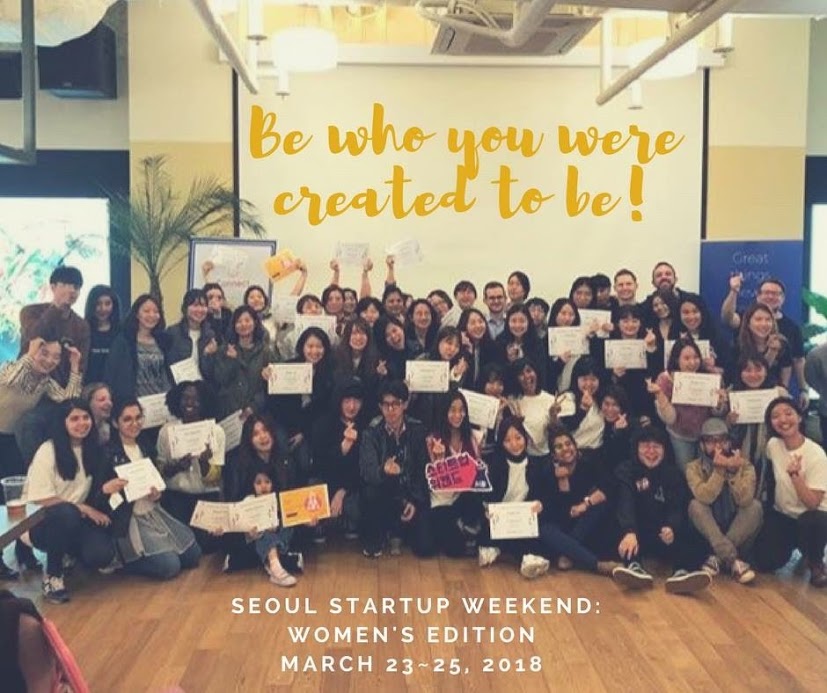 Startup Weekend Seoul : Women was a 54-hour hackathon that kicked off on March 23 at WeWork in Samseong-dong. Staff in T-shirts with the slogan, “Be who you were created to be,” welcomed the 42 aspiring entrepreneurs eager to join the weekend cram courses that would take them from ideation to development, and to the final demo day presentation.

Another sign at the entrance read: “Great things never came from comfort zones.”

Startup Weekend is a global initiative by startup accelerator Techstars, sponsored by Google Entrepreneurs. Although it’s the usual hackathon scene, crowded with young males, something was different this time. It was women standing before the judges, introducing themselves as founders, and pitching their business ideas. Nearly 96 percent of the participants at the Startup Weekend: Women Edition were women.

“We wanted to provide a space for all talented women with great ideas, but who haven’t taken the action,” said Lee Songyi, the Seoul community leader of the Startup Weekend, who introduced herself as a life-time zentrepreneur and full-time nomad.

“Of course, the event is not exclusive to only women, but we tried to flip the stereotypical roles that women and men played. That’s why in the Women Edition, women will take the lead and men will support them.”

Participants said the weekend brought together not only women, but also men of different ages, backgrounds and interests.

“Women’s issues are not exclusively women’s issues. They are a part of all of us—whether as the affected, the perpetrators, the enforcers, the bystanders, or the clueless,” Zahin Faizah Hussain wrote on Medium, after participating at the event. She was the team leader of DigiMom, who created an app to help women manage their post-maternal careers.

“I watched the facilitator bend down and hand the mic to a 4-year-old girl when it was her turn around the circle. I saw an established startup CEO hand his business card to a high school student and ask him to talk about the role of a developer. I listened to the seamless translation between Korean and English, so that ideas could be communicated with intention and clarity. If we choose to tune in, small actions can change the discourse.”

A team of a mother and a 4-year-old daughter, TRIPLE won the Women Award. TRIPLE offers an app that designs matching clothing for a mom and a daughter, for sisters, and even for a girl and her favorite doll. Another winner, “Damgo Biugo” (“Add and Subtract” in rough translation), is a sleek app by a group of three Korean women that helps users declutter their homes.

“I was so proud to see how many participants went from pitching their idea in Korean on Friday, to boldly pitching it in English on Sunday. Their transformation over the weekend was profound,” said Lalitha Wemel, a regional manager of Asia Pacific at Techstars, who was one of the judges at the Seoul event.

Great things may not be born in comfort zones, but safe and inclusive zones like the Startup Weekend Seoul : Women certainly seem to help good ideas enter the world.