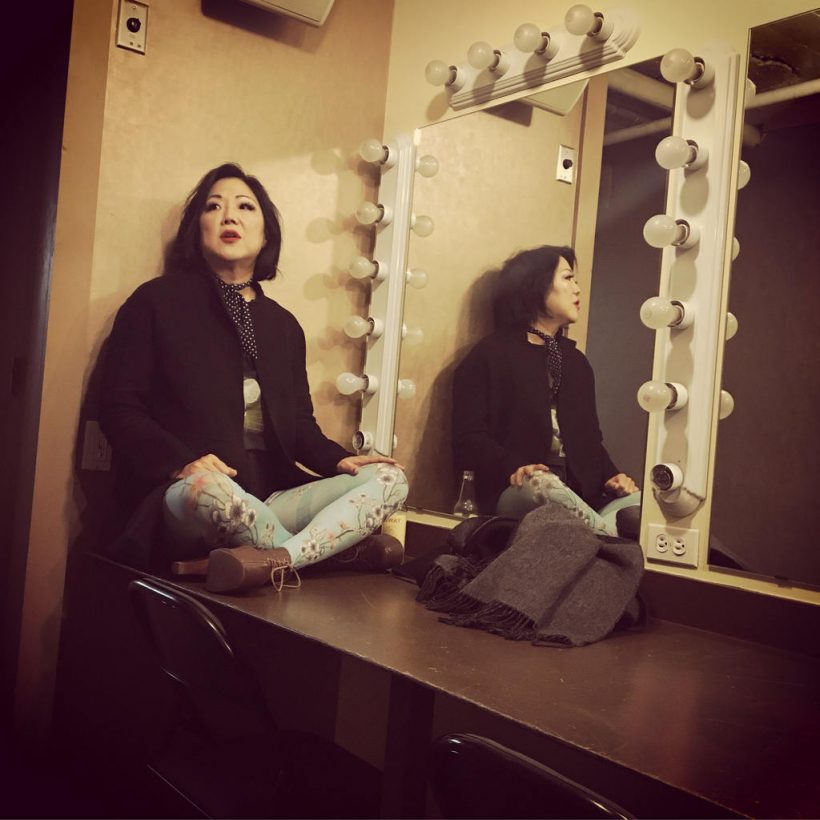 The multifaceted celebrity Margaret Cho—a comedian, actress, writer, and many other things—is now one of the most successful Asian-Americans in Hollywood. The feminist activist and artist continuously succeeds in re-contextualizing social and political issues as material for her on-stage comedy. It is a hectic job, making people enjoy themselves and have a good laugh while inspiring them with #woke messages, but she does it very well.

She has always made headlines as she talks frankly about all the ‘ism’s’ you could think of: racism, sexism, feminism, and the rest. Ironically, she does a fantastic balancing act, bridging the gap between her career and her personal positions.

Now that she’s on a tour of Asia with her standup comedy show titled, “Fresh Off the Bloat,” I reached out to chat with her about the future of stand-up comedy, her tour and upcoming shows, the controversies, and hosting an exclusive dinner party.

Marj: You’ve had an accelerated career path to where you are today, taking entertainment by storm. Has there been a moment that made you stand back and say to yourself, “I can’t believe that just happened!?”

Margaret: I think in general I have the feeling like I can’t believe any of it has happened! It is all very exciting and I still feel like it is a dream. Although it is a very long and recurring dream lasting 35 years!

Stand-up comedy today is very much more alive than ever, what do you find most exciting about what’s happening now and the future of it?

The way the media shifts and grows with technology is really what dictates the way we view comedy now. And this is what is the most exciting to me! There are so many ways to be a comedian.

You’re currently on tour with your show, Fresh Off the Bloat. It’s exciting times! Can give us a little preview of your material?

It is amazing that you share your personal experiences and use them creatively in your art form. Do you emotionally distance yourself from it or is this all part of your healing?

It’s all part of the transformation that we go through as artists in making art. So yes, it is healing, but it is also what I do, so often it has less of a charge. I think that personal stories really make comedy funny. You have to experience it to know how to discuss it and make jokes about it.

Do you think it’s important for all comedians to have materials that have real depth to them, such as touching on social and political issues, as you do on rape culture, sexism and whitewashing? And is there a barrier to tackling these?

It’s very important to talk about these issues and comedy is the best place to do so. I think it is responsible for changing the world and I am so grateful to be able to participate in this global shift.

The diversity of Asian-American stand-up comics today is growing fast. Back when you were starting, who were you influenced by?

There were not a lot of Asian-American performers when I was starting out, so I just had to make my own way. I was influenced by many people like Joan Rivers and Robin Williams, and I continue to get a lot of inspiration from them!

Since your last show in New Jersey (*in which Cho sparred with an audience who got upset because of her jokes about being the victim of sexual abuse), and your do-over show with Jerry Seinfeld, you’ve sparked really interesting discussions and helped bring your material and topics into the public eye. What was the whole experience like?

This was great and I love Jerry Seinfeld. He helped me so much and has always been there for me in my work and throughout my life. This was the best way to approach a difficult situation and I am so grateful to know him and to have made a real event at that club.

I read an article on the controversy over the exchanges you had with Tilda Swinton on “whitewashing” and to quote you—“It was interesting and funny because you can’t justify taking the role of an Asian person and trying to pretend to look Asian.” Whitewashing is something you actively speak of, why is that responsibility important to you?

Just because I have been trying to be in movies and TV for almost four decades and have so few roles to choose from. As an Asian-American that loses out on roles because of whitewashing, it is terrible!

All right, now I’d like to ask a few quick-fire questions for fun. What was your first job before you became successful?

I was a short order cook!

What was the first stand-up show you attended and how did you enjoy it?

It was a show where Ellen Degeneres was the MC, and I don’t even remember who else was on the bill. She made a lasting impression. This must have been in 1983!

Lastly, if you were to host an exclusive dinner party, and could invite anyone alive or deceased, who would you ask?

Joan Rivers because I miss her. Shakespeare just because. And PSY because why not?

In my conversation with Margaret, I was inspired by both her strong sense of ambition and lyrical frankness. She examines honesty in her craft and believes technology has created an entirely different world for artists, particularly for the comics of this era. There’s always going to be a groping for emotional and intellectual clarity with her works, which sets her apart from most of her comic contemporaries.