#padthaigate: What Thai Food Means in the Dreams of the Diaspora 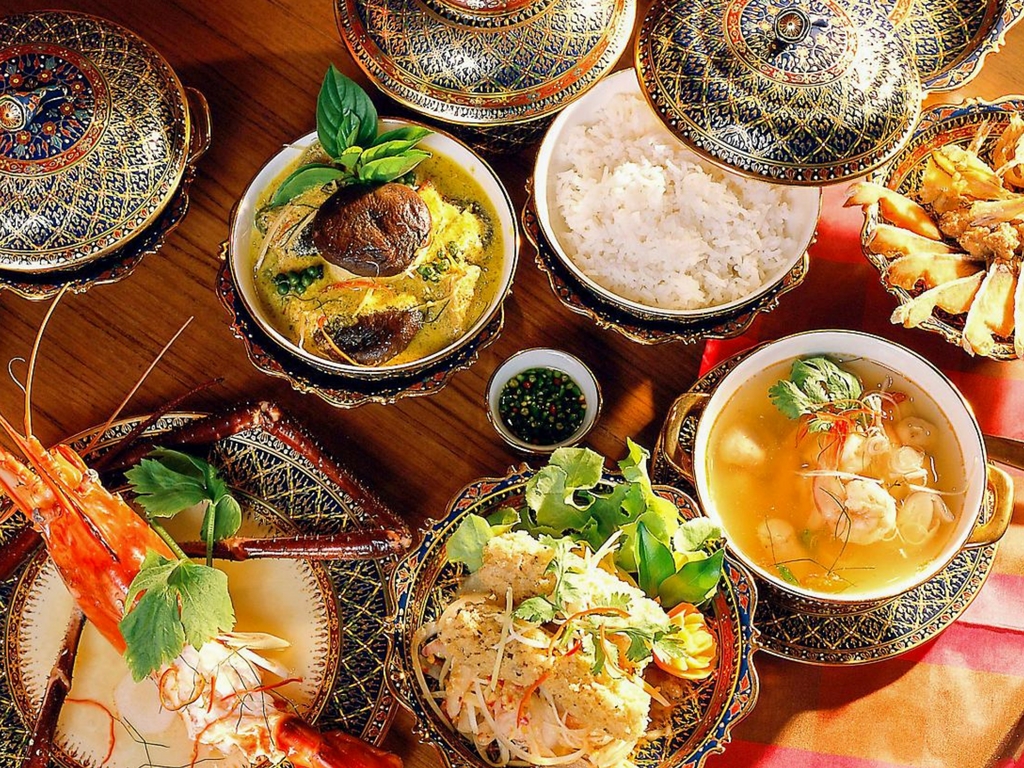 Songkran is the Thai New Year and it is held every April 13. It is when we honor the elderly and symbolically wash away dukkha (misery, suffering), and when we tum boon (make merits) by practicing generosity and selfless giving. Though it’s not like my childhood in Thailand, with smiling locals splashing us on my dad’s motorcycle, it rained that day in Oregon, and to me that was auspicious.

At the Thai temple this April members shared potluck meals before giving water blessings to the monks.

This giving reminded me of stopping by a Thai food cart. The owner asked me what type of food I liked, and I replied, “Northern Thai.”

Moments later, the auntie re-appeared holding dishes not listed on the menu: laarb (a meat salad) with mint garnish for me, and gaang som (a central Thai turmeric-filled fish soup) for her. It was her treat. United by jasmine rice, we ate at the picnic table. As she tasted the laarb her eyes squeezed shut and she gasped, “sour!” while I drizzled another lime over my plate. That was when I realized our palettes were different, and marked by our origins. Thai food to me is not just comfort food, it is ancestral.

My relationship to Thai food is intimate and emotionally-charged, especially after growing up poor in 1990s Chicago and experiencing food scarcity. It is more than recipes, peanut sauce, and culinary tourism: it encompasses class, migration, diaspora members finding each other, and ancestral memory.

Leela Punyaratabandhu, author of She Simmers and Simple Thai Food,  describes two major rules and one exception when it comes to Thai flavors. First, “salinity is derived from fish sauce; sweetness from palm or coconut sugar; sourness from locally-available tropical fruits.” Second, there is kreung tam (a paste) built into every cooking technique. Third, except soups, which are meant to be like tea infusions.

Last week an old video of Gordon Ramsay’s Pad Thai being rejected by Chef Chang of Blue Elephant. In the video, Chang stops mid chew to ask, “What do you want to know from me?” He then declares, “This is not Pad Thai.”

I can’t speak for all Thais, as we’re not monolithic, but when you taste something like dukkha (misery) you immediately know. “The Colonizer’s Noodle” memes and click baits poured in, though I wished for more Thai perspectives. What made that Pad Thai inauthentic? Especially when provided with all the correct ingredients?

Well, ingredients like banana blossoms and tamarind pulp can’t save a dish by themselves. In her 5-part series on Pad Thai, Leela meticulously details not only the 19 ingredients, but also the wok size, noodles, sauce, and “the way.”

The Visibility of the Authentic

Early migrants opening Thai restaurants in new countries often had to sacrifice flavor and prices to fit a local, Western palate. They faced a lack of fresh and imported ingredients, and made up for it with frozen food and broccoli.

Later, from the early 2000s, gastrodiplomacy was developed by the Thai government to promote Thailand, Thai tourism and agriculture. They trained Thai chefs in “prototypical” Thai dishes, taught how to adapt them to local tastes, provided soft loans for restaurants, and created three “levels” of restaurant, from fast casual to fine dining, equipped with ready menus and designs for the enterprising Thai chef.

The official representation of Thai cuisine is often royalist or aristocratic. Historical culinary literature is often elitist, and fusions are the antithesis of that Thai food. How can one Thai cuisine, located at a certain historical or regional point, be less than another?

There have been countless articles and think pieces written about cultural appropriation and food adventuring rooted in Western colonialism. From Michael Twitty’s (Black Food Historian) nitty-gritty take on Southern food to Soleil Ho’s essay Craving the Other, to BBC’s Megha Mohan tackling racist stereotypes in photography to Quincy’s breakdown of Pok Pok’s mediocrity.

My stance on Thai and farang (non-Thai) chefs is this: there’s no comparison. They shouldn’t even be graded on the same scale.

A Western chef’s rendition of “authentic Thailand” becomes more of a fantasy world re-enactment of their culinary tourism. They go on glamorous backpacking adventures, then claim that immigrant foods diluted to fit their new countries are inferior. Suddenly they are possessed of a manifest destiny to bring back “the real deal” from their vacations. They stand on the backs of immigrants who broke ground with their traditional cuisines in prior decades. Some of the bravest open their food cart in Los Angeles, with its Thai town and the largest Thai population outside of Asia.

Non-Thai chefs’ methodology will differ, because they lack the intimate context of Thai food. They usually replicate Thai culture as ornamental kitsch, which is why they often do not pass the #padthaigate challenge. They are the immigrants attempting to learn the new language of Thai cuisine, and sometimes their foreign accents stick.

Thai chefs are direct cultural participants, not a tourist-turned-local. They have an intimate connection to the cuisine: family memories, religious practices (tum boon, temple food), and diaspora experiences.

Our food is an inheritance, every jasmine rice loaded with memories and dreams. But when we see a foreign chef simply grab Thai food and make it their own, that assimilation stabs us with the pain of disconnection, erasure, and loss.

At the temple, I saw mountains of sticky rice; pots of Palo Moo (egg-pork stew); Laarb with various meats; Kanom Jeen (fish curry noodle); and an uncle pounding fresh som tom phu (crab papaya salad) in the corner. There was no pad thai.

And yet, everything was irreplicable, priceless, authentic, even without food. In the pouring rain I packed my plates with 3 types of laarb. Though I’m not a chef or a food critic, or even care for kitchen spaces—I’m an eater with ancestral memory.

I tasted the chilies, fish sauce, and limes, because they called for an offering. And we, celebrating Songkran, were the altars.

As a multidisciplinary artist, May immerses herself in various mediums inspired by her Thai-American roots. She is committed to presenting the perspectives of Southeast Asians with educational and contemporary art practice. She grew up in Chicago, attended Cooper Union in New York City, and now lives and works in Portland, Oregon.