Last Saturday, on a sunny afternoon, over 220 aspiring programmers flocked to D.CAMP, a South Korean startup hub, in eastern Seoul to get advice on how to land a job outside of Korea and how to create a work-life balance.

Organized by Girls Robot, a local startup supporting girls and women in STEM (Science, Technology, Engineering, and Math), and sponsored by WISET (Center for Women in Science, Engineering, and Technology), the theme of the talk was “Conquer Life/Career Abroad, A Guide From ‘Big Sisters’ Who Made It.” The guest speakers were Hanna Kroukamp, a senior data scientist at Microsoft (her pen name is “Yangpa” in her Facebook page) and Lee Dong Heui, associate professor of Electrical and Computer Engineering Human-centered Assistive Robotics at Technical University of Munich. Both are mothers of two and were touted as having it all: a successful career and a happy family.

Besides the inspiring mentors speaking on the stage decked out in Girls Robot’s pink and purple logos and posters, the unspoken word that bound the 200-plus strong millennial crowd was “Tal Joseon.”

“Tal Joseon” is a popular Internet meme among young Koreans and means “Fleeing Korea.” Netizens originally used the term “Hell Joseon,” referring to the infernal dynasty kingdom in Korean history, and the buzzword has recently evolved into “Tal Joseon,” reflecting a desperation to escape class and gender inequality.

About one in four South Koreans aged 15—29 is seeking a job to no avail as the unemployment rate hovers at 9.8 percent, according to the Statistics Korea data available for the period from 2000 to 2017. However, government data is more conservative than the real numbers, because it omits a large chunk of the unemployed who are not actively searching for jobs, but are preparing before getting into the labor market.

“So many young people have told me, ‘I can’t imagine myself ever finding a job or starting a family.’ And for women, they feel extra pressure when it comes to the matter of reproduction, because they fear that it threatens the life foundations that they’ve made for themselves,” said Lee Jin Joo, founder and CEO of Girls Robot.

The 30-something aspiring programmer, who came to the talk, said she wants to emigrate to another country where the gender wage gap is less severe and work-life balance is more affordable.

“I’m glad I came today, I had a nice talk with Yangpa, who clearly laid out options for me based on her instinctive ‘optimization’ calculations as a programmer,” said Ada Lee, who didn’t want to reveal her Korean name or age. While working at a trading company in Seoul, she witnessed and experienced sexual harassment in the office and when she raised the issue, she was singled out as the “sensitive” problem employee.

“I would like to live in an environment where it is ok to speak up. I’d rather deal with racism outside of Korea than the sexism that I’ve faced here.” 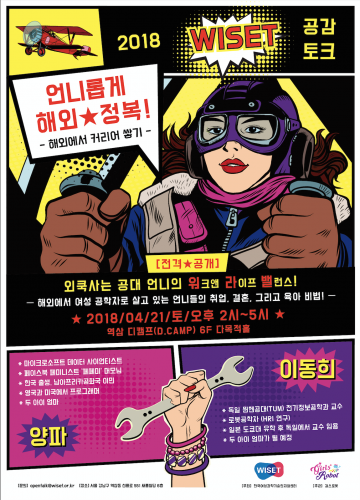 During a Q&A session, many questions about employment in the U.S. or Germany came up.

“I majored in communications. Could I still find a position in robotics?”
(Lee: In robotics, there’s a lot of ways that non-STEM majors can contribute. Especially in Human Robot Interaction, expertise in education or psychology can be useful.)

“In terms of gender equality, does it really feel better in everyday life in the U.S. or in Europe compared to Korea?”
(Yangpa: It’s case by case, but of course general threshold for acceptance is different. For example, if a sexual harassment accusation was made against a professor on campus, it’s more likely in the U.S. to make headlines and be followed through by authorities.)

“Did you have concerns when deciding to have a baby while working full-time?”
(Yangpa: I had a major fear with the idea of having a baby, because unlike your job or partner, you can’t quit your baby. But after I had my first, maybe it was the hormones, but I thought to myself this is the best thing I’ve done in my life!)

Some millennials on the floor didn’t come for any career advice, but to simply get comforting words from the “Big Sisters,” who’d been there and done that.

After quitting her first job, Yoo Sujeong has been pursuing a full-time position for a year. “After trying a while, you just feel tired and restless.,” said the 26-year-old. “I’m not even in a tech field, but I came to the talk today, hoping to get motivation to challenge myself.”