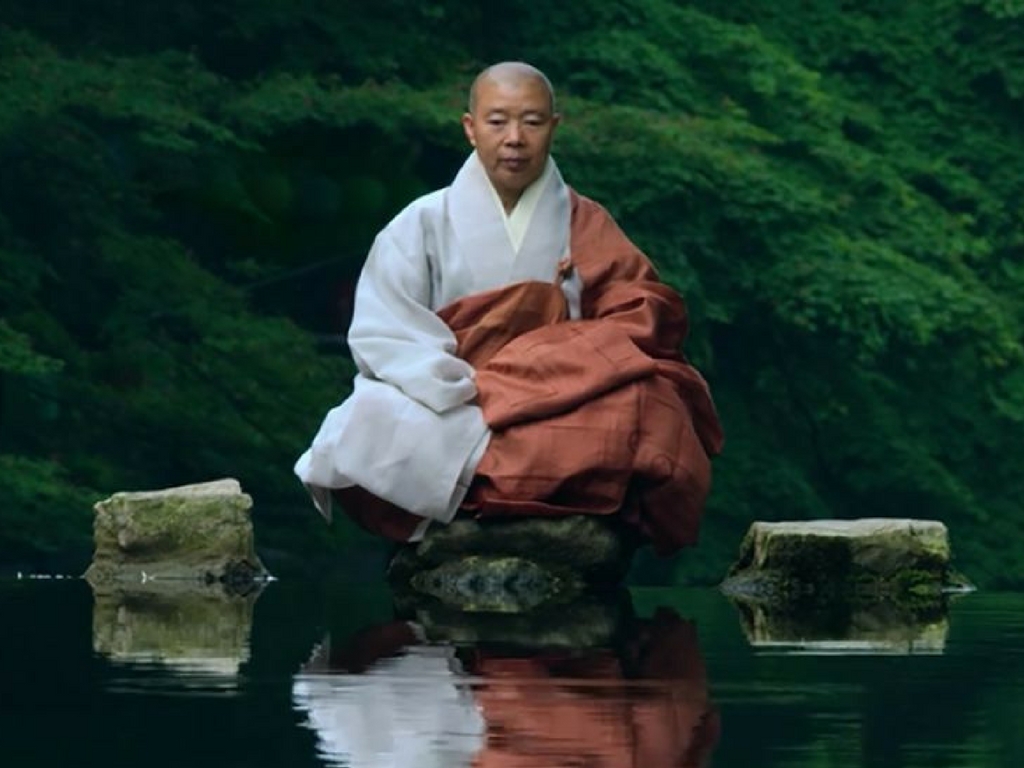 “Chef’s Table” is a documentary series on Netflix that spotlights outstanding chefs around the world and elevates the culinary arts with glamorous food videography to wow the most discriminating audience. Its reputation is so well-known that Netflix neighbor “Ugly Delicious” spoofs the show’s grandiose introduction in one of its episodes, complete with dramatic violin overture.

Among all the famous and unique chefs around the world, there was Jeong Kwan: a South Korean buddhist nun who resides in a remote temple (Jeong Kwan is her buddhist name). As someone who once had a regular meditative practice for many years, and still strives to approach life in a mindful way, I felt compelled to look into her story. I cannot claim to have ‘discovered’ her, however. Nearly 3 years since her first feature story by The New York Times Style Magazine, followed by the Netflix coverage, the philosopher chef’s stardom has gone global.

Just last month, Jeong Kwan stopped by at the Chozen-ji Buddhist temple in Honolulu, Hawaii. She meant to only rest at the temple, but in her generosity she offered to lecture, cook, and eat with a small group there. In Chef’s Table, hers was one of two shows that featured Asian women, and it recently won a 2018 James Beard Foundation Media Award.

How would a Zen Buddhist monk be portrayed on a show as bourgeois as “Chef’s Table”? Though it was framed for a Western audience, she was free to tell her own story with minimal interruption.

When Jeong Kwan was 17 years old, her mother passed away. This became the catalyst that motivated her to leave her remaining family for a holy life, but her goal was not to escape her own pain. She knew that if she were to marry and have children, they would experience the same pain she felt when she lost her mother. So, in an act of compassion, she chose to spare them from suffering.

On “Chef’s Table”, Jeong Kwan is more unique than others. She doesn’t run a restaurant; she cooks for herself, other monks, and visitors to the temple. Rather than adhering strictly to tradition, as one would expect from a monk, she breaks many rules, infusing each dish with a spontaneous creativity rivaling that of classically-trained, world-renowned chefs. Unlike her culinary peers driven by ambition, she is the essence of humility.

“I am not a chef. I am a nun,” Jeong Kwan reminds us. True, some chefs cook for fame and fortune, some for beloved ones. What is the meaning of cooking for this woman who has shed them all?

“There is no difference between cooking and pursuing Buddha’s way,” according to Jeong Kwan, temple cuisine has a specific purpose:

“…[it] keeps a person’s mind calm and static,” she explains. For this reason, garlic, onions, scallions, chives, and leeks, which create an overabundance of energy, are absent from temple cuisine to prevent distraction during meditation. Though simple, it uses various seasonings like curcuma, Sichuan pepper, and shiso, with a flavor base that includes salt, soy paste and chili paste. Every ingredient is fresh and meant to awaken the mind. Food is separate from desire.

This approach is carried throughout the entire process, from garden to table. Jeong Kwan doesn’t tend her garden, which grows wild without pesticides and blends seamlessly into the surrounding forest. She trusts that the air, water and sunlight will produce nourishing food. Sometimes animals will take vegetables and insects will chew holes in leaves. But this is how she shares, harmoniously, with nature. She harvests and prepares ingredients with a blissful mind, and eats with joy.

Her cooking is part of her spiritual practice:
“With food we can share and communicate our emotions. It’s that mindset of sharing that is really what you’re eating.”

For instance, the centuries-old fermentation process, which creates foods like kimchi and soy sauce, reflects the monk’s relationship with time:

“There are [soy] sauces aged five years, ten years, aged for one hundred years. … passed down for generations … looking into myself, I see my grandmother, my mother, the elders in the temple, and me … making soy sauce, I am reliving the wisdom of my ancestors … What is important is that I’m doing it in the present.”

Sometimes Jeong Kwan leaves the temple to lecture about how anyone, not just monks, has the potential to transform oneself with vegetarian temple food. In the classes she teaches at Jeonju University, she urges students to treasure ingredients by preventing waste and cooking mindfully. Westernization of Korean food culture has led to an overabundance of processed foods, and she hopes to heal this problem by imparting her skills and knowledge to aspiring young chefs.

“I teach because I want the world to be united through healthy and happy food and to thrive together,” she says.

Jeong Kwan speaks of her lifestyle and craft with wisdom, joy, and attention, and she invites us all to share the same delight. We don’t need her level of culinary skills or years of practice to replace the stress in the everyday cooking process with gratitude. One way or another, we strive to connect with the simple pleasure of being present in each moment. Jeong Kwan shows us how to start from the most basic activity – cooking your meal.

At the end of her episode, Jeong Kwan offers this farewell statement: “I make food as a meditation. I am living my life as a monk with a blissful mind and freedom. I wish you a healthy, happy life.”