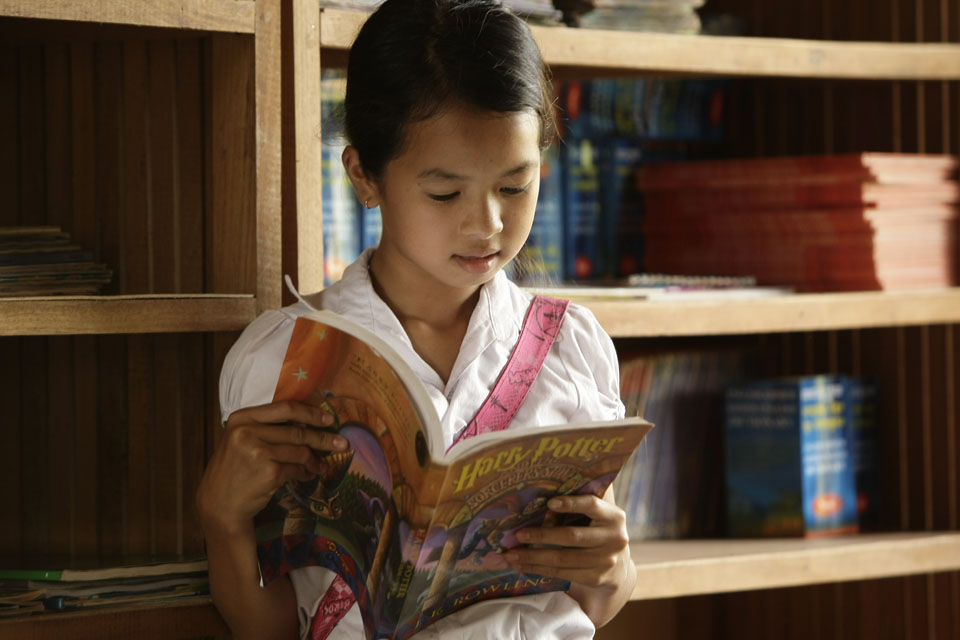 Deborah Krisher-Steele, deputy publisher of The Cambodia Daily had to close the news bureau last September in Phnom Penh amid the Cambodian government’s crackdown on free press. The shutdown came after 25 years when her father, Bernard Krisher started one of two daily English newspapers in the country besides The Phnom Penh Post.

As a half-Japanese and half-American, Deborah Krisher-Steele is still running The Cambodia Daily online with her husband, Douglas Steele as general manager of the paper. The couple also runs non-profit organizations that her father founded to help build K-12 schools and hospital in Cambodia.

Since the closure of The Cambodia Daily, we caught up with her on the whereabouts and what makes her and her family to keep going despite the government’s clampdown.

April Magazine (“April”): Can you walk us through the time up to the closing of The Cambodia Daily?

Deborah Krisher-Steele (“Debbie”): Until last June, we had a friendly relationship with the Commerce Department (of Cambodia) and that’s about when I bought the newspaper company from my father, because he became ill. My father used to subsidize the company with his own money and after I took it over, we registered our newspaper company and complied to everything that the Commerce Department had asked us.

Since the last communal election, the opposition party gained more seats and power so the ruling party started to feel scared that there is a shift that the opposition party could win the general election [in July, 2018]. [The ruling party] started a rumor accusing the opposition is tied to the ‘color revolutions’, backed by the U.N., and that it’s treason. As we were reporting about this, the government had an intent to silence us. Another independent newspaper, The Phnom Penh Post was sold, too, as its chief editor was let go.

*The government levied The Cambodia Daily a tax bill that has been allegedly unpaid since 2007 and with penalty fee in the total of $6.3 million. In consequence, its bureau in Phnom Penh shut down on Sept. 4, 2017. 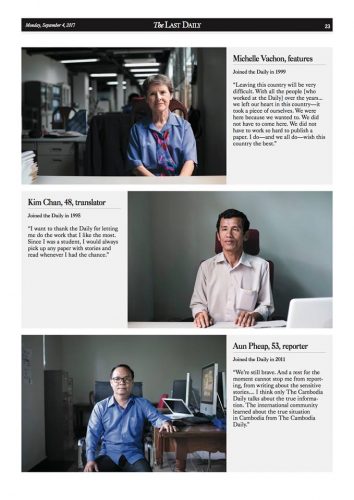 The Cambodia Daily is down but we’re not out. Everybody had to find jobs, but thanks to our supporters, we still stay as a beacon of hope. When things change in Cambodia, our mission (“All the News Without Fear or Favor”) will be up again.

For now, we’re running it offshore using Facebook as a medium, because the government tried to block our website. We’ve been doing a lot more audios and videos for local audience with low literacy. We have over 370,000 followers now. It’s amazing to see that people are poor but they have smartphones, so if there’s no electricity, they charge their phone batteries on cars and go on Facebook. It’s a neat time and the best medium to utilize to the fullest.

April: How are you and your family?

Debbie: We’re OK at the moment. Doug couldn’t come home for 170 days. He’s back now although he plans to go back to Cambodia. (*The family is based in Tokyo. Deborah Krisher-Steel is a caretaker of her ill parents and their 17-year-old son.) The government has frozen our bank accounts for the newspaper and for the NGO (World Assistance for Cambodia), which funds 41 foster children and 100 plus staffs. The freeze against the NGO has been lifted, supposedly because they are backed by the Japanese, American as well as the Australian government.

April: You grew up in Tokyo and went to university and worked in the U.S. How did it you start working with your father in Cambodia?

Debbie: My father, Bernie Krisher, was the Newsweek’s bureau chief in Tokyo in the ‘70s and the ’80s. In 1963, he was visiting Indonesia, he met the prince of Cambodia and was invited to Cambodia. (*Norodom Sihanouk, a royal politician, became the country’s prime minister until he was ousted from a coup in 1971. His exile lasted until 1991 as the Paris Peace Accords were signed.)

In November 1971, my father took me to Cambodia and he was so shocked to see the country devastated after the war, there was no medical care, no infrastructure, and people were cluttered in small houses together. Bernie, 61 at that time, said he’s going to help Cambodia as a way to give back to strangers, because he was a little boy born in Germany as a Jew and when he had to flee, strangers helped him on the way in France and Portugal.

He took it as a calling, and since then I was always at his side working as his assistant.

As a newsman, he first started an independent newspaper in the country. And he built a hospital treating the poor for free, there was no hospital for the poor at that time. We brought doctors from the U.S., and received many donations including from the King [of Cambodia].

For the next 7-8 years, Phnom Penh flourished but the gap between the city and rural areas grew only bigger. And we thought what the country needed was solid education. We launched rural schools project. We went to the World Bank and the Asian Development Bank to get grants to build schools. We built 564 schools for the Ministry of Education.

Also the mentorship program for girls, Girls Be Ambitious was successful, where we’d give a stipend of $10 a month to a family if their daughter attends school without skipping because it was very common to send a girl to a farm or factory or even to an early marriage. Because we’d visit the parents and by putting the value in their daughter, they’d suddenly see that she has a potential.

April: What makes you keep going back to Cambodia despite the risks?

(*Deborah Krisher-Steele was sued for defamation for “insulting the dignity of the Commerce Department,” as she accused the government of leaking the confidential document of the $6.3 million tax bill to the press, which consequently destroyed her business. The authority froze the bank accounts for the newspaper and the NGO programs.)

Debbie: Too much has been built to walk away, the newspaper is only a third of our projects, the NGO has 120 local staffs and 40 foster children.

And I feel the most gratification in helping others succeed. When I see girls succeed, I can totally be in the background, but that’s what makes me happy, igniting in someone that they’re able to use [their education] in real life.