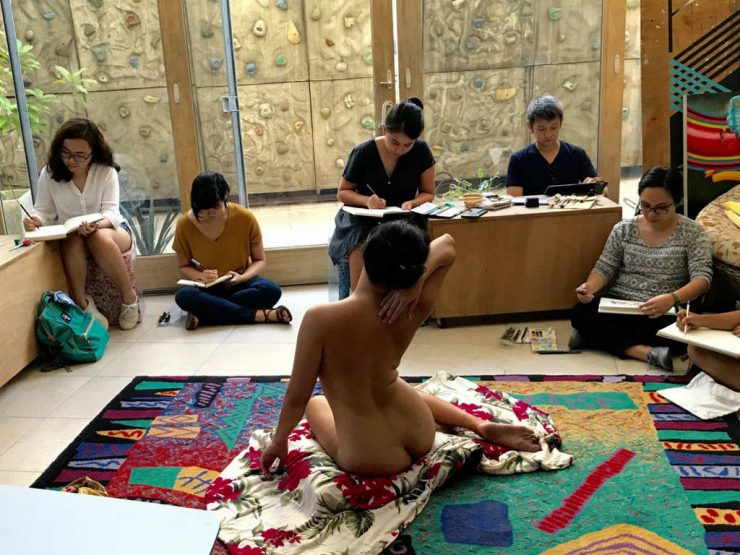 ‘Nudity is more than just vanity. It’s about diving in one’s story and vulnerability’

In celebration of the one-year anniversary, they hosted the Sunday Nudes Group Show – an exhibition of 75 artworks from 26 artists who joined their community and participated in a nude-sketching sessions every other Sundays all year long.

“It seemed fair and deserving to see everyone’s art in one place,” said Dear Prudence, which is her pen name.

She prefers her odd moniker, however she’s not a mystery within the community. On the surface, she may seem reserved, amiable but quiet. Despite the first impression, Dear Prudence was in her element from intensely brooding passion talking to gentle and mellow gestures.

The Sunday gathering was their way to bring together multi-generational people of varying sexual orientations, career status, and share like interests and passion on working around the body-positive nude-sketching bringing empowerment with each and everyone.

“I’m not really an artist, I can say that, I’ve only been doing modelling for years. And here it really opened my eyes that there are so many ways to consume and create. Once there was this guy who just wrote and came up with a poem out of the session. So we want more of that. A conversation between the works,” Dear Prudence said.

There were a handful of people that showed up at the opening night of the show including the Sunday Nudes artists, friends and family who supported the community, and other people hanging around at the Conspiracy Cafe. Dear Prudence walked me around the exhibition space to see the works hanging from two rooms – one at the entrance as you walk in which leads you to the second set at the walls in front of the bar area.

“So there was one moment that caught everybody off guard. The group show was supposedly just a gathering to see the works displayed here, but we ended up doing an unexpected session. We gathered up the artists and our figure model and usually we start the session with proper etiquette. It’s pretty much just decency like no touching and no taking photos except for the personal assistant of the model as we always tell them to bring one just in case things happen,” Dear Prudence explained.

“Now, while the session was running and everyone’s quiet, somebody shouted “Stop taking photos!” so of course everybody looked at the person being called out but turns out it was the photographer and friend of the model. It was our fault not giving people the heads-up that technically he was the only one allowed to take photos there.”

It’s no secret that figure models particularly women are underrepresented in the art world, while their bodies and images are sketched, drawn or painted by the hands of men, there still lies that agony on whether the industry cares, protects and respects every single person involved in the scene. This is why Dear Prudence and her co-founder [name redacted] started Sunday Nudes. It challenged that unfair truth by being the opposites of those old artistic tropes. Depicting the scene of nude-sketching in an empowered, autonomous and non-sexualized way.

Now a year later, the group has produced a ton of artworks, and the number of artists and models has continuously grown surprisingly. The ones presented in the exhibit were all very unique from each other. It was striking to see a variety of styles and techniques ranging from raw pencil sketches and watercolors to abstract shaped drawings to a bit of funk paintings, and even to notable writings.

“The people joining us are really creative in their own ways. This guy who painted on stones was the same one who once brought clay in one of our sessions with a goal of making some sort of sculpture. But that time, the model’s pose was difficult for him so it didn’t happen.” Dear Prudence jumped in excitedly, “It’s really one of our dreams here in Sunday Nudes to have someone do a sculpture.”

I was taken aback by both her sense of ambition and liberation. When I confronted what made them do the things they do now, there was a breaking for emotional and intellectual clarity. Dear Prudence admitted it’s her way of immortalizing oneself – like a form of catharsis, not always fulfilled but at least attempted.

Edit 19.04.2019: this article has been edited to reflect the position of the Sunday Nudes Group following credible allegations of sexual assault against an individual who formerly assisted with the Group. Both Sunday Nudes Group and April Magazine are strongly opposed to sexism and sexual violence in all their forms. —April Editors