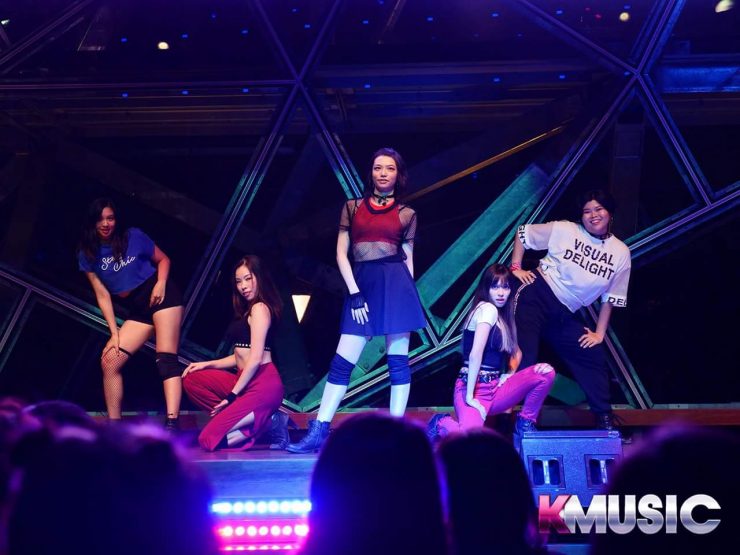 It was a cold wet night as the autumn clouds broke over Melbourne. In the rain, one place was lit up with people bright colors bustling in and out. In this dismal weather only the K-Pop World Festival could attract an audience close to the auditorium’s full 450 capacity. The enthusiastic cheers and booming laughter brought light in the rain.

On May 11 my dance team was lucky enough to compete in the Melbourne Preliminary round. Every year the competition sees a dozen of teams vying for the winning spot in the dance and vocal categories.

Initiated by South Korea’s Ministry of Foreign Affairs in 2011, the festival hosts its first rounds in some 70 countries, with the winners of the preliminaries advancing to the final round in Changwon, South Korea, as the representatives of their country. Already in 2013 more than 60,000 applicants from 43 different nations participated in the festival, today there are more. As you can imagine, the K-Pop World Festival is fiercely competitive.

It was our first ever live performance as a team, Paradox of five members: Venus, Tarn, Dee, Mel and me, Mon. (These are stage names that we prefer to go by.) We were nervous and tried to ease this tension by cracking jokes each other. Still, the butterflies remained.

Despite the seriousness of the event, the competition was nothing but supportive and full of energy. Dressing rooms were a flurry of activity as teams helped each other with style and make-up. Those in the waiting room nervously munched on snacks or gathered their crew for last-minute practice.

It was incredible to see the number of female dancers on stage. Out of 17 teams, 11 were all-female, while the rest were mixed. The stages were diverse—from Red Velvet’s fun and coy song ‘Bad Boy’ performed by our team Paradox, to a sexy rendition of CLC’s ‘Black Dress’ (the most popular song of the night with four performances!), NCT U’s bass hitting ‘Boss’, and finally the winning song of the night: UNB’s ‘Sense’, there was never a dull moment as audience members chanted along.

Dee remembered her first stage experience, “I was nervous until the end because I didn’t want the crowd to feel like they were clapping for nothing … All I could hear was the ringing in my ears from the adrenalin.”

Mel said she felt the pressure even more, “We had a lot of supporters come out to see our first live performance … Luckily, we were able to end successfully. Since our expectations of each other were clear before we stepped onto the stage, which allowed us to relax and trust each other.”

All of us in Paradox come from different careers and backgrounds: Tarn, a graphic designer, is the newest member to the group, who brings fresh ideas and an infectious energy. Venus is a Law school student who has been a ballet dancer since young, she grew her love for K-pop through Super Junior and Wonder Girls. Dee, a fashion stylist, is a member who’s like water bridging conflicts and soothing tempers. And Mel, a pharmacist by day and a mum of Paradox by night, is also a treasurer treasurer, organiser, drill sergeant and first aider. Despite hectic lives, through love of music and movement, we were able to set down our daily stress and join a team to overcome the hardships.

To me, our little dance family is a sisterhood and a support system. For someone who was always made fun of for liking K-Pop and Korean culture, my girls are a refuge, sisters and mentors who unashamedly share the same passions.

Tarn’s experience is similar to my own, “Growing up I didn’t have a lot of girl friends, so Paradox means a lot to me. I genuinely love hanging out with everyone and I believe in our no negativity policy. I think as a whole we always support and encourage each other as women.”

Our crew’s rendition of Red Velvet’s ‘Bad Boy’ came from the ‘Queen of Swag’, Rie Hata herself. A Tokyo-based choreographer, she has choreographed for some of K-Pop’s most famous girl and boy groups—CL, BoA, Twice, Red Velvet, BTS, VIXX, and ZICO. Interestingly, the songs of three of the groups she choreographed for were performed at the Melbourne K-Pop World Festival. The dances created by another industry heavyweight, Lia Kim (who has choreographed for Twice, BoA, Wonder Girls, Sunmi, Lee Hyori and I.O.I), also appeared that night.

With so much distrust and insecurity in the world, I was truly touched by how the K-Pop and dance communities came together at the event. In Australia, the K-Pop World Festival is one of a few major Korean cultural event and the most popular. For K-Pop fans, it is a chance to celebrate our appreciation for the music, people, and moves that have shaped our lives.

I am honoured to be one of the many amazing female dancers in this industry.

“Dancing keeps me going, so it’s nice to have such a supportive community,” Venus said.

“It’s also great to see more people discovering the wonders of dance by taking up lessons, venturing into different styles and becoming part of the wider dance community through their interest in K-Pop.”