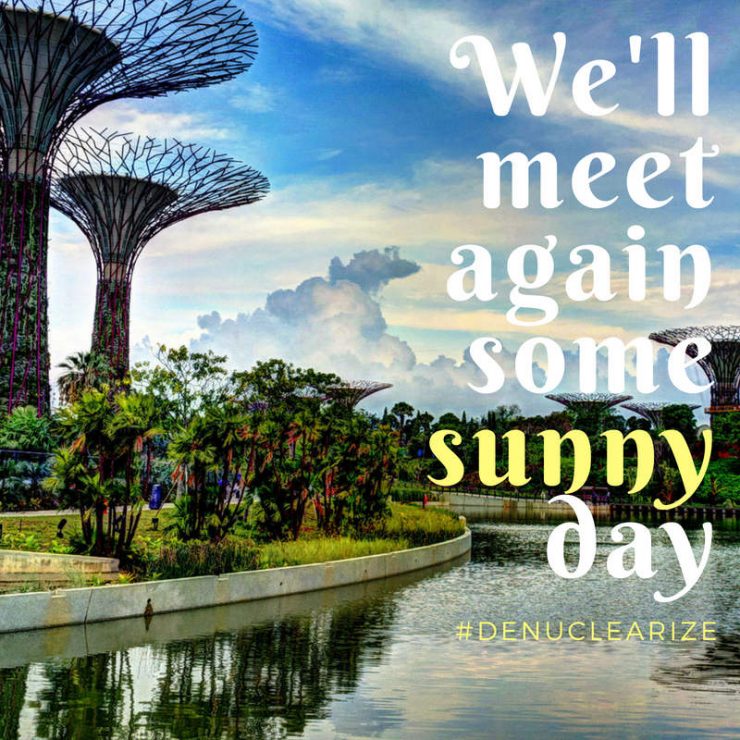 In a historic summit, U.S. leader Donald Trump and North Korean leader Kim Jong Un signed an agreement on Tuesday to completely denuclearize the Korean peninsula, signaling a shift after decades of hostility between the two countries.

In return for North Korea’s commitment to give up its nuclear arsenal, the U.S. agreed to “provide security guarantees,” in a joint statement, according to the New York Times. The signed document lacked the details on how to make the denuclearization process ‘verifiable’ and ‘irreversible.’

The two countries will work further to complete the deal, Trump said in a press conference held later in the afternoon.

While signing the document, Kim said “the world will see a major change.”

A night before the summit Kim Jong Un made a surprising outing in downtown of Singapore, and him taking a selfie with local leaders trended on Twitter.

Besides the headlines and photo-ops of the historic handshake, human rights activists called for Trump to put pressure on Kim Jong Un to end human rights violation in North Korea. A North Korea defector Yeonmi Park, with an activist group Human Rights Foundation, released a video op-ed in The New York Times highlighting the oppression and economic struggles that North Koreans faced.

Although it’s a step forward for transgender communities, they still face obstacles as the applicants have to go through a psychiatric evaluation and be diagnosed with a “gender identity disorder” in order to qualify for insurance coverage, according to a report by PinkNews.

In 2015, Hirsch pleaded guilty to choking and body-slamming Paramount Pictures executive Daniele Bernfeld, according to a report by the Women In the World Media.

In her tweet, she criticized the move as an “INTENSE case of rich white male privilege,” with double middle fingers:

Cool. Emile Hirsch strangled my tiny female best friend until she blacked out at a party in front of dozens of witnesses at Sundance Film Festival (and was convicted) but Tarantino just cast him in a movie. INTENSE case of rich white male privelege eh? Cool. Cool. Cool. 🖕🏽 pic.twitter.com/FkZNmK5fda