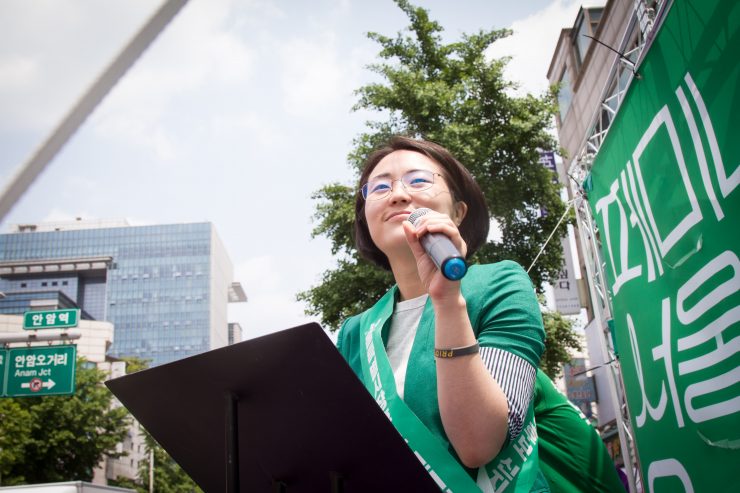 It may take a politician’s whole life to prepare to run for mayor of a city with 10 million people, but for a 28-year-old woman named Shin Ji-ye from the South Korean Green Party, it took merely 6 months and a 4-member team with less than $10,000 in its bank account to run as the first feminist Seoul mayoral candidate.

It costs $15,000 just to apply to run for an office in Korea. The second highest sum in the world, after Japan.

Against all the odds, in the regional elections on June 13 Shin came fourth of nine candidates, the highest placed after the candidates from the country’s three major parties. During her campaign Shin ended up raising more than 66 million won (about $60,000) from small donors.

What was more remarkable was her campaign as the youngest candidate ever, with the slogan of “Feminist Seoul Mayor,” in the patriarchal political environment of South Korea, where men with an average age of 55 take up 83 percent of the parliament’s 300 seats. Her Green Party has no seats in parliament, by the way.

“Today I lost an election. Some 83,000 Seoul residents voted for me, which left me at 1.7 percent of total votes. But I do not fall into despair, because feminist politics in Korea now starts with 1.7 percent of support, not zero,” Shin wrote on her Facebook page after the poll results came in.

The day after the elections

“Our team members welcomed the result, but I thought that if I had had one more week to campaign, I could’ve beat Kim Moon-soo (the conservative Liberty Party candidate) and come in third,” said Shin, wearing her signature forest-green jacket and thin-rimmed glasses, during our interview on the day after the election. She had barely slept after watching the polls with her team members at a local bar until seven in the morning.

“It’s a miracle that we made it to the end of the race with such a small team and a ridiculously tight budget compared to other candidates.”

Her notorious self-painted purple campaign truck, which she had borrowed from a friend, captured the tight-funding of her campaign, compared to established opponents like Ahn Cheol-soo from the centrist party, who had made an unsuccessful presidential bid last year.

Ultimately, the incumbent mayor Park Won-soon with the Democratic Party, currently Korea’s largest force in parliament, won the race, securing more than 56 percent of the votes.

The global network of the Green Party also helped her with the race. Another local Greens candidate, Go Eun-young, who ran for Jeju Island governor, won 3.5 percent of votes and placed third in that race.

“As part of the Global Greens, we were able to expand our imagination of ways and scopes of problem solving beyond Korea.”

Almost 60 different countries have Green Parties across the continents of Africa, Asia-Pacific, Europe, and the Americas. Within the Asia-Pacific pact, the Korean Green Party is in close collaboration with the parties of Hong Kong, Taiwan, and Japan, as they set up common goals, such as tackling pollution.

Her path to compete with these longtime politicians was bumpy from the beginning. Even her campaign poster became a target of misogynistic attacks. In addition to her slogan, “Feminist Seoul Mayor,” her side-angled gaze with a subtle smile drew criticism across the political spectrum with reactions like, “What a smug [look]!” and “How dare you smirk!”

Some 27 of Shin’s posters and banners across the city were intentionally damaged, mutilated, or stolen. Some had her eyes gouged out in the poster or burned with cigarette butts. While calling for investigation of such hate crimes, she also didn’t blink over the intimidation.

“More women should send out that smile. Until now women politicians were forced to brand themselves as either a feminine caring mother or a fighter who’s seemingly more aggressive than men. I wanted to give a message that I’m no weaker or stronger than other candidates just because of my gender, but simply the most qualified to lead Seoul city.”

Teenage bookworm to decide her own fate

Born in Incheon, Shin was innately interested in human rights issues. From a young age, she was angry at society when she found reality was different from what she had learned from books. In her teenage years she devoured local books on student rights and later immersed herself in Susan Sontag’s work.

When she was 15 she joined a progressive political party as the youngest member fighting against rigid restrictions in K-12 schools, where authorities controlled students’ appearance from their hairstyle to shoes to accessories. After a long fight, nothing changed in the school code and the party was dispersed. She quit her public school and decided to attend an alternative school.

“At that time my mom discouraged me and said, ‘You can change the educational system if you become the education minister later.’ And I told her, if I wait until then, society will change me first.”

The lesson she learned then has stuck with her: never wait for things to change but raise your voice now. Although it may seem impossible to bring change at the moment, it’s the small actions that add up and lead to social change.

As a feminist mayoral candidate, who has been a victim of sexual violation herself, Shin promised to end sexual violence and discrimination, close the gender gap in the work place, and to legalize abortion. She also pushed for more progressive agendas than other liberal candidates, such as a basic income for everyone and aggressive restrictions on vehicle traffic to tackle the pollution crisis in the city.

“You see thousands of women protesting in masks, that’s a fear that all Korean women relate to, a fear of retaliation for speaking up. I wanted to give courage to these women and minorities, and pack a punch to society by running a campaign with an eight-letter taboo title, feminist.”

Not all feminist groups agreed with her. As she got to talk with her feminist supporters on the campaign road, she realized there were internal conflicts among minority groups and the feminist movement, which has been evolving in the country with #MeToo.

For example, as one of her campaign promises, she argued for a need to have gender-neutral public restrooms to embrace the LGBT individuals and the disabled who may need the company of a different gender. Consequently, Shin faced pressure from some women’s organizations to drop the issue, especially on transgender rights.

“Somebody’s human rights are not something you can selectively drop, and it is a calling for me as politician to embrace all minorities, and that will require better leadership skills, which I need to hone.”

To take the #MeToo movement to wider social minorities, Shin pleaded with all feminists for two simple, yet big concepts, compassion and a humanitarian mindset.