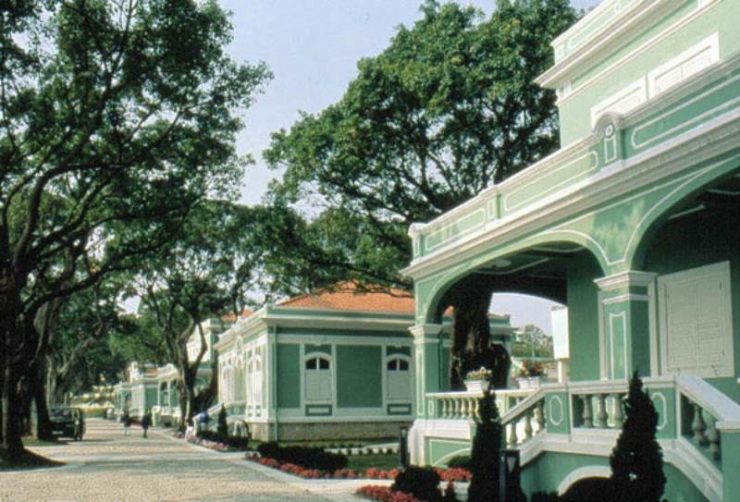 If you have ever visited Macau, chances are that you have come across this glass and steel shrine to its fervent gambling and casino culture. It is the Grand Lisboa, the tallest building in Macau. It is the king of ostentatious architecture and displays a flamboyant exuberance inside and out—a blatant symbol of modern Chinese opulence.

Wherever you walk in Macau, you will notice these titanic buildings in the background. The juxtaposition of gaudy and luxurious mega-casinos with the modest streets and housing of the local Macanese is striking for short-stay tourists.

Internationally dubbed the ‘Las Vegas of the East’, Macau is the only place in China where casinos are legal, attracting millions of Chinese nationals, who contribute to its elephantine gambling industry. As soon as visitors land in Macau’s ferry harbour or airport, there are dozens of casino promoters and bus operators lined up to whisk them away to the casino-hotel-entertainment enclaves. The transfer is so swift that many tourists don’t even see the actual city. Whilst it is easy to get carried away by gondoliers roaming mock canals at The Venetian, or by the Vegas-style neon lights and live bands of the Sands Macau, it has become difficult to see the local identity of Macau and what the city truly has to offer.

Beyond gambling, Macau is a spectacular city that embraces over four centuries of blended Portuguese and Chinese culture and history in its language, cuisine, and heritage.

The local people of Macau speak a blend of Cantonese and Portuguese, sometimes interchangeably (although Portuguese ever less so, and even fewer people now speak the local Macanese Patois). The street signs are labelled in Chinese and Portuguese, painted on traditional blue and white azulejo ceramic tiles reminiscent of Lisbon’s underground metro art and restaurant decoration.

Macau is a place where you can gorge on traditional Chinese dim sums or a classic congee for breakfast, enjoy a bowl of Portuguese caldo verde and fried bacalhau for lunch, and indulge in full Macanese style with minchi and a serradura pudding for tea. The history of Macanese cuisine dates back to when the wives of Portuguese sailors living in Macau over 300 years ago would attempt to replicate European dishes. It even has its own adaptation of pastel de nata (Portuguese egg tart) and bifanas (pork chop bun), which can easily be found in popular streets and neighbourhoods.

The mixing of Portuguese and Chinese cultures has also had an impact on the architectural heritage and urban fabric of Macau. You can find evidence of its colonial military and religious influence in its famed forts and ruins, cosy taverns, and cobbled streets. You can also see remnants of enduring Macanese history in some impressive ancient temples and traditional villages. At the heart of the city you’ll come across Senado Square, a meeting place that connects most of Macau’s attractions. Surrounded by buildings adorned with arched details and painted in white, yellow, pink, green, and brown, Senado Square echoes the colourful qualities of downtown Lisbon, but with Chinese signs and Cantonese spoken on the streets.

The wave-like tiled pavement of small black and white stones, known as calçada, is iconically Portuguese and reflects its maritime complex. The fountain in the middle of the square has a celestial globe that was once used by pioneering Portuguese seamen. Towering in the distance are rows of ubiquitous and washed-out Chinese style apartments, planted between monstrous casino complexes. It’s a cultural exchange between China and Portugal, marked by the intersection of St. Dominic’s Church and the Holy House of Mercy with the Sam Kai Vun Temple. Only in recent times have structures like the Grand Lisboa become a major point of international tourism, keeping their patrons carefully cooped indoors in an air-conditioned gaming paradise.

There is truly so much more to Macau than just its casinos. But with the emergence of mini-Paris, mini-Venice, and mini-London attractions along the Cotai Strip, as well as non-stop resort development across the peninsula, Macau’s space is under invasion by a casino economy that continues to expand and transform the city. Accommodating over 30 million visitors every year, Macau’s gambling industry is now over seven times bigger than Las Vegas and growing. With new and old casinos squeezed into the already dense urbanism of Macau, it’s the residents who must deal with the disruptive effects of the booming gaming enterprises.

The impact of these major urban developments has inevitably transformed the city’s skyline and morphology, where buildings are rising higher and higher, with ever more elaborate ornamentation, each trying to outdo its neighbours. Whilst it doesn’t look like the growth will stop any time soon, it may be time for the casinos at least to embrace Macau’s cultural offerings more and instill some local sentiment into their monumental establishments.

At the end of the day, what makes a city is its people. Portugese sailors used to roam around long-standing cathedrals and Chinese cherished their tradition in atmospheric temples. Now modern Macanese live in this treasure trove of  fusion foods and combined traditions. Macau shouldn’t be a city defined just by its casinos. If a tourist just stays in one of those glittering towers through her visit, she’s missing the great cultural experiences that money cannot buy.