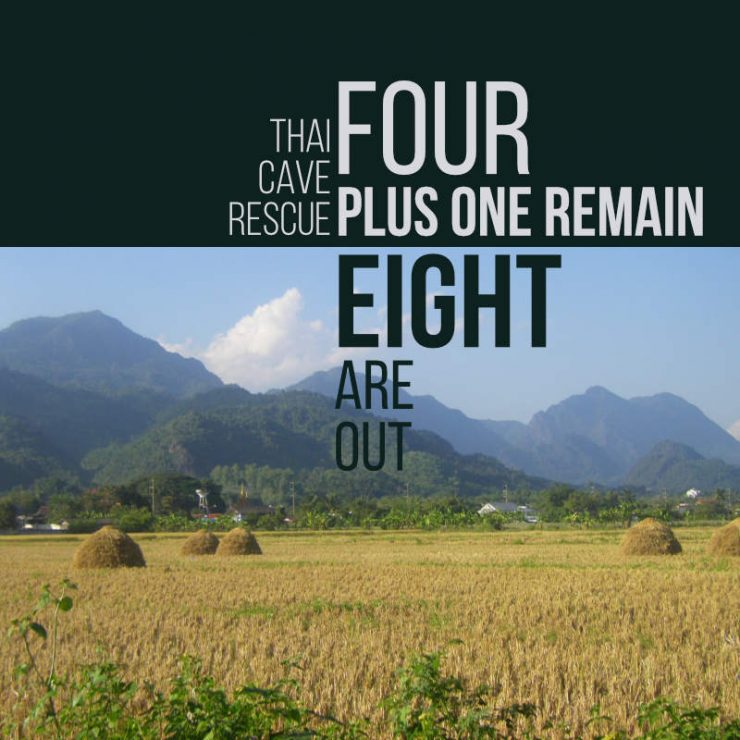 Update: As of Monday evening, boys five, six, seven, and eight have been rescued from Tham Luang Nang Non  cave, The Guardian reported. Four boys and their coach remain in the flooded cave.

The ongoing rescue effort successfully saved the first four boys on Sunday after an 8-hour operation, and the second effort is underway, military and local officials said, reported by The Guardian.

Deep inside the flooded and narrow passageways of Tham Luang cave, messages of hope from mothers and fathers kept spirits up for the Thai boys and their coach, trapped inside since June 23.

As a first communication between the boys and their families, a set of handwritten letters were delivered to them last Friday by Thai navy SEALs, according to a report by Channel NewsAsia. One letter read:

“Dear children, all your parents are waiting for you and sending you our support. We’re not angry and we don’t blame you at all. Take good care of yourselves and keep warm with blankets. It’s cold down there. Mummy is worried, but you’ll get to come out soon. Daddy Sak and Mummy are waiting for you outside the cave, darling.”

The trapped boys and their coach seemed in relatively good condition on the latest video posted by Thai navy SEALs.

The capital of Tunisia has elected its first-ever female mayor, Souad Abderrahim, 53, who ran as an independent. The former lawmaker and militant for women’s rights was also backed by the moderate Islamist Ennahda (Rebirth) party, AFP reported.

“I dedicate this victory to all Tunisian women,” said Abderrahim, a manager of a pharmaceutical firm, “My first task will be to improve the face of Tunis.”

A Chinese comedy drama movie based on the true story of a man, who smuggled unapproved but affordable cancer drugs from India, recorded a breakout opening at the local box office, the China Global Television Network reported.

Directed by Wen Muye, “Dying to Survive” has garnered more than US$45 million over the weekend, after receiving accolades at the Shanghai Film Festival.

And just now, the leaders of Ethiopia and Eritrea have signed a joint peace agreement, ending decades of military and diplomatic strife.

“We will demolish the wall and, with love, build a bridge between the two countries,” said Ethiopian president Abiy, ending years of cold and hot war, and marking the rebuilding of transport, trade, and telecommunication ties between the nations.