The games we play: ‘Think of the Children!’ 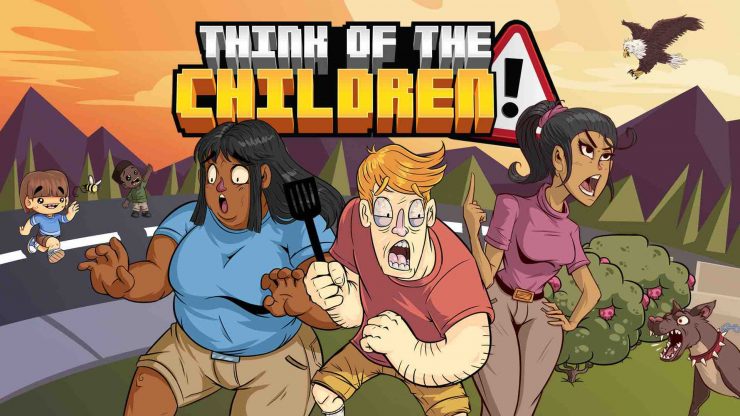 <Dilute’s Game Review> in Pinch is a monthly review on a noteworthy game on Steam based on actual playing experience.

What the Game is About

Parents are called to court. They must prove to the prosecutor and judge that they had performed their role as parents, recalling what happened on the day as per the prosecutor’s deposition.

Immediate preparations must be made for a barbecue party in the park, but it is not an easy task with six kids to look after. An angry dog comes running, a stranger lurks suspiciously (what happened to all those talks about ‘not following strangers’!), and a butterfly in the middle of the street attracts the children. Moments after saving the children from getting hit by a car, the kids are in the pool—and of course, they can’t swim, so here we go again, jumping into the pool to get them out. Completely wet from their episode in the pool, the children move onto the swings where they discover their acrobatic potential…then one of them loses their grip. Even though you try calling them at the top of your voice, it’s not nearly loud enough to reach the other end of the park. Darn.

Think of the Children puts you in the shoes of a parent—of not only one but six children. If you take your eyes off the kids for even a second, they find themselves in the most unbelievable situations that threaten their lives.

Raising kids is tough. Childcare inevitably affects all other areas of life, and the game is intended to make players realize that raising children while managing other daily or irregular tasks on our plate is far from easy. For this reason, the stages are nearly impossible to clear in single-player mode, and naturally, the publisher strongly recommends enjoying the game in multiplayer mode, which accommodates up to four players. Thankfully, more parents engaged in childcare in the game lowers the difficulty level.

The children’s behavior in Think of the Children may be exaggerated for entertainment, but takes a similar pattern to children in real-life. For instance, in reality, it is a high priority for parents with lower-elementary children that their kids’ elementary school is close to home because, even where there are crosswalks, kids end up running into the streets for one reason or another. It’s a relief that this is just a game, and even when accidents happen, you can always go back and try again.

Think of the Children is not the first to recreate the experience (pains?) of childcare into a game. In the Sims series also, it’s almost impossible for one “Sim” to manage work and childcare at the same time, and when the player doesn’t provide sufficient childcare, virtual social services workers come and take away the children. Think of the Children explicitly highlights the aspects of childcare, sprinkling them with fun elements, but achieving its goal of showing the hardships involved in raising children.

Short but fun, made for group play

Think of the Children is a perfect game to enjoy as a group in multiplayer, especially at a party. Anyone with experience of real-life childcare will find themselves laughing over the unpredictable behaviors of the children and the chaos they bring. There are relatively few elements to dig into compared to other games, but you’ll be surprised at how time flies as you and your friends try to figure out how to take care of the kids.

The only downside of this game is the complexity in using keyboard controls. The game seems to assume that players will play with a gamepad, so the keyboard keys don’t show up correctly, and the tutorial is too short for players to get used to the keyboard control setting. The relatively high difficulty of the game might cause some players to give up in the middle, but there is just one mission throughout the game that players need to remember—that the most important thing is to keep all the children safe.

(Written by Dilute. This article was originally published in Pinch on October 15, 2017. Pinch is a Korean online media by women, for women, and of women. We republish it here as part of our collaboration with other media who share our vision of raising the voices of Asian women.)