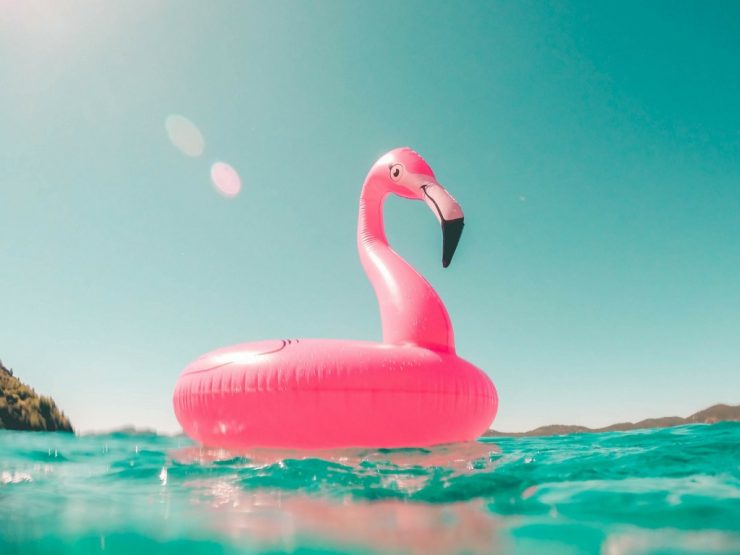 This July is unbearably hot in many countries. Going out, people, even shopping, is annoying till your summer vacation finally rolls around. You just want to Netflix and chill, but it’s filled with its original series that you didn’t ask for. Here are some great things and a few ways to reduce your stress.

Today, Shiatzy Chen launched her collaboration with Disney, but it didn’t send butterflies fluttering in this Disney superfan’s stomach. The look, however, made me sigh out loud. This is how I want to look when I meet a royal family (any country’s will do).

Sometimes posh people’s obsession over Japanese minimalist design puzzles me. A Scandinavian architect (or a Swiss banker or a London magazine editor) may feel genuine physical pleasure in a Muji store. Then, sometimes, I get it, seeing pictures like this. You don’t need to go as far as the patron saint of undomestic women worldwide, Marie Condo. Clean space, the impeccable perfection of what little exists, a kind of convenient comfort you don’t realize you’re enjoying until you lose it. Japanese design has incomparable charm. Like a weekend in the nicest ryokan in Kyoto.

💘Tag someone who makes the world a better place by simply being themselves.🤙 #R29Regram: @instaschon

Guo Pei has the potential to be this generation’s Alexander McQueen, or a legend on her own merit. How she embraces the motif, from forest to gothic architecture, and builds her own fantasy with structure is awe-inducing. If you think she’s not on the level of McQueen yet, remember the omelet dress worn by Rihanna three years ago? This seasoned couturier is getting better year after year.

Photo by @stephenwilkes. Plastic bags and newsprint were trapped against a chicken wire fence at the Freshkill Landfill. This photograph was taken when the landfill was still open but I hope the message to stop using plastic is clear. To see more photos from my travels near and far, visit me @stephenwilkes. #DayToNight #StephenWilkes #recycled #trash #plastic #PlasticBags

Some people want to watch the world burn. The problem is that they are not few. Let’s do what we can. It’s not just about one less plastic cup and one more animal rescued. It’s to send a signal to the companies, governments, media, and ourselves: we want to make our nature great again.

There was a time when Hong Kong ruled the cultural roost in Asia, with exotic English first names and the golden days of Hong Kong films. Then J-pop and J-drama and Japanese style swept. Now Taylor Swift takes a selfie with Korean boy group BTS and people are jealous of her. Maybe Taipei can be the next manufacturer of cool. Based on the street fashion scene, maybe it’s already happening.

Tadashi Shoji is known for evening gowns and cocktail dresses. It shows even in his wear-to-work, with lace, crochet, and chiffon flattering all bodies (it seems the gentleman made sure of that). You don’t have to look feminine, but you can when you want to. Heck, you can wear a feathery yellow dress to work and still get the job done.

for a long time people made me feel ashamed of my body. then i became ashamed of my body. people wanted me to be weak because thats what a girl “should” be like. i threw away my ambitions and goals. well, i’m not that person anymore. I will always continue to work hard, become stronger, and learn to love myself for who i am, imperfections and all. 오랜 시간 동안 저는 다른 사람들의 편견들로 인해 제 몸을 챙피하다고 여겼어요. 점점 제 몸에 대한 자신감도 잃게 만들었구요. 여자라는 이유만으로 사람들은 제가 연약해야 된다고 생각했기 때문에 제 자신의 야심과 목표를 포기해왔는데, 더 이상 저는 그런 사람이 아니에요. 항상 더 열심히 하고 더 강해지고 이런 제 자신을 사랑할 줄 아는 사람이 될거에요. 완벽 하지 않아도. #nikewomen

“When you live in Seoul, you give a billion percent,” says Amber (or a copywriter for Nike). Seoul does that to its people. You gotta be fit to survive. And Amber is fit.

Luke always wanted to bring me back to South Korea. He suggested a few times we go there for our honeymoon (we haven’t had one yet due to the seasons so we’re going later in the year), but I would immediately say “No, I’ll probably be crying most of the time and I don’t want to do that on our honeymoon”. I had no idea what to expect from my birth country or how I would react to it. For someone who’s always been able to compartmentalize emotions I always thought I would find this trip confronting, which is in large parts why I think I avoided it for so long. Little did I know that instead of feeling confronted with myself, I would experience a sense of calmness and joy. I would really love to say it was Luke or myself that finally convinced me to come back, but instead it was work or how I see it, the universe drawing me here. We’ve kept this one a secret for a while and I can’t wait to share with you the reason I’m here 🦋

Many international adoptees have poignant stories about revisiting their biological motherlands. It breaks the bottom of our hearts, whether we share the experience or not. Here, this beautiful photostream of an Aussi fashionista taught me that your life, in and out of Instagram can go hand in hand.

It’s a Korean reality show where the viewers vote for the candidates of a pop group. The first season was to make a girl group, and the second for a boy group. Some of my friends are hardcore fans who’d take those members to family gatherings if they could. Now the third season is back with more girls, and as a collaboration of Korean and Japanese agencies. I still don’t know what to think about the show, but I’m hooked when it’s on.

If you have to wear something in this heat, let it be the lightest and breeziest fabric. Indonesian brand Sukkha Citta’s motto is #MadeRight, and they seem true to their words. They work with rural craftswomen with One Village One Collection model, and the colors are made in eco-friendly ways. And it’s classy and pretty as an angel’s seasonal robes.

I don’t usually warm up to the typical story of “a weary white man finding peace in the orient,” but there’s something romantic about Jim Thompson, a former American spy who helped revitalize the Thai silk industry and disappeared in Malaysia. Jim Thompson’s fabric company doesn’t seem to grasp the brand’s real charm. Visit Jim Thompson’s house in Bangkok and immerse yourself in his melancholy. You may buy something silk out of sentimental reasons.

With Antman 2 and The Incredibles 2 dominating local cinema, you realize that it’s been a decade that people have been saying Marvel and Disney’s winning streak cannot go on forever. Then you see a project like this and get back to rooting for them. Little girls watching Disney Channel will have more characters they can relate. They’ll feel entitled to save the world.

(Yes, I skipped June, because I thought nobody was coming for this series. Then one reader said, “What happened to the series? I liked it, because it’s different from other fashion magazine style guides. With, you know, your punchlines.” So the series is back.)