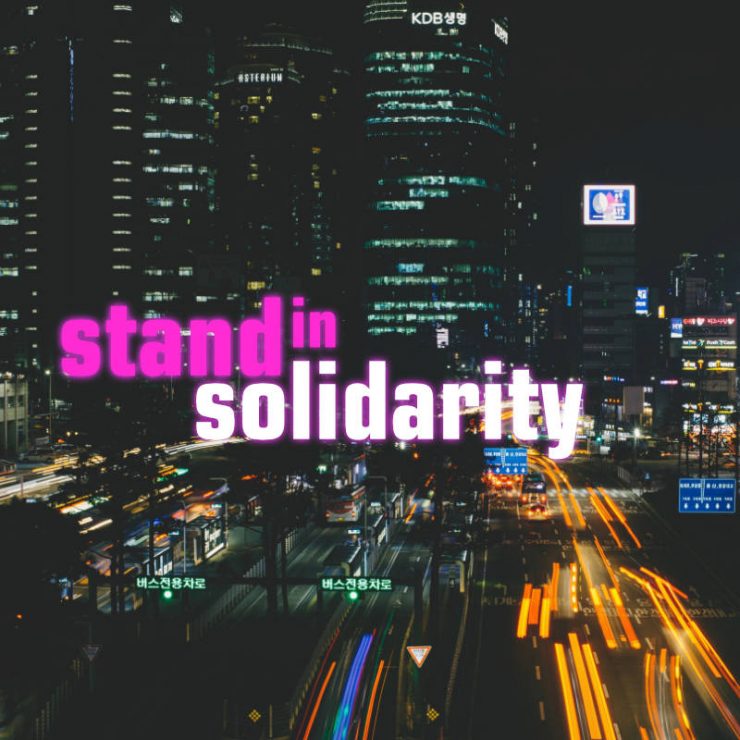 South Korean women gathered at the Seoul Western District Court last Friday to stand in solidarity with a #MeToo victim.

Last Friday, around 100 women went to Seoul Western District Court to support Kim Ji-eun’s #MeToo allegations against former South Chungcheong Province Governor An Hee-jung. Kim Ji-eun was the governor’s former secretary, and had revealed in March that he allegedly raped her four times between June 2017 and February 2018.

Courtroom attendance has become a new form of #MeToo and #WithYou activism in South Korea. Gender education specialist Son Kyung-Yi, who was an attendee of the trial, emphasises that court attendance provides meaningful support for victims.

“In my years of experience helping sexual violence victims, there was always greater attendance from the perpetrator’s side at trial, which pressures both the victim and the presiding judge,” Son says, “So just being there to psychologically support the victim and directly witness court proceedings can really help the victim.”

The country’s #MeToo movement successfully took off earlier this year when the Governor of South Chungcheong province admitted wrongdoing and announced his resignation following the rape accusation by his secretary, Ahn Hee-jung

Two Pakistani women pilots have taken social media by storm after successfully flying through a difficult route between Islamabad and Gilgit in Pakistan.

Captain Maryam Masood and First Officer Shumaila Mazhar of Pakistan International Airline (PIA) flew through Gilgit, which lies in a narrow valley and is the main city in Pakistan’s mountainous Gilgit-Baltistan regio. The city’s airstrip is renowned as dangerously short and located in a tortuous position at the end of a slope.

“I’ve always wanted to become a pilot, I’ve never thought of anything else in my life,” says Shumaila Mazha. Last month, PIA released a tweet to praise the two pilot, “The flight to Gilgit is very challenging and requires a lot of precision and technique. Our dynamic duo, Captain Maryam Masood and First Officer Shumaila Mazhar make it look so easy as they fly through the mountains celebrating the beauty of our northern areas! Way to go!!”

French woman was assaulted in broad daylight after confronting her catcaller in Paris.

Last Thursday, Marie Laguerre was walking home in Paris when a man started making sexually degrading comments at her on the street. When Ms Laguerre confronted him, the man violently threw an ashtray at her, when it missed he slapped her with dozens of witnesses outside a cafe

Ms Laguerre says this wasnot the first time she experienced street harassmen, “It wasn’t the first time – that day, that week, or that month, it had been building up. I got angry and said ‘shut up’. I didn’t think he’d hear, but he did”.

Since the incident, she has filed a complaint to the police and dozens of people who witnessed the attack have rushed to her defense

Disney has announced their plans to eliminate all single-use plastic straws by 2019 across the globe.

With the goal of being more environmentally friendly, the corporation states in a news releas that this will amount “to a reduction of more than 175 million straws and 13 million stirrers annually.”

Following the examples of Starbucks and McDonald’s, Disney is one of the latest major corporations to announce a ban on plastic straw, stating that they’ll offer versions made out of paper, bamboo, or other more sustainable materials.