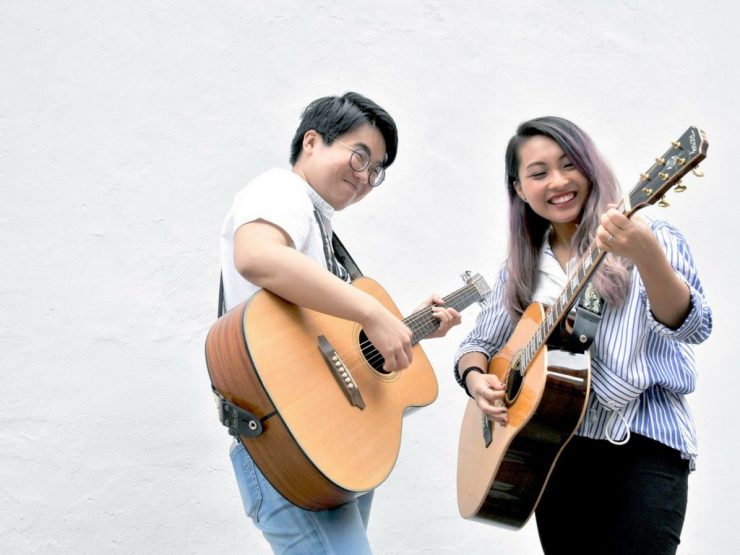 A couple of years ago, a band from Hong Kong busked on cities and streets of Eastern Europe. No one has heard of them, but their acoustic-pop music caught the attention of passers-by.

Kaki and Cup met in a guitar class back in 2012 where they found joy in writing originals. The two first performed as a duo in a student concert and since then, they started playing music together and officially formed Winter Bagels in the year of 2016.

The band released their debut EP “Winter Bagels”,  flying it to Eastern Europe in summer for one month busking. After the trip, they have continued to participate in local music events over the years. But it’s now, on their brand new original single “grey is the new blue,” that they are really ready to shine with the song showcasing not only their dulcet tones but also their heartfelt lyrical abilities which showed the opposite side from their upbeat busking roots.

We spoke with Cup after the song’s release and talked about their music, touring and what else they have planned for the year 2018 and ahead.

Congratulations on your new single! I love how it’s somber and cold yet there’s comfort in it. How did you two come up with this track?

The song is inspired by a movie 《七月與安生》(Soulmate). It’s kind of our film review to the movie. It’s a story about friendship and youth between two girls. “grey is the new blue” is not about the color. It’s more about an emotional phase of being upset yet hopeful towards friendship. It could be a moment of listening to an old song and recalling a fade-out friendship. I wrote this song in December 2016. The song was an outlet for me as I was undergoing some hard times with friends.

The imagery in the music video mirrors the whole picture of ‘grey is the new blue’ both literally and metaphorically. What was running through your minds when producing and filming that?

The music video is taken place near my home. I pass by those bridges and surroundings every day. When we first had the discussion about the video, I thought of applying my daily routine of going home into the video. I wish the viewers could understand more about the state of mind of the song. It’s a girl making use of some me-time with herself on the street and thinking about her friends.

The sound on this single is almost cinematic, it’s far from your usual upbeat vibe on busking roots. How did you go about writing the instrumentation on this song?

I mainly write songs in guitar. I am heavily influenced by Brit pop like Oasis, Radiohead, and Coldplay. I have always wanted to write a song having guitar and strings merging together, like Damien Rice. Once I completed the song, I arranged with Kaki and consulted our producer Stephen about where to add the strings part. The whole recording went smooth as we started from rhythm guitar, and then second guitar done by Kaki, and then double bass by our friend Pene and cello by Rebecca to have a nice touch on the song. I was so moved when I first had the rehearsal with strings. They played beautifully.

“I remember how we used to laugh, to cry, to dance, to listen to songs that I wrote, books that you quoted, that you weep,” this line repeatedly came through the song. It shows heartbreak is as strong sentiment for friendship as for romance.

It is because sadness always comes harder than happiness. People tend to remember sad moments rather than happy moments. Heartbreaks and goodbyes allow us to review ourselves and grow up.

It’s been rad seeing some of your videos from starting at the busking scene touring around Europe the previous years. What have those experiences been like?

We were a trio when we went for the busking trip. It was a very intimate and intense trip as this is our first time to travel and be together for a long period.  As a young band, the trip provided us with a chance to enhance our music and mind into the next level. Needless to say, meeting people from different places was also the fun part.

Playing on a (very) public place with no particular audience gives you the most unexpected moments for sure. What was your favorite one?

For Kaki, playing at the Galata Tower in Istanbul must be the most memorable. That was our last city and we were really connected with the audience. We were like supermodels out there as the locals are curious with our looks and asking for photos after our set.

For me, Santorini is my favorite. Being able to play and sing next to the Aegean Sea was a blast. You could even smell the poo from donkey at the stairs while singing.

What do you think draws people to musicians playing out on grounds? Do you play differently on this space compared to indoors shows?

It’s a matter of expectations. People expect a lot more when you play in a proper gig or a proper place. In contrast, the expectation is lower when you perform in the street, but once you clicked with the audience, the response could be even louder than a proper one. I guess people are prone to the spontaneity and city vibe coming out from street performing.

What I notice with Winter Bagels is its simplicity and honesty between the artist,  music, and audience. Sharing the exact emotions and feelings as it is. And that’s such a vulnerable thing for people to do. Does it scare you sometimes?

I think the valuable part that we both hold is that we write what we feel. All of the songs that we wrote are based on our experience. Maybe that is why you can sense the simplicity and honesty from our music. To be honest, everyone has similar emotions but the key point is that you are not afraid to face it and turn it into a song and present it wholeheartedly.

Do you prefer writing and recording music or doing and performing shows?

This is always a question I asked about myself. Personally, I prefer writing and recording music than performing. I am still learning how to enjoy myself while performing. It could be a life-long learning.

Our upcoming gig will be performing on a music platform “Wow and Flutter” in Hong Kong on August 22. We were excited about that as it is our first time to play a studio session. We are planning to launch a new song in this Winter, too. Not sure whether it will be an English or Chinese song tho.