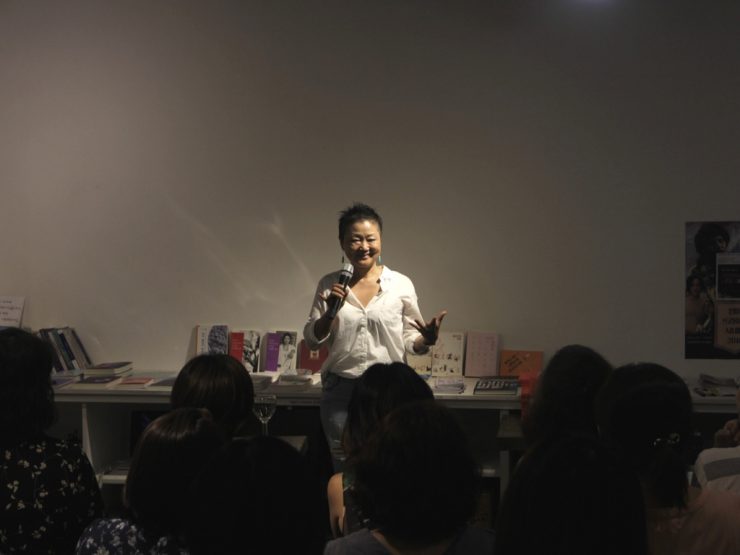 The women-led protest is unquestionably a prevalent issue in South Korea today. It all began in this January when a South Korean female prosecutor publicly shared how she had been sexually harassed by her boss. Since then, a startling number of sexual abuse cases have been thrust into the limelight, happening across the board in many sectors such as entertainment, business, sports, politics, and education. The latest women demonstration took place on August 4th, and rallied more than 70,000 (as estimated by the organizer) female protestors. Furthering the cause of the #Metoo movement, this fourth mass rally was a platform to voice their anger against the current rise of spy-camera pornography.

Observing the current situation, Ms. Chung Hyun Kyung, an Associate Professor at Union Theological Seminary in New York City (‘NYC’) and a global activist for feminism and peace, strongly argues that anger could lead to a positive change in society. Presently residing in NYC, she is an expert in eco-feminist theologies and spiritualities from Asia, Africa, and South America, a champion for the Christian-Buddhist dialogue, as well as a researcher of disease and healing in different religious traditions.

On 27th July, she delivered an uplifting, spiritual lecture in Doing, a feminism themed café in Seoul.

“Many religions teach that anger is equal to evil and endurance is a virtue. Particularly, women’s anger has been considered worse than men’s. Then what has happened as a result of this perception? Women have suffered under a patriarchal system and have not been able to make their own voice,” Ms. Chung asserted. She believes that women’s anger, which has now garnered a huge attention in South Korea, should be further encouraged and thoroughly expressed. “If you want to change society, you have to resist being overpowered by the authority and say instead that you are not okay. If you keep enduring passively, it will affect your self-esteem and eventually you will end up hating yourself.”

Ms. Chung’s core message comes from various experiences of her life. When she was a South Korean college student in the 1970s, she was kidnapped and tortured by the police. She was accused of reading ‘prohibited books’ on the progressive theology of the Third World and of joining a social movement. In the 1980s, she fought for the democracy of South Korea and educated both the prostitutes and the impoverished.

In 1991, she addressed a gathering at a World Council of Churches in Australia, and delivered a speech that caused an uproar. She was accused of syncretism (combining Christian teachings with different elements of other religions) and called a witch by some conservative theologians. At that time, she had to get a divorce as well. She recounted that it was the hardest time in her life and she had spiraled into a period of self-loathing. “To get over my traumas, I actively spoke out for peace and focused on my study of religions which crossed cultural boundaries.”

She had walked through a bombing site of Cambodia, visited a Palestinian refugee camp and met 200 female Muslims, as well as traveled to 15 countries as part of a peace project. Ms. Chung maintained that through these experiences, she could heal her hurt and deeply understand other people’s traumatic experiences. “Anger itself has the power to heal wounds. So don’t stay depressed. Your anger is not wrong. If you deal with it properly, it will transform into a positive energy.”

To this day, she still expresses anger while fighting against injustice. For instance, the Union Theological Seminary, where she has worked for 22 years, plans to build a 42-story condominium as a way of making a profit. As the institute has always stood on the side of social justice, this real estate plan runs counter to their ethical mission. Chung said that only a few professors openly oppose this architectural project lest they might lose job security, status and privilege in the school.

“People, who can fight, must fight. I have my home in Korea to go back to even if I lose my job. I will continue to fight for the original mission of the (Seminary) school, and many of alumni are on my side. Even if my opposition will not change the school’s realty project, I believe it is important to leave a legacy of people who are not being silent for the sake of money and power,” Ms. Chung remarked.

Understandably, some forms of anger will be subjected to heavy criticism. Megalia and Womad, two radical feminist webpages in South Korea, for instance, receive backlash for its sometimes blistering, aggressive content. With such an adverse reaction and public censure, can anger really foster a revolutionary change to society?

Ms. Chung emphatically said yes.“I would say, ‘do not focus on a few wrongdoings but see the overall context’. Naturally, not all actions of those who are angry can be right. But if a group of people rise in anger against something, our society should make a point to understand what makes them angry. Remember, there has been no revolution without anger. Even Martin Luther King’s powerful speech would not have garnered white people’s sympathy if Black Panther Party and Malcolm X’s radical voice had not existed. While the extremist debate in Megalia and Womad is still in full swing, I believe that a lot more feminists are likely to get support after this initial confusing period.”

On the flip side, there are reasons why some people cannot express their anger. Tied by cultural and religious constraints, some are afraid that they will be criticised by others for succumbing to their anger.

Ms. Chung countered that the expression of feelings is the basis of a full, wholesome life, and this belief is fundamental to her life’s philosophy. “Life is beautiful when we can keep three things: To feel our own energy, keep our true voice and be responsible for what we say and behave. Remember that you have power, express your feeling every moment and be responsible for what you express.”

In her message to the readers of April Magazine, Ms. Chung predicted that women would hold more power in the coming age. She further commented that many people had suffered brutality in the name of enlightenment, a Western doctrine of a male-dominated culture. In her opinion, we do not need enlightenment but ‘endarkenment’ instead to bring about peace and heal the world: hear the voice of the people who have been kept in the dark, and women of Asia, Africa, and South America. (In line with this endarkenment theory, Chung modified the meaning of her name from ‘Wise Light’ to the same Hangul sound yet different meaning ‘Dark Mirror’ when she became a full-fledged adult.)

For her parting words of the lecture, Ms. Chung quoted a line by an Islamic sage: “Life is as short as a lightning struck on a green field on a summer day.” Enjoy fully every moment of your short life, with all of your heart, she imparted this advice with a winsome smile.

Jihyun is a journalist and broadcaster based in Hong Kong and Seoul. She is interested in human rights, labor and gender issues, and loves learning languages.