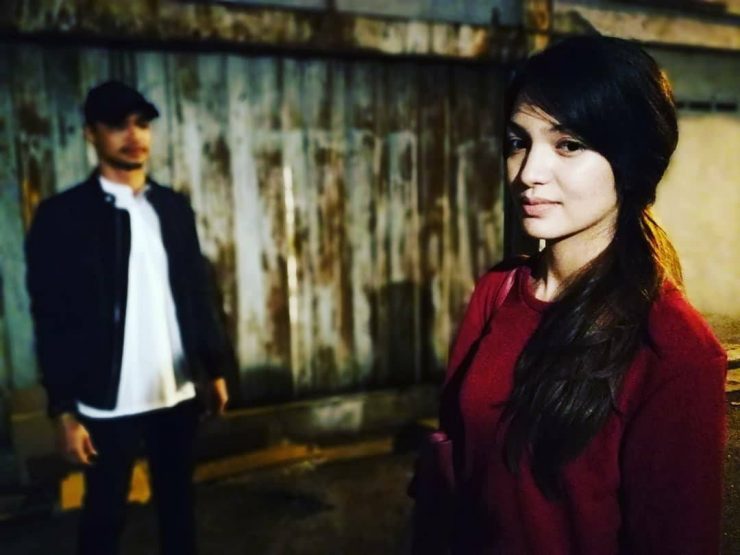 Malay dramas are often the bane of my life. During my adolescence (which happened to be the rocking late 80s) I watched my share of awful melodramatic Malay series which, over time, sounded like broken records. Sub-par acting, tacky set designs (orange juice and restaurant table scenes must, bizarrely enough, go together), wordy scripts, and outrageous premises (backing up a car into your porch and killing your toddler).

Fortunately in recent years Malay dramas have gained noticeable traction with a better crop of actors, conversational scripts, and inventive plotlines. The advent of global internet connectivity has also exposed Malaysia to present-day standards in television series production. Yet, despite the availability of different genres, boy-meet-girl storylines still garner large followings and make up most of the ratings. Various permutations to the romantic plot keep viewers readily amused and hooked to their screens. The latest offering in this genre, entitled ‘Nur’ (which means Light), both upends and magnifies the notion of a fateful encounter by making religion a focal point of the story.

Premiered during the previous Ramadan (Muslim fasting) month in Malaysia, Nur depicts the challenges faced by star-crossed lovers Adam (played by Syafiq Kyle) and Nur (played by Amyra Rosli) before and after they become a married couple. The setbacks—at times humorous, but mostly sad—mirror real life through engaging dialogue and believable characters.

For the uninitiated: Malay dramas and cultural-cum-religious motifs are always mutually inclusive. Like Korean dramas and their emphasis on honorifics, family honor, and cultural values, these dramas rely on familiar cultural and Islamic references to drive home a message to their viewers.

When characters mix up between what constitutes adat (local customs) and what is required in agama (religion), tragic or comedic consequences will ensue. In Nur, these two elements entangle and compete with one another to answer the crucial question: can one’s background make or break a person’s destiny?

Popular young Ustaz (religious teacher) Adam and the titular character Nur first stumbled into each other at the Masjid (Mosque). Having repeatedly received interesting Islamic questions from an anonymous fellow worshipper during Islamic Kuliah (talk) sessions, Adam was curious to know the identity of this mysterious person. The inquirer turned out to be none other than Nur. Nur managed to avert a confrontation with Adam by running away from the masjid compound. He felt perplexed by her rash action and resolved to find her.

He finally tracked her down to a dingy back alley where she resided with her mother, Mona who worked there as a prostitute. Nur was supposed to learn the tricks of the ‘trade’ from her mom, but she was more interested in understanding Islam. She was performing a Solat (or Salah, which means prayer) in a quiet nook of the alley when Adam discovered her.

At first, he was shocked to find her doing that amid a place full of vices. Following the wise advice of Adam’s father, renowned Imam (or a respected Islamic scholar) Datuk Ayah Haji Mukshin, however, Adam learned to look beyond appearances and sought to help Nur out. She was initially wary of his approach, but started to warm up when he answered the query which she had written in the Masjid. Slowly Nur developed a close connection with Adam through a series of meetings to teach her more about Islam.

All hell broke loose (pun intended) when Adam’s mom, Hajjah Musalmah, and sister Aishah found out about the scandalous relationship. To them the union of the daughter of a prostitute and the son of a famous Imam was an abomination. Aishah was especially against the match and wanted Adam to instead marry instead his betrothed, Dr. Qhadeeja, who had for years carried a torch for him. She obviously surpassed Nur in terms of lineage, profession, and wealth—all the great ingredients of a future in-law.

Meanwhile, Aishah’s husband and Adam’s brother-in-law, Ustaz Syed Hamadi stands as one of the more interesting characters in this drama. He is likened to a wolf in sheep’s clothing who, behind his father-in-law’s back, abused his Ustaz title to pocket the funds for the Darul Mukshin orphanage, and frequented prostitutes in the back alley instead of performing his religious duties.

Despite knowing the truth, Datuk Haji Mukhsin kept mum when the media caught wind of Adam’s sighting with Nur in the alleyway. He believed that his son had heeded a calling when he set foot into the seedy area. Adam’s dakwah (Islamic outreach initiative) to the people in the alley eventually bore fruits when it got a huge nod from his followers.

Post-marriage, Adam and Nur continued to receive brickbats from the people around them. His mother and sister were unhappy with an in-law from a disreputable background. Aishah was especially wicked towards Nur, to the point of accusing her of putting a hex on Adam and the family. A particularly hilarious and viral scene involved Aishah dipping her hand into a traditional soup cooked by Nur in an attempt to prove that the latter had added a charm to the soup. Lo and behold! The supposed charm is none other than a pack of sup bunjut (a spice pouch) left inside the soup.

Nur instantly became a household name after this outrageously funny snippet caused a sensation on social media. On a more serious note, however, like its protagonist, this 19-part series is not without its share of controversy. Nur came under attack for its uneven portrayal of religious figures who were mocked as penunggang agama (literally translated as a religious rider; it figuratively means someone who exploits his religious knowledge for personal gain).

In the case of Datuk Haji Mukhsin, for instance, he has resigned himself to a life of TV appearances as a source of stable income. Likewise, Adam followed his father’s footsteps and heavily relied on the power of social media to remain current. Both of them were elevated to celebrity status thanks to Aishah’s scheming. Since she needed them to get ahead in life, she loathed Nur for disrupting and ruining her ‘worldly’ plans.

The most glaring example of penunggang agama undoubtedly goes to Ustaz Hamadi, who used his religious title to siphon off money and patronised prostitution rings instead of Masjids. Ironically, he accused his wife Aishah of committing Dosa (Sin) when she rebelled against his irresponsible ways.

I love how Nur sets off a meaningful conversation on good versus evil, character-labelling, as well as our society’s obsession with breeding and wealth. Across other cultures and religions, we can also see people struggling with similar issues. Some people are quick to compartmentalize others into clear-cut categories while turning a blind eye to certain folks for the sake of bloodline. By putting religion at the forefront, Nur forces us to question our own unyielding stance on specific topics. “Do we really care if someone used to be a prostitute?” “Does a lineage make a great person?” “Can you put a value on somebody based on his outward level of religiosity?”

Dramas like Nur are the stuff of legend: they are leave an impression without being coarse, are clever without desultory comments. When viewing, just remember to take everything with a pinch of salt, then you don’t need to use a sup bunjut to enhance the flavour!

Eliza is a mother of two and multi-tasker in Malaysia. She has to start her day with coffee, loves to look up words in her spare time and finds joy in a seaside retreat. Her children mean the world to her, alongside a daily dose of Korean dramas.