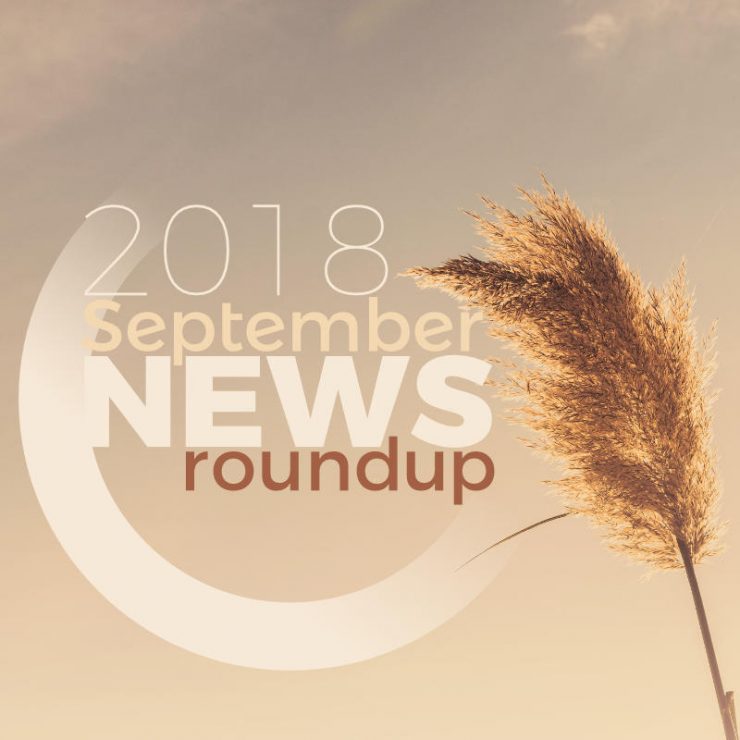 1. Padma Lakshmi opened up about her past

The American celebrity Padma Lakshmi revealed that she was raped at 16 and stayed silent. She’s 48 now. What triggered her to open up now? Two names in one (head)line: Kavanaugh and Trump.

If you’ve been fortunate enough to avoid these names this month, here’s what happened: Brett Kavanaugh is a nominee to become a Justice of the Supreme Court of the United States. On September 16 the Washington Post exploded with the story that Dr. Christine Ford claims Kavanaugh had sexually assaulted her in high school. Another allegation by a second woman, Deborah Ramirez, followed. Ford and Kavanaugh were questioned by the Senate Committee on September 27 and an investigation is planned. In the middle of this controversy the president of the US said that if what Dr. Blasey said was true, she would have filed a police report years ago.

So Lakshmi, besides many other survivors of sexual assualt, stepped up and wrote, “I understand why both women would keep this information to themselves for so many years, without involving the police. For years, I did the same thing.”

2. Michelle Yeoh to produce a movie about a crazy rich Asian

If you’ve been anxious to know what will be the next step for Crazy Rich Asian crew, hoping it won’t be a one-hit wonder, rest assured. Henry Golding is to film another romantic comedy with Emilia Clarke (a.k.a. Kaleesi). Constance Wu, ever an activist, is starring in an indie film (it’s on Kickstarter). Awkwafina is to host a Saturday Night Live segment. And Gemma Chan will appear as the formidable foe in a small project called CAPTAIN MARVEL.

That said, the matriarch Yeoh climbs to another level. The Malay acress is set to produce a film based on the best selling book Billion Dollar Whale. It’s about the Malaysian fugitive businessman Jho Low—known as the ‘Asian Gatsby’—who engineered the 1MDB money-laundering scandal. This guy basically stole money from the Malaysian state-owned investment fund with corrupt Malay politicians and diverted it to banks in (where else?) Switzerland, Singapore, and the Virgin Islands, moving through Middle Eastern royalty and Hollywood celebrities on the way (we’re looking at you, Leo). The theft, estimated at US$5 billion, ranks among the biggest cases of fraud in history. Low is believed to be in hiding somewhere in Asia.

It’s a story worthy to be handled by awesome Ms. Yeoh.

The minimum wage for Hong Kong’s foreign domestic workers increased by 2.5%, HK$110, to a new monthly rate of HK$4,520. The new rate will apply to all contracts signed on or after September 29.

Dolores Balladares-Pelaez, spokeswoman for the Asian Migrants Coordinating Body, said the government did not treat the domestic helper salary as a “working wage”.
“It is really a slave wage. Our demand is a living wage, which should be HK$5,500,” she said.

A survey showed two in every five foreign domestic workers in the city were taking care of elderly Hongkongers and not getting enough sleep or personal time. About 90 per cent of those who took care of the elderly also had to look after children and do household chores. The migrant worker representatives said the government was relying too heavily on domestic workers to provide elderly care.

4. Changes in Indian law (mostly for the better)

Lots of bans got revoked in India this month.

First, gay sex is no longer criminalised thanks to India’s Supreme Court ruling. “Any consensual sexual relationship between two consenting adults—homosexuals, heterosexuals or lesbians—cannot be said to be unconstitutional,” said the Chief Justice, Dipak Misra.

Following the rhythm, a court in India’s southern state of Kerala has ruled in favour of a lesbian couple who wants to live together.

Further, the court also struck down a colonial-era law which treated women as male property, ruling that adultery is no longer a crime. Previously any man who had sex with a married woman, without the permission of her husband, had committed a crime.

Last but not least, India’s Supreme Court has said women can no longer be barred from entering the Sabarimala temple, one of the holiest for Hindus. Previously, the temple banned barred women of a “menstruating age” from entering even though millions of devotees visit it every year. In the judgment Chief Justice Dipak Misra said that “religion is for one dignity and identity,” adding that “the right to practice religion is available to both men and women.”

5. Where is Fan Bingbing?

Fan Bingbing, the top actress in China, known in and out of the country, is nowhere to be found for over two months. Her last public appearance was at a children’s hospital on 1 July.

Is she under investigation for tax evasion? Is she under duress from the politically powerful? Did she file for refugee status in the US? Or is she departed? Rumors grow, but stay rumors.

One thing is certain: the Chinese authorities doesn’t like her anymore. This month, she scored zero out of 100 in the 2017–18 China Film and Television Star Social Responsibility Report, ranking last. It means that she’s seen as having contributed nothing to Chinese society. The study comes amid growing pressure by Chinese authorities on the entertainment industry and mass media.

“The message is clear: No one is safe,” said Stanley Rosen, a professor at the University of Southern California who studies China’s film industry.

September 16 was the birthday of Fan, who has more than 60 million followers on Weibo.

According to Wikipedia, judicial caning was a feature of the British colonial judicial systems, though it was never used in Britain itself. The practice is retained in Malaysia, Singapore, and Brunei. Unlike the other two countries, Malaysia has a separate system of religious courts for Muslims only, which can order caning for women as well as men.

Two of those cases made news this month.

Two women found guilty for attempting to have lesbian sex were caned six times in public at the Terengganu Syariah Court, as around 100 people watched the punishment. The federal minister in charge of religious affairs, Datuk Mujahid Yusof Rawa, said a public presence during sentencing should be reviewed. Women’s rights groups, Justice for Sisters and Sisters in Islam, claimed the sentencing was unlawful, as the caning punishment can only be administered to prisoners, but the duo were not imprisoned.

A single mother convicted of prostitution was also ordered to be given six strokes of the cane and jailed for six months by the Terengganu Syariah High Court. The court also ordered that the woman be whipped at the prison where she is to serve her time after 14 days, if she did not appeal against the sentence.

7. We need to talk more about Naomi Osaka

If this sentence doesn’t give you massive thrill down the spine, you’ve missed the world of tennis for last two decades.

In March, Osaka won the Indian Wells Masters. She beat former world number ones Maria Sharapova and Karolína Plíšková, before defeating current No. 1 Simona Halep in the semifinals. Before this tournament, she had never won a WTA title.

In September, she won the US Open, beating Serena Williams, the 23-time Grand Slam champion, in the final.

Osaka is known to have an aggressive playing style, with a powerful serve that can reach 200 km/h. Off the court, she’s the most soft-spoken 20-year-old lady you can see on TV.

It’s a shame that Western media talked more about Serena Williams’ dethroning and the racist cartoon that came out of Australia (the one depicting the African American Serena Williams as a primitive and the Haitian Japanese Osaka as blonde European girl. Yes, it did. No, don’t look it up). Because the headline of every paper should have been, “A Star Is Born.”

Philippine President Rodrigo Duterte has made jokes about rape multiple times. Recently, the president attributed the spike of rape cases in Davao City to the many beautiful women. And Filipinas are not listening quietly.

The feminist punk band, ‘The Male Gaze,’ fought back with lyrics like, “Why must we tolerate this crap?”

“This is not an issue that should be treated with just a shrug. The issue should not be made fun of,” the vice president said.