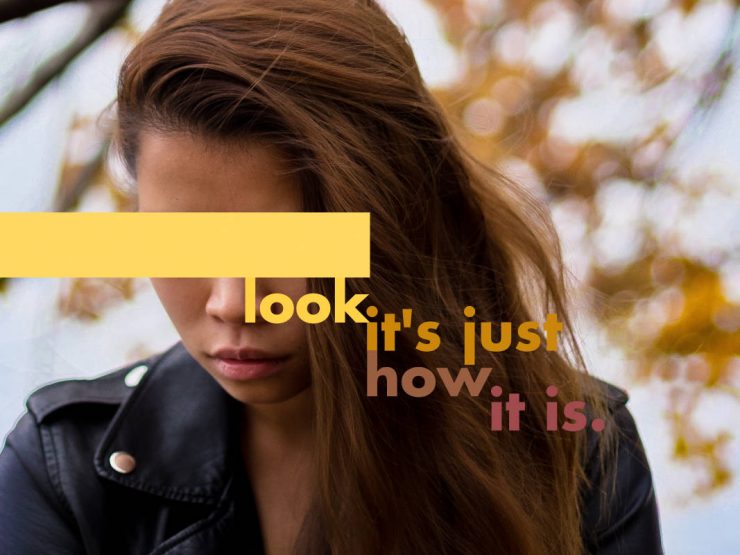 “What you did was messed up!”

Those words encompass how I felt about myself when I reflect back to one time I participated in “show and tell” during first grade. One of my classmates, Teresa, showed how she spoke to her older sister in Vietnamese.

As she did so, my hands flew to my ears like I had heard an intolerable screech. My “fight or flight” mechanism kicked in and I ran out of the classroom. At that time, I could not fully comprehend why.

My teacher ran after me and told me to apologize to Teresa.

Looking back, I’m glad she spoke out because who knows whether Teresa would’ve been teased by my classmates or felt ashamed about herself simply because of me. I thought I was the only one with a story like this. Except, I was not.

There were more stories from fellow Asian American women like Sandra Oh, who talked about disliking their own appearances or distancing ourselves from anything Asian because it wasn’t ‘cool’ in the eyes of their non-Asian peers.

I didn’t know there was a word to describe this experience until I listened to a lecture in a humanities class during my sophomore year of college. Academics labelled it internalized racism, which involves “maintaining or participating in the set of attitudes, behaviors, etc. ingrained in society.”

Things started to make sense. Many Asian American women like myself have learned a deep lesson from American society: our “Asianness” is problematic. And even though it’s not our fault, internalized racism is still a troubling and, unfortunately, common problem. When we exhibit it, we disempower ourselves and others.

How it affects us in real life

Internalized racism influences how we think about ourselves. TV Host Julie Chen, who recently faced backlash for siding with her husband and CBS Chairman Les Moonves in light of his past, documented how she was told by her White American boss to get her “Asian eyes done” in order to advance her career.

“More than half of Asian people are without a double eyelid and many of us are born with too much fat on the top of our eyes,” Chen stated, before concluding her story with how her career ‘sky-rocketed’ after her surgery.

This incident highlights how societal pressures convinced her to change her physical appearance. She internalized racism by believing the generalized racist statements about her appearance, rather than rejecting what American society had told her. As a result, she made the tough decision to physical modify her body with surgery as a response to the racism she encountered.

However, others have responded to internalized racism differently. Maka T., a 24-year-old acquaintance of mine, talked about how she “teased fellow Asians” in order to “gain acceptance from her White peers.” She elaborated further:

“When I was in high school, I said that the reason Asian men were so good at dancing was because they were ‘small down there’ and, therefore, flexible. I couldn’t articulate the correlation between my internalized racism and my self-hatred, and it wasn’t until my last relationship with a White man that I realized I needed to change. That relationship opened my eyes to the fact that no matter who I dated, well-meaning or not, they would never fully ‘get it,’ ‘it’ being defined as ‘understanding the racial struggles I face daily.’”

Afterwards, the video went viral, and she was called out by multiple news outlets as well as by several members of the African American and Asian American communities. Her internalized racism was reflected in her word choice and actions, singling out the African American group over groups of White Americans, and treating them more poorly. In this way she was asserting her assumed superiority over her African American counterparts by implying she was more deserving of the table.

In order to address internalized racism, we have to take on the uncomfortable task of bringing the topic to light. This alone can be such a difficult task that even academic scholars, such as Dr. Karen Pyke, were discouraged from bringing it up by fellow Asian American scholars. Our goal should not be to generalize the experience of Asian American women, but rather to see the pattern in our actions and look for its broader implications.

We also have to educate ourselves on the topic, both the academic research and the lived experiences. After all, everyone who has internalized racism has a real impact on other minorities, and even fellow Asians. These instances can lead to greater injustices.

Finally, we should call out the behavior when someone exhibits internalized racism. Two weeks earlier, I had met Teresa again and all she asked me was, “Why?”

That simple word was enough to make me freeze. On my knees and feeling low, I understood the impact that my actions had had on her and after our long crying session, we told each other how exactly we had felt about that whole situation way back in first grade.

Even though I was initially hurt, because I thought she was calling me out as a person, I realized later that her words were not about me personally, but about my actions and their social implications. She forgave me in the end and helped me realize that while it is important to check ourselves, it’s also ok to be human.